The Mysteries of Dinah's Fried Chicken 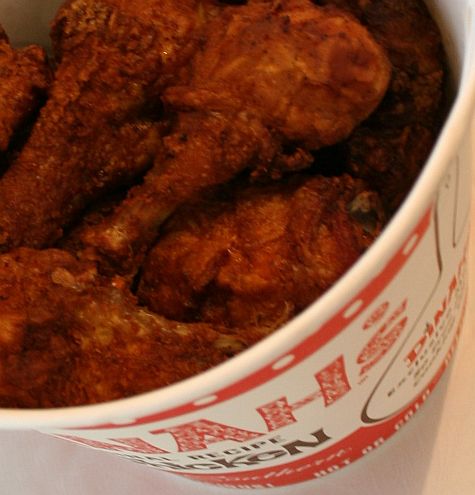 When Alan Arkin freaks out in the beginning of Little Miss Sunshine, shouting, “Again with the fucking chicken! It's always with the goddamn fucking chicken!” all I could do was stare at the instantly recognizable bucket and think, “How could anyone ever get sick of Dinah’s?” The fried coating is so highly seasoned and crispy. The meat is so juicy and tender. Alan Arkin should consider himself lucky.

Dinah’s Fried Chicken has been a Glendale institution since 1967.

Los Angeles is also home to Dinah’s Family Restaurant in Culver City, which is more of a coffeeshop. The Culver City Dinah's is known for its gigantic German apple pancakes, but it also has a chicken take-out in a separate part of the building. With the exact same buckets. With the same fried chicken. There is quite a bit of speculation on the internet about the two Dinah's. Most people assume that the same family used to own both restaurants, but that they sold the Culver City location. Some people claim the exact opposite - that the Culver City Dinah's is the original, which has sold the Glendale location. There are even rumors that it was once a chain. Nobody is very clear on the real story.

You only need to look as far as the pictures on the walls to see the authentic history of the Glendale Dinah's. It has clearly been going strong for two generations. The restaurant is now run by Dave Pearson, the original owner's son, and his wife Linda. So I decided to go straight to the source and speak to one of the current owners. Let me tell you, this was no easy feat because they certainly do get up early in the morning to get that restaurant humming.

So here we solve the great mystery of Dinah's. Straight from Linda Pearson.

40 years ago, a group of golfing buddies came up with the idea for Dinah's. They shared plans, recipes and logos, but the restaurants were each independently owned and operated. One family decided to build their Dinah's as a coffeeshop (The Culver City coffeeshop is now run by the original golfing buddy's step-grandson). The other families decided to open chicken stands, six in all. As time has worn on, one Dinah's after another has closed its doors. The last of the other Dinah's called it quits in Burbank ten years ago, leaving only the Culver City coffee shop and and the Glendale chicken stand. Although nothing has been said outright, I get the impression that the two Dinah's are not exactly on visiting terms.

There are no big naugahyde booths and no giant apple pancakes at the Glendale Dinah's. The little cafe is furnished sparsely with comfortable wooden chairs, and every table has a jar of their homemade apple butter. To keep it from being too plain, the room is gussied up a little with country-style doo-dads. The service is super-friendly, and if you are dining alone you will quickly make friends with the staff and other diners. It is a classic neighborhood joint. 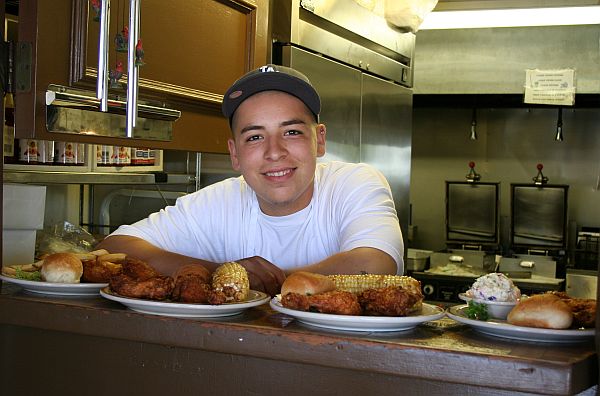 Although chicken is the big seller, Dinah's fried livers are pretty famous. I'm not a big fan of chicken livers, so I thought I'd try the deep fried gizzards on my last visit. I’d eaten tough, chewy gizzard gristle at family dinners and later cooked with them, struggling to find edible bits for my dirty rice. Dinah's gizzards were a revelation. I had no idea it could be like this. They were crispy and crunchy on the outside, yet they melted in your mouth. I finally understood how some people can eat rocky mountain oysters. If they are anything like this, I would eat them too. Yes, I said it. If they tasted this good, I would eat balls. These gizzards would be perfect at a bar, where I could snack on them all night while drinking beer (Dinah's is reputedly BYOB). I enticed a lady at the next table to try some – I am kind of aggressively friendly. When she saw that I was abandoning a half-full plate, she asked if she could have the gizzards wrapped up to take home. They were that good. 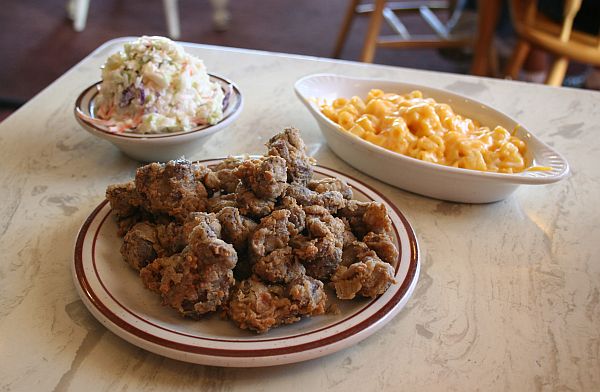 The side dishes are equally famous, and people seem to either love them passionately or find them a little too unusual. These are definitely not your same old sides. I love the pineapple cole slaw, but there are people who can’t deal with the sweetness. The macaroni salad has a little touch of powdered mustard and fresh garlic. If you eat enough of it you can feel the slow burn of garlic creeping up on you. I will admit, you do have to eat the macaroni salad right out of the big tub with a fork to achieve that burn. Not that it's something I have ever done, mind you. Their newest offering, Mac and cheese, also kicks ass, which should make a certain cheese-loving LAist very, very happy.

The only dish I can't really recommend is the fish and chips. The chips themselves are fantastic. Some of the best french fries around. But the fish is in a breadcrumb coating instead of Dinah's fantastic batter. So although they are servicable, they are missing the zing and Dinah's signature crackle. There are just so many other great options on the menu. Besides the crave-worthy gizzards, juicy chicken, and fun side dishes, the rolls are fresh store-bought, and the delicious little pies come from Martinello’s bakery. 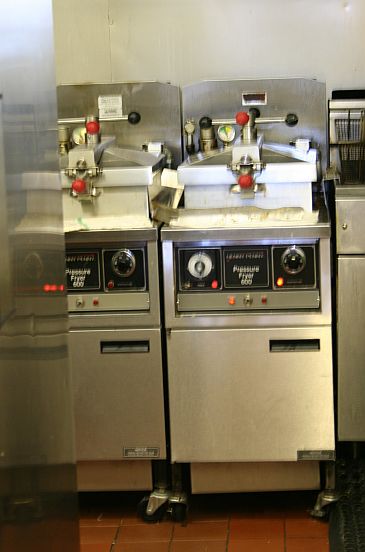 There are two more mysteries that need clearing up before I go. What is their secret frying method? What makes the fried chicken “Oh so free of oil” as the bucket boasts? The secret is a deep-fryer with a pressure-lock lid that turns it into a pressure cooker. So it is basically deep-fried and pressure cooked at the same time. Pressure-fried. Crispy on the outside, juicy on the inside.

The final mystery has to be, just how long does it take to get sick of Dinah’s fried chicken and have an Alan Arkin meltdown? I bought a nice big bucket to take home for research purposes. I didn't even get the giant bucket. The answer? Three days. No matter how good it is, after three days of nothing but chicken you never want to see one of those buckets again. Until about a week later. Of course, I have not yet tried this experiment on those meltingly tender gizzards. Maybe with a few gizzards thrown in now and then, Alan Arkin might not have snapped. 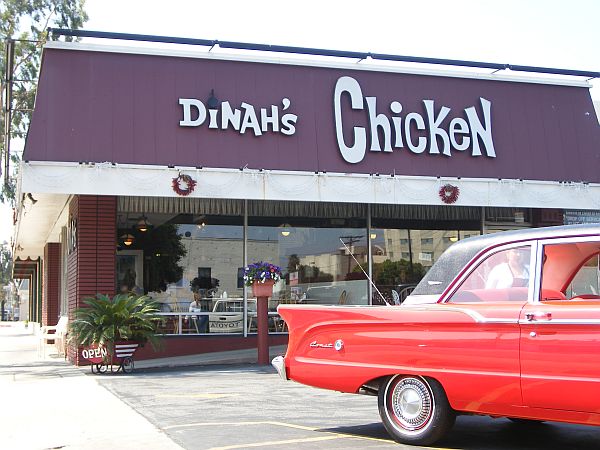