An Official Song for LAX

Guest Day Editor LA City Nerd will be joining LAist with a few posts throughout the day. Read the introductory interview here and check out the nerd's blog. 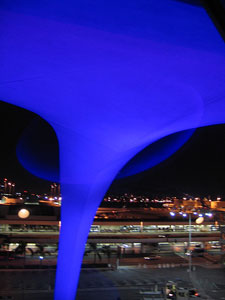 Back in the 1970, a song was written aptly titled LA International Airport (It's actually available in the iTunes Store). It was a crossover hit for country singer Susan Raye in 1971 when reaching #9 on the country charts and #54 on the pop charts.

On the occasion of LAX's 75th anniversary in 2003, an official City proclamation made by the head of the LA World Airports designated the aforementioned song as the "official song of LAX."

Now, since this was not adopted by the City council, is such a proclamation completely valid? Is this process enough to make it official citywide? If so, perhaps the DWP should proclaim an official song, too? Perhaps TLC's Waterfalls? And the Parks Department could use Saturday in the Park! I guess it doesn't matter if a department has a song or not if it doesn't get played.