"You Are The Star" to get a Facial 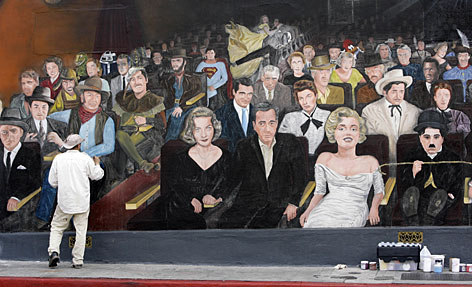 Thomas Suriya of Taos, New Mexico had never painted a mural before, or even a portrait. and yet in 1983 he busted with an iconic Hollywood mural on his first try.

Now 24 years later he has returned to LA to give "You are the Star" a touch up.

Thanks to a grant by the Hollywood Arts Council, 59-year-old Suriya is back in town to put some life back into a mural that has been taking all Hollywood can give over two decades.

Before he came to Los Angeles, Suriya was living in the Northern California mountains with friends, including Michael Attie, whose parents owned the building [that the mural is painted on] and ran a lingerie store on the ground floor.

"It was a leap of faith on his part and an adventure for me," he said. "It was pretty intense."

He went on to paint other murals in the city and work as a special effects designer. In 1993 he and his partner, Francine Harrington, moved to Taos, where he paints still-life and desert landscapes and exhibits in local galleries.

"Now I look at it (the mural) and it looks so rough," he said, pointing to James Dean's hand. "I was so ambitious." - AP

Proof that those lingerie shops on Hollywood Blvd. add more to the street than people give them credit for.