by Lindsay William-Ross in Arts & EntertainmentMiscellaneous on July 13, 2007 12:00 AM
Tweet 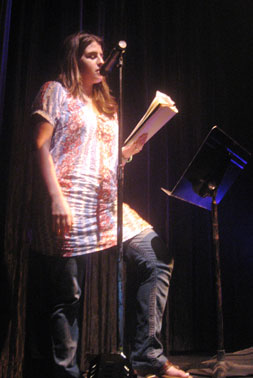 There's a box that generally lives on a shelf in my closet that holds pretty much every single journal, diary, and notebook I've kept since my mom brought me back my first diary (a lavender lock-front Minnie Mouse book with "Journal Intime" embossed in gold block letters) from a trip to France when I was nine years old. I will confess readily that I love to pull that box down and rifle through the pages of my life, sometimes chuckling heartily at my own naivete or hyperbole, sometimes wanting nothing more than to reach out and give my younger self a hug.

Of course, I'm not the only person who kept written records of varying vigilance of my once and former exploits, heartaches, musings, ponderings, and yearnings. In fact, there exists currently a slew of now adult diary-keepers who have mined their own gold and turned it into what makes for an evening of unprecedented laughter and entertainment called Mortified. What could easily pass as embarrassing in any other context comes off live on stage as comic genius. For the brave performers—or rather readers—all it takes is the courage to laugh at their past selves; for the audience it doesn't take much more than a phrase or two of sheer teen angst to get laughing.

Mortified, which bills itself as "a Comic Excavation of Adolescent Writing, Art & Media, PS It totally likes you," is the brainchild of producer Dave Nadelberg, who cemented the concept of having folks read their old journals, love letters, lyrics, or notebooks in front of willing strangers in 2002, after having shared some gems of his own with friends a few years before. Mortified is now operating several "chapters" nationally (Boston, Chicago, LA, NYC, San Francisco) and is seeking to expand to Portland (OR), Austin, and DC. Yes, you heard about them on NPR's This American Life. Yes, those are the real people reading their real diaries. Yes, you can get up there too—they're always looking for new material, so check out their Casting FAQ page.

I hit up the June show a couple of weeks ago, and was treated to seven people's humor and/or heartaches—funny how in retrospect those always seem to go hand in hand. While the content ran the gamut from a tragi-comic first romance to under-appreciated trips abroad to rural Nebraska's unknown rapping genius and more, the core of each piece tended to be the humility and humanity that stem from childhood and adolescent experience as reflected by those who emerged relatively unscathed and much the wiser. 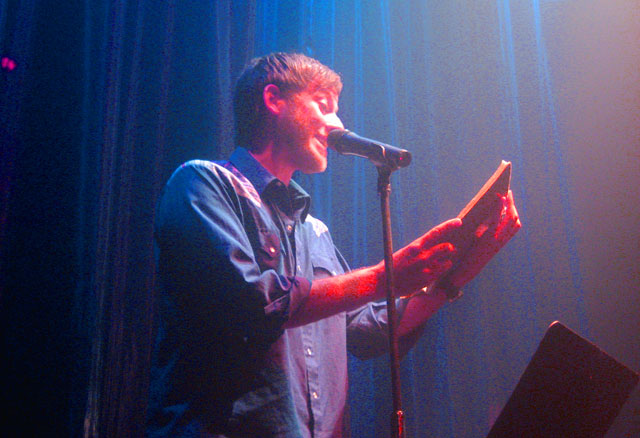 The show began with a brief welcome from Nadelberg, and a kick-off tune from The Mortified Afterschool Orchestra, who play a range of familiar tunes reinterpreted to include the use of classic young folks' dorky instruments, like the recorder, accordian, and tuba. First up was Scott Lifton (pictured above) who chronicled the ups and downs of his first teen romance, complete with its instigation, the "do I like her or don't I?" phase, the heavy petting, and the inevitable breakup. One hot encounter found them at Scott's house, where he describes the romantic scene as follows: "My mom made us English Muffin Pizzas while we watched Heathers."

Next was Jamie Rubin, who found herself abroad amidst the majestic sights of Japan, Italy, and Israel, but seemed fixated on eating awesome food like burgers and fries, and found herself enchanted with shopping in Italy and disenchanted with her tripmates in Israel. Rubin's diary held a rhapsodic and lengthy description of her visit to one of the holiest spots in all of Rome: McDonald's. She elaborated on the marble, the floors, the artwork, the menu choices, and the awe of it all. Afterwards, her group attended a seminar about the existence of God. Her reaction managed to be succinct and contained: "It was ok." 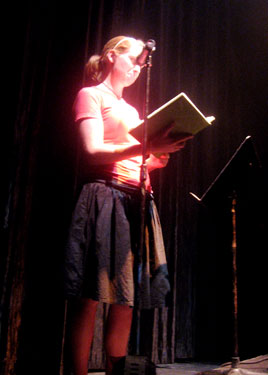 Other readers that night included Shaun Parker, who presented the two videos he made in the 80s as part of his "4-year plan" to seduce his friend Heidi--the first to woo her (as indicated by a dream vision he had) and the second to recover from the sting of her rejection. Both featured Parker in classic 80s bad fashion, lip synching to metal hits, and hallmarked the pitfalls of dubbing using the technology of "two VCRs." Watching Parker's heartache and heartbreak unfold on video and in the letter from the object of his affection that he read was both gut-wrenching and hilarious. Parker best emphasized the lengths we often go to, and the passion with which we experience our lives, in order to win the heart of someone. It was pathetic--but also poetic, and one of the night's most sincerely beautiful and audience-pleasing moments.

Nellie Stevens (pictured at the very top) chronicled one very active summer of "scamming" with the boys, Katy Lee (pictured above) spent her middle school years dreaming of having magic powers while hating herself and her whole life, Corey Taft suffered popularity exile until his rapping alter-ego "The Usher" (he held that job in a movie theatre) brought him temporary and fleeting peer adulation, and Will Seymour (a Mortified regular) was reviewed by an embittered local critic as being "fey" in his high school play performance. (For more of Seymour's fantastic work, including his fondness for inexplicable shoplifting, his friendship with his mom's boss Liza Minnelli, and his addiction to the Guiding Light, check out the Mortified book--we reviewed it here on LAist in December 2006.) Man, Taft's rapping was one of the most sidesplittingly horrific moments of the night--in a good way. Peppered with foul language and misogynistic phrases, his lyrics were just awful enough to be funny, and lacked rhythm enough to be forgiveable, although his "comeback" rap, featuring Lifton's deft beatboxing, was epic--and bad--enough to be more than memorable. 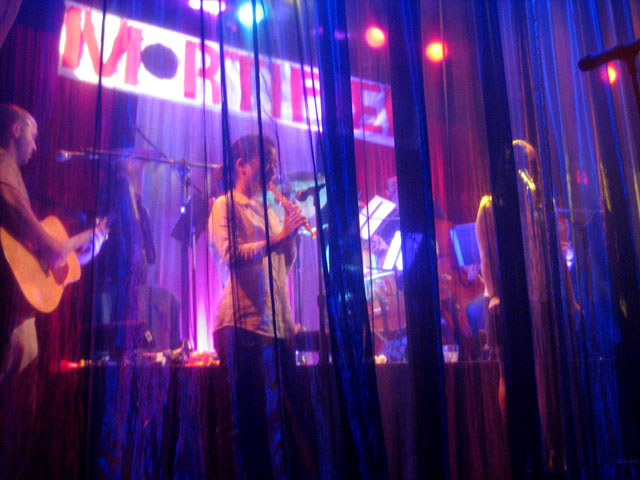 In between sets, the Afterschool Orchestra played some awesome tunes. 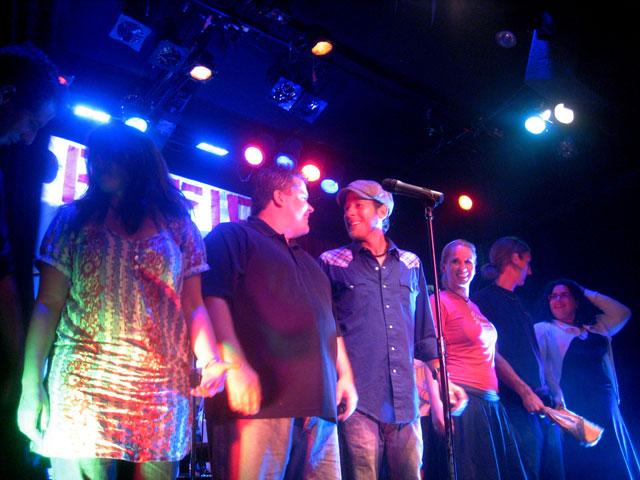 At the end of the night, my sides hurt from laughing so much, and I'd developed an acute hankering to drag out that cursed box of my own diaries. I'm going to have to give them another heartfelt once-over; I've got some angst too, and I think it's laugh-worthy. But being a spectator is more than sufficient for now, and I'm telling you, if you want a night to remember, you'd best do yourself a favor and check out the next Mortified. There are surely plenty of things you did as recorded in your old diaries you regret, but this certainly won't be one of them.

All photos by Lindsay William-Ross for LAist