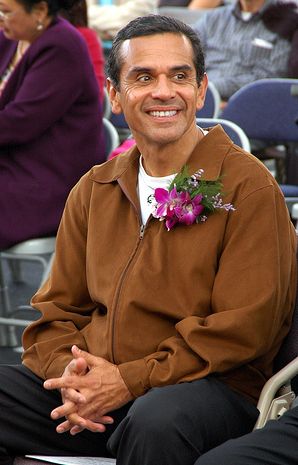 Now that his extramarital shenanigans with Telemundo newscaster Mirthala Salinas have firmly supplanted his other accomplishments in the eyes of many Angelenos, pundits' tongues are a-wagging over the potential ramifications to his long-term mayoral career. Or, put more simply, can he move beyond Mirthala?

While some commentators, such as San Jose State's Larry Gerston, have already written off Villaraigosa's future prospects, advising him not to "make any plans to run for the Democratic nomination in 2010," others have adopted a more cautionary view, citing voters' forgiveness (it helps that he didn't pull a Clintonian "I did not have sexual relations with that woman") and the fact that he still has half of his four-year term left to brush off the affair. "If the public trusts you to do the right thing in your capacity as a public official on issues impacting them and their families — schools, public safety, transportation, jobs — then you can survive the personal issues regardless of whether they do or do not trust you personally," said Democratic Party guru Chris Lehane.

Villaraigosa and his staff have clearly taken that advice to heart: starting Monday, they plan on unveiling a raft of announcements meant to burnish his (tarnished) credentials and show that he is first and foremost focused on his job as mayor. His first big announcement already sounds like a winner: fill 350,000 potholes over the coming year. But whether such "thrilling" initiatives prove to be enough to rally support for the beleaguered Villaraigosa remains to be seen.

With the media's laser focus likely to remain on details of his affair and the fate of Salinas, it will be very difficult for the mayor to shift attention away from his highly publicized gaffe. However, as did NY Mayor Rudy Giulani and current SF Mayor Gavin Newsom before him, Villaraigosa's aides hope he'll be able to bounce back in the long term and regain some of his spent political mojo. He's likely to retain his role as one of Hillary Clinton's primary presidential boosters, and many believe he would still be a formidable candidate for the 2010 gubernatorial election.

Perhaps Villaraigosa would be best advised to follow the suggestions of Leo Braudy, an English professor and mass media expert at USC: "don't get caught again, put your shoulders to the wheel, your nose to the grindstone, your eye to the ground and all that stuff and get to work." Sound advice.