Cheese is the New Wine 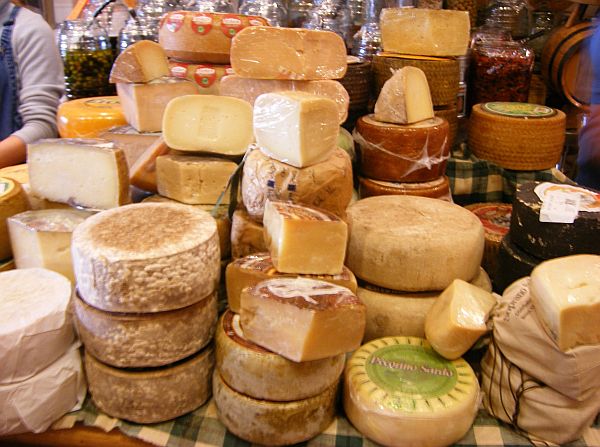 I love food. I love talking about food. I can spend hours discussing the merits of different mustards, or trying to figure out the mystery flavor in a pasta sauce. But I think food should be accessible. It should not be intimidating. I avoid saying things like ”flavor profile”. I am more likely to say things like, “This gravy is so good I want to fill a jacuzzi with it and jump in naked.”

My dislike of culinary pedantry can probably be traced back to the family dinner table. My brothers are all wine snobs, oh, sorry, I mean connoisseurs. It always annoys me when they get out their wine gadgets and start arguing. They throw around terms like peppery finish, a nice mouth feel, and notes of raspberry. It sounds so pretentious.

I was excited when cheese shops started opening up all over town; it could only mean new flavors, and new things to talk about. Up until now, making a cheese plate had always been pretty standard – one soft, one medium, one hard and one bleu. Easy peasy. Brie, Jarlsberg, a good Pecorino. But since I am not a big fan of bleu cheese, I usually substitute something like a smoked gouda. Throw a bunch of grapes on the plate, and voila.

With the recent profusion of cheese shops, things have gotten a little more complicated. No problem. The cheese shops in Silverlake have always approached it, like, “Isn’t this fun? Let’s explore the fabulous world of cheese together!” They have the natural enthusiasm of a true hobbyist showing off their collection. So I have learned more about sheep’s milk vs. goat’s milk, and the richness of triple crèmes. I have fallen in love with their precious little artesanals. Who can resist a cute round of goat cheese wrapped in grape leaves and tied up with string?

But things are starting to get out of control.

Today I walked into a cheese shop in Beverly Hills. I asked the man behind the counter, "Are you familiar with Purple Haze?" He said, "Yes. WE don't carry THAT one." He said it as if I had asked for Velveeta (And I'm not knocking Velveeta. Velveeta has its place). Was he really scoffing at me? I felt like Julia Roberts in Pretty Woman . Was I going to have to call in Richard Gere just to buy some fucking cheese? The cheese man stared at me impatiently. I said, "OK then, I'd like something soft, maybe a triple crème, and something medium, kind of nutty. I don't mind if it's feet-y, but I don't like it cave-y." He stared at me as if I were speaking Martian. I became flustered. I tried to clarify, "You know, cave-y, cave-aged. I don't like it when the cheese is black." He nodded at me suspiciously, but returned with three different cheeses, from which I selected two.

While my cheese man wrapped up my order, the other counterman and the guy next to me were talking about sports cars; their smoothness, their power, their sleekness. I wasn't really listening to them, but it was hard to ignore their fervor. They got louder and louder, more and more intense. They were in a full-on pissing contest when I heard the cheese man challenge the customer, "Come on, step up to the plate." The customer was shocked, "Step up to the plate? Did you just tell me to step up to the plate?" They locked eyes and their nostrils flared. My cheese man tried to intercede by offering the customer a sample of one of my selections. But the customer kept his eyes firmly locked on his cheese man's eyes. He didn't even blink. He was in a stand-off. Slowly I realized what was going on. All this testosterone, all this one-up-manship. They had not been talking about sports cars at all. They were talking about CHEESE.

(Photo by Elise Thompson for LAist)