It was bearable until the talking started

Before I even start this, let me just say that I fall WAY outside of this movie's target demographic, so I'm expecting to be shouted down by hoards of Red Bull-addled teenage boys about this. Also, this movie will probably make more money than we've spent on Iraq in the past three years, but what the hell.

Don't get me wrong, there are some awesome car chases and explosions (which are interrupted by lame attempts at plot and an awkward love story), and some interesting comic relief (a robot disguised as a car who communicates by dialing bits of songs from the radio, and a chihuahua with his foot in a cast for some reason who pees on a robot's foot for.. well, some reason) but about 3/4 of the way through the movie I just wanted it to end. 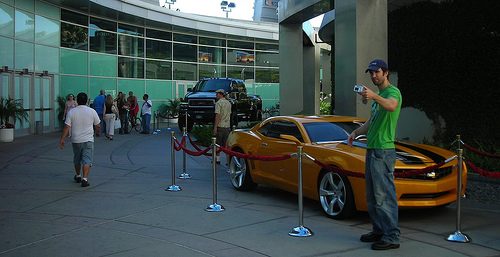 Sensory overload aside, the main problem with Transformers - aside from it being just too fucking long - 2 hours and 23 minutes for a movie that very well could have been 80 minutes (and would have been a lot better had some of the fat been cut, so to speak) - was the attempt to force a moral point.

The Transformers themselves (the good ones, at least. We never really get to know the bad ones. Fine with me. That damn movie's long enough already) are agents of good (or something) and the leader, Optimus Prime, seems to break into lectures about humanity, life and whatever (or something) on a moment's notice.

That's a bit much coming from a cheap plastic toy which made a thin premise for a Saturday morning cartoon.

What I wanted was for one of the movie's army guys to shoot it in the face just to get it to shut. the. fuck. up.

Actually, that's not true. What I really wanted to do was to get up and take my bleeding ears (the movie's really loud and the robots make some sounds which are remarkably like nails on a chalkboard) and aching eyes and leave.

But, since I was at a screening sitting right in front of Mr. Bay and his, um, special friend, I had to sit there and just take it.

Michael, Michael. This has got to stop. Listen to me very carefully:

Why do you keep trying to insert ethical lessons into action movies? Leave the moral high ground to film students and the French. Just make stuff blow up.

That, you do very well, and when you do what you do, you make a good 'turn your brain off' shoot 'em up action movie, which is precisely why many of us pay for a ticket - which helps to keep you obscenely rich.

We do not pay the inflated ticket prices in order to get a fucking lecture from a Mack truck or whatever that thing is.

If you're not careful, you're going to piss off (or worse yet, bore to the point that they figure out watching chick flicks will get them laid) that coveted young single male demographic who are hyped as hell about the explosions in this movie and are going to push your box office numbers into the stratosphere. 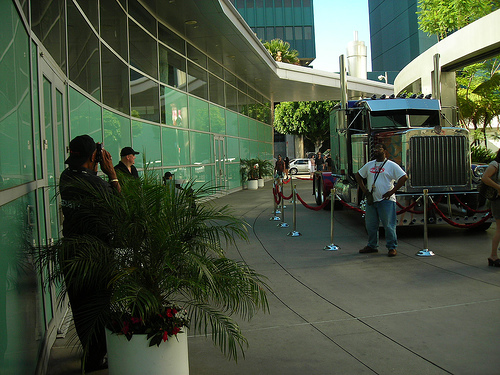 Trust me, Michael. You do not want to lose these guys because if you do and you end up making movies for people like me, you'll end up living in a cheap apartment in Hollywood and driving to Sundance in a rusted-out 87 Volvo, praying to make it over the mountains. And then you'd have to watch some serious chick flicks to get laid.

All photos by Peggy Archer