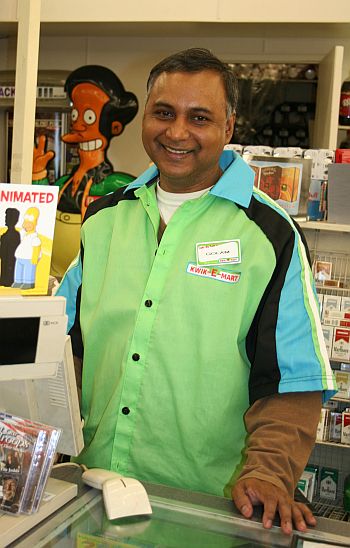 The 7-11 at the intersection of Olive and Verdugo in Burbank has temporarily been converted into a Kwik-E-Mart. It was re-done late Saturday night and will remain a Kwik-E-Mart for the next month to promote the upcoming Simpsons movie.

Eleven 7-11s in the United States and two in Canada have been converted into Kwik-E-Marts as part of the promotion. DCist has their very own Kwik-E-Mart in Bladensburg, MD.

Golam, Burbank's friendly counterman, was having a lot of fun shouting, "Welcome to Kwik-E-Mart!" as each customer walked in. The other employees were rushing to re-stock cartoonishly pink donuts while the 7-11 rep made frantic calls on his cell phone demanding more Buzz cola, "Send me everything you've got! It's ALL gone. Everything."

Watch for specially marked merchandise to enter a contest to appear in a Simpsons episode.

7-11 has hired security to handle the anticipated crowds, and the news vans were already pulling up as I was leaving at 4am. I have a feeling that perky, "Welcome to Kwik-E-Mart!" is going to sound pretty exhausted by the end of the day.