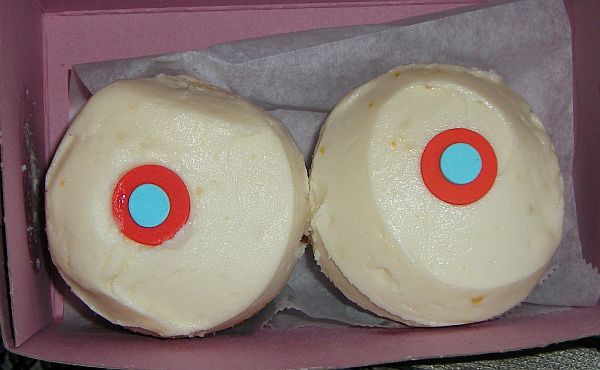 Aaaah, Beverly Hills - Los Angeles' beacon of wealth and privilege. I don't think I've been there in over ten years. But on Tuesday I had an entire day to just wander the streets. Normally, I don't trust popular opinion. Maybe it's because I grew up in the 80s, when popular opinion gave us big shoulder pads, bigger hair, the Star-Wars defense system, Hall and Oats and Chubacca-like eyebrows. But that mistrust caused me to deny myself Nirvana, Anne Rice, and Krispy Kreme donuts for many years. So maybe I should just give some popular spots a chance. I decided to spend the day checking out the places everyone loves, and everyone else loves to hate.

(More after the jump) 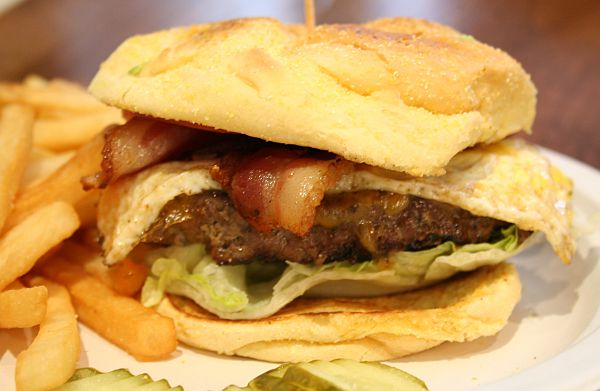 Zagat Buzz had mentioned the "notable opening" of Burger 90210. The name was so wrong, but the promise of hundreds of different burger combinations was so right. Everyone there was so nice, I really wanted to like the place. I really did. There are about 10 different burgers, and then a bunch of build-your-own-burger toppings. I thought I'd try the Brit Burger, which had an egg on it, and my husband, Bob went for bacon and avocado. The burgers were so thick. They were overwhelming. I could only eat a few bites. Maybe I'd go back if I had an iron deficiency - or was crazed with PMS. The bread was squished, like flatbread. I have heard they use LaBrea Bakery buns, but they were awful. Maybe they set a box of meat on that batch. Or maybe the thinness was to emphasize the massive meat (I wish I could put an echo effect on my voice here). It was just too much. The burger somehow managed to be greasy and dry at the same time. But the toppings were excellent. The egg yolk broke just right (If you are a Fatburger fan, you know what I mean), the bacon was flavorful and the avocado was at its peak of ripeness. The french fries were serviceable, but the onion rings were ridiculously greasy. As I looked around the white, vaguely space-aged "Milk Bar" diner decor, it hit me. I felt like I was in an American themed restaurant in Europe. All of the components were there, but everything was just slightly off. 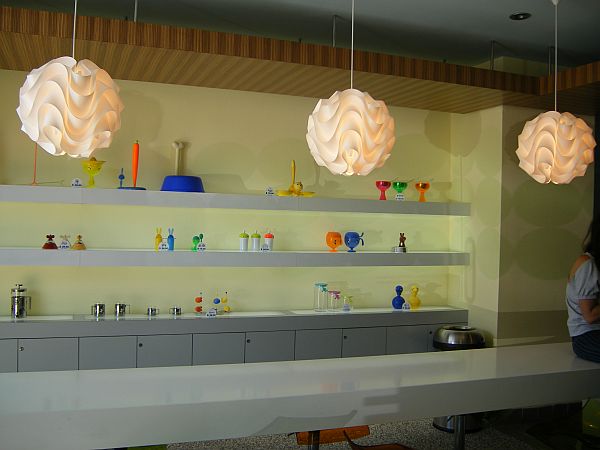 Of course, the next stop in my Anthropological investigation had to be Pinkberry. I walked in like a drunk sailor entering a tattoo parlour - knowing I would regret it, but with the irresistable lure of thrill-seeking. I liked the decor. I liked the round lamps and the wall of strange Pinkberry paraphernalia. I ordered green tea with the only thing that seemed to go with green tea, little white chips. Yogurt chips? White chocolate? I wasn't sure, but at least they were not Fruity Pebbles. I thought I was prepared. I really did. But there was nothing that could prepare me for that. Nothing. I couldn't help but exclaim,"Oh my God! What is this MADE out of ??" The "Super Sweet 16" teens looked at me like I was from another planet. A guy at the next table offered helpfully, "goat cheese?" And his friends laughed at him. But that was exactly the tang it had. I think I have broken the recipe. Take some goat cheese and remove everything that is good about it. Remove all of the the fat and creaminess. Then vaporize it so it turns into a gas. Now freeze that gas. And that is what Pinkberry tastes like, tangy, frozen air. (Pinkberry is PEOPLE). 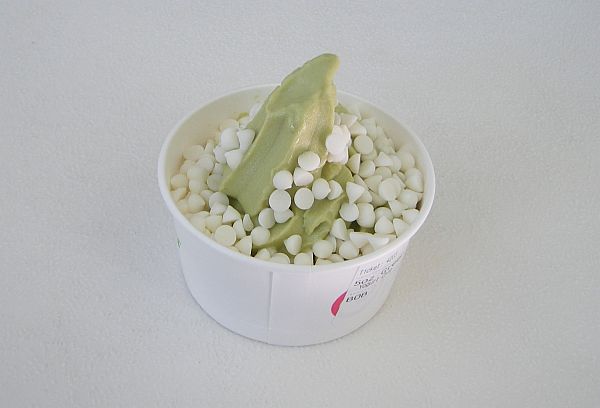 I think this neighborhood around the 400 block of Beverly is on the "wrong side of the tracks" of Beverly Hills. Almost every storefront was a fast food chain. Then, as if to prove to me that this really was the sticks, or that white trash chic has fully taken over, I saw that horror of horrors, the mud flap girl. She has transcended the trucker tire and will be spattered with mud no more. Thanks to you, Ashton Kutcher, Mud Flap Girl has finally made it. 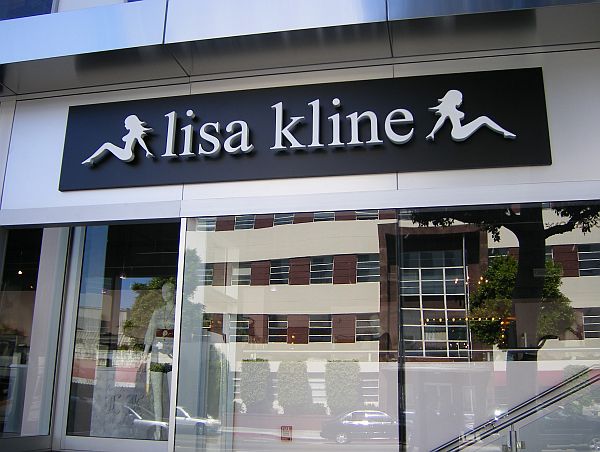 What else could possibly be on my list but Sprinkles? So we headed over to the ritzier section of Beverly Hills, on Little Santa Monica. Their selection changes daily, and it was a Tuesday. We got red velvet, black and white, orange, lemon, and chocolate. My teeth are still aching from the sugar. I didn't realize it was possible to stuff that much fat into a cupcake. Maybe the fat they are siphoning out of Pinkberry is being pumped through an underground pipe to Sprinkles. The chocolate flavor in the chocolate cupcake was not very pronounced, and the sugary frosting overwhelmed any flavor that was there. The red velvet was slightly better because of the cream cheese frosting. They did well with the lemon and orange. The flavors were intense enough to hold up to the fat and balance the sweetness, and the cake was light and spongey. It seems like the people who love Sprinkles the most are cute, thin girls who are splurging and going off their strict diets. I think they are in some kind of sugar withdrawl and the only way to stop the shakes is by mainlining. 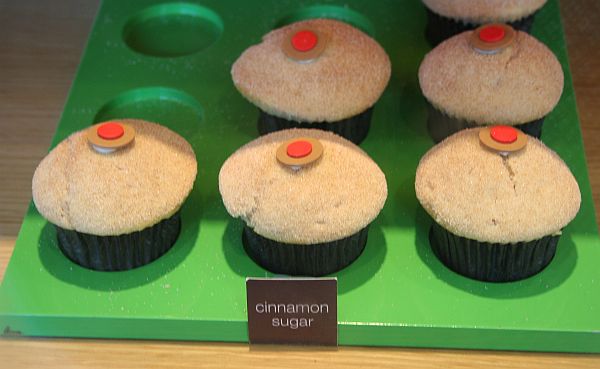 Those Sprinkles fans better slow down, though, at least from the looks of the magazine rack I passed. Smoky eyes, sunken cheeks, greasy hair...it looks like heroin chic is coming back. Get ready to starve yourselves into the negative sizes, girls. Slowly back away from the cupcake. 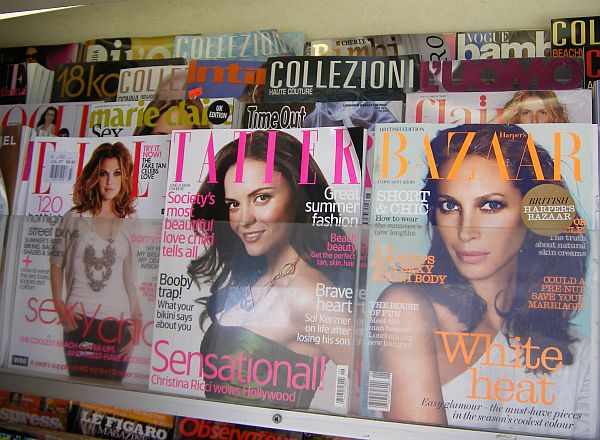 I knew as soon as I threw away my hypodermic needles they would come back in style again. 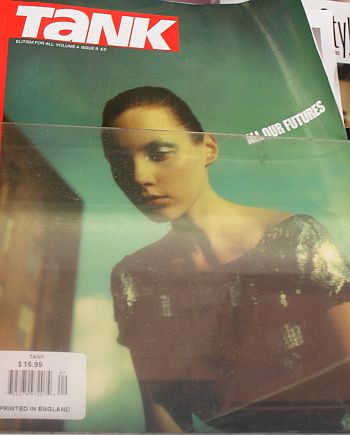 (All photos by Elise Thompson)