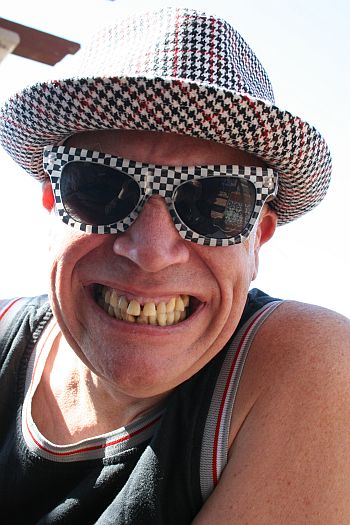 There will be a rare performance of ska legends Bad Manners Monday night at Safari Sam’s. One of the few original ska musicians still performing, frontman Buster Bloodvessel is a survivor in more than one way. This is their first U.S. performance since Buster’s near-death experience six years ago. He has managed to not only bounce back, but is in incredible shape and ready to continue spreading the joy of skanking around the world. Perhaps best known in the United States for the hit, Lip Up Fatty and performance in the movie Dance Craze, Bad Manners went on to record an impressive number of albums, amassing eleven Top-20 hits.

LAists Bob and Elise joined Buster for a nice lunch in beautiful downtown Corona yesterday. We discussed his remarkable recovery, his many business ventures, and his plans for the future, as well as getting some serious schooling on the history of ska.

After making it big, Buster didn’t just kick back on his own private island, but helped to promote ska music with a now-defunct record company, and an annual ska festival (Badfest) that is still going strong. In fact, big things are in the works for the future, with possible musical events aboard a ship (The Blood Vessel), a music event spanning multiple cities all across Europe, and maybe even a festival on that private island (Yes. He really owns an island. It’s a few acres on a river in London, but it’s a fucking island).

When Buster dreams, he dreams big. He once opened a hotel, Fatty Towers (a la Fawlty Towers), geared towards the plus-sized vacationer, complete with oversized furniture, giant tubs, huge gourmet feasts and an eat-it-all-and-it's-free lumberjack breakfast. He also ran for mayor of London. My favorite part of his platform was "Free tampons for unemployed women." When his keyboard player, Rich, saw my scribbled interview notes with "tampons" written at the top, he teased, "I thought that was your shopping list." So I added "Milk" to the bottom of the page.

Unfortunately, Buster's ill health caused him to collapse onstage over ten times. His big plans were cut short when a case of Meningitis nearly had him down for the count. In his feverish dreams, he often thought he was onstage, and treated hospital visitors to impromptu performances. After the meningitis cleared up, the doctors sliced him, diced him, and marked him with a "B". Once he was on the mend, he committed himself to a healthy diet and exercise regimen, and he may need to change that song to Lip Up Skinny pretty soon.

We talked about how English 2-tone ska developed in the late 70s out of a group of skinheads who lived in integrated neighborhoods and primarily listened to reggae. There was one band he recalls as heavily influencing the sound by slowing down the beat. That now-forgotten band slipped into obscurity, but they had started something that Bad manners continued. Buster also enjoyed the beginnings of the London punk movement. In some ways Bad Manners incorporated more of the punk ethos than many of the other ska bands, eschewing the two-tone suits for anything-goes fun, often wearing elaborate costumes onstage. There is an urban rock legend that Bad Manners was banned from Top of the Pops after Buster appeared dressed as Henry the VIII. He cleared that rumor right up for us. The real reason they were banned was because he painted his big bald head yellow with a big red dot in the middle so he would look like a giant zit. Top of the Pops was angry because it caused a glare and ruined their lighting. In one of his earlier Top of the Pops performances, he sings Lorraine to a blow-up doll. It is a song about wanting to kill his girlfriend. Sound familiar? He didn't seem upset that Eminem used that same schtick, but he wanted to point out that in the end of his song, they do make up. He doesn't put her in the trunk of his car or anything. Nevertheless, that song did cause a big scandal amongst feminists at the time.

A little less scandalous these days, Buster is predicting perhaps one more tour after this one, and then concentrating primarily on festival planning. Bad Manners continues to record, and has recently put out a new CD called Stupidity, which includes the traditionally skankable Happy and Manners Knees Up, as well as a spooky cover of Teddy Bear's Picnic.

So tomorrow night, put on your dancing shoes and head down to Safari Sam's! Lip up, Fatty!