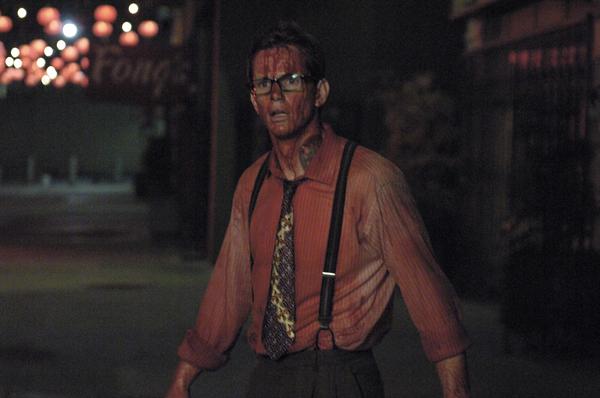 The universe of The Wizard of Gore is a dystopian downtown Los Angeles, half-Suicide Girls, half-Blade Runner. Into this world comes Ed Bigelow (Kip Pardue), a peculiar sort fond of bespoke suits and horn-rimmed glasses. Along with his girlfriend Maggie (Bijou Phillips), he attends a magic show presided over by Montag the Magnificent (Crispin Glover). There they see a trick that startles everyone. To the horror of the audience, Montag eviscerates a woman on stage. As everyone begins to panic, the lights flash off. When they return, the woman stands on the stage completely fine, her intestines safely returned to the comfort of her body. 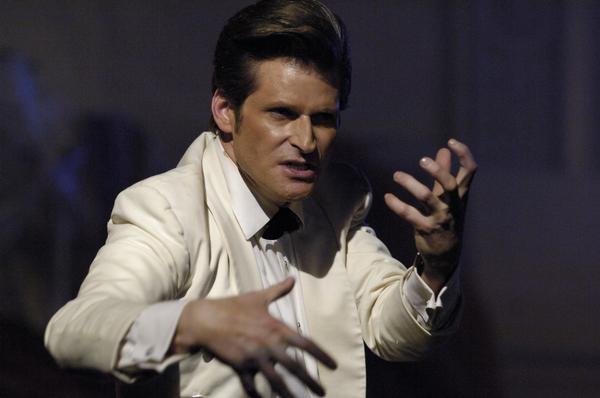 Ed is fascinated by the trick and returns the next night to see Montag perform it again. The mode of death is different, but the result is the same. A dead woman seemingly returns to life right in front of everyone’s eyes. Ed is perplexed, unable to figure out how Montag is doing it. Things take a darker turn, though, when the women from the show start turning up dead 24 hours later from injuries similar to the ones inflicted by Montag. Soon enough, Ed is on the investigation. He turns to Jinky (Joshua John Miller), a friend in the coroner’s department and Dr. Chong, (Brad Dourif, in full freak mode), but neither is able to help him solve the mystery of Montag.

The ultimate resolution, while not entirely satisfying, is both logical and resonant. The film’s real success lies in the tableau it creates for the audience. The gloomy world of The Wizard of Gore is captured perfectly by DP Christopher Duddy, relying heavily on dutch framing and long tracking shots. For a low-budget feature, the production design and gore fx are excellent in conception, design and execution. In a bit of stunt casting, actual Suicide Girls are used as Montag’s victims, but the effect is wonderful. They are both sexy and casual in their nudity—natural performers.

The ultimate credit, of course, goes to director Jeremy Kasten who has assembled a movie far more ambitious than the typical horror flick. While I would have liked to see a bit more from Phillips, Glover and Pardue deliver solid and, in Glover’s case, inspired performances. I honestly didn’t expect much from The Wizard of Gore, but I was pleasantly surprised by how much I liked it.

Photos Courtesy of The Wizard of Gore