WHAT in tarnation IS IT? 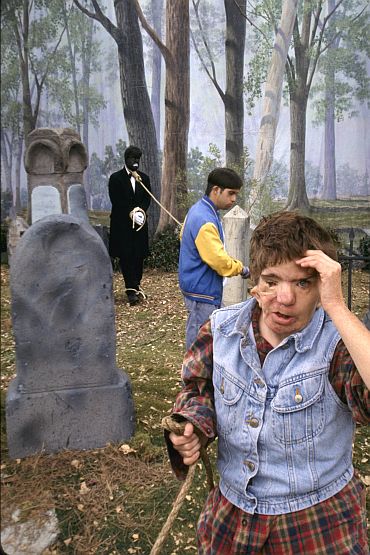 Crispin Glover's 2006 directorial debut, "What is It?" is being trotted out once again this year, along with the Crispin Glover Show, complete with exclusive interviews and curious media hype. Today I deliver to you a slightly more critical perspective than the review that accompanied last year's LAist interview.

I also attended last year's screening of "What is It?" and after seeing the film, I think that it has been mis-titled. "What is it?" is not quite descriptive enough. I think it should be called, "What in the Holy Fuck is Going on Here, People?" And no, that is not hyperbole.

I am cool with movies that are just a series of interesting images, or even conceptual pieces. I am OK with Bunuel, Jodorowski, and David Lynch. But I have had time to ruminate on this particular movie. And I am still left thinking, "What the fuck?"

The movie is a trip straight to Surrealville, population: the fish.

The film’s storyline, which moves between the main character’s real life and rich inner life, is kind of nebulous. One actor’s character in the credits is: The minstrel's concubine, mocking tormentor and ultimate outer sanctum. Scene after scene unfolds to assault the viewer with a variety of shock-value images, particularly a minstrel character in blackface, and a series of full-on snailicides, with one bubbling horror after another. 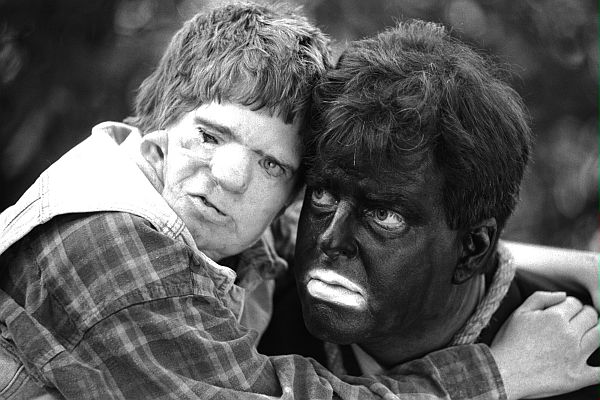 In the first truly disturbing scene, Crispin Glover looks uncomfortable as he puts on a record and states, "We are supposed to listen to this." It was funny at first, because Crispin Glover does a really good job of making looking awkward funny. Looking awkward may be his greatest talent. A song by Johnny Rebel starts playing and it is the most racist, offensive song I have ever heard. Then a girl in a monkey mask starts jacking off Stephen Stewart, who lies naked and wriggling in a clamshell. He does not appear to be hard, and the jacking off just goes on and on interminably. I was thinking, "Did they get this all in one take? Did they do this all day? That guy's dick must be so sore." It was disturbing because Stephen Stewart's palsied pink body looks so helpless and infantile. And that horrible, hateful song wails on and on. The scene was offensive on so many levels I almost walked out of a movie in outrage for the first time in my life. But there is a poem by Steven Jesse Bernstein in which he says, "When something disturbs me I like to think that it is important."

I realized that I should probably stay and explore why I was so upset. I could clearly see that Stewart had Cerebral Palsy. Cerebral Palsy does not affect a person's mental competence in any way. Once I thought about it, I was not quite as upset by the scene. He was consciously choosing to lie there naked and exposed. There is a difference between being demeaned and choosing to demean yourself. I'd certainly had no problem with Bob Flanagan doing all kinds of crazy shit like that.

One aspect of the movie that I had trouble justifying in any way was the blatant racism of the Johnny Rebel song and the minstrel. Apparently the minstrel was injecting himself with snail juice in order to transform himself into his idealized being - the snail. Maybe the minstrel symbolizes the main character's suppressed racism. Maybe by the minstrel wanting to become the snail, which kept getting destroyed, he was attempting to turn his own racism into something which could be destroyed. Maybe it was pure nihilism. Maybe it was the Freudian drive towards death. Or maybe not. Maybe he wanted to become the Nietzschian ubersnail. Maybe, or maybe not. Are you starting to get the idea?

Another controversial aspect of the movie is the use of several actors who have Down syndrome. There is clearly a need for more visibility in all forms of art for people with disabilities. But people who have developmental delays are a special case, because of the issue of informed consent. I do believe that people with developmental delays have a right to self-direction, and a right to be in any movie they like. But there is always the danger of exploitation. Out of a desire to please, or by misunderstanding the situation, they could be led into making choices that could harm them. The scene that raised the most concern for me was one in which the minstrel was being led into a cemetery with a noose around his neck. The observers in the cemetery are clearly distressed as they turn to each other in panic. It is not acting. It is genuine, heart-wrenching distress.

I stayed around after the movie for the Q and A to see if all of these issues would be addressed. Crispin Glover appeared onstage in an early 20th century style suit that made him look a little like a snake oil salesman or a circus barker. One of the first questions asked was, "How many snails were harmed during the filming of this movie?" He threw in a comment about it being legal to kill snails because they are considered a pest, but not to kill kittens. This offhand remark made me wonder if legalities were the only thing keeping this film being an all-out kitten bloodbath.

He also talked about how the mainstream film industry will not touch anything that is remotely taboo. The point of "What is It?" is to show things that the mainstream community would not show in order to illustrate the chasm between what could be shown and what is allowed to be shown. So the scenes are shocking just to be shocking, which I believe is the very definition of gratuitous.

There was a lot of talk about how brave Crispin Glover is to show this movie. But when I looked around the audience, the seats were filled with white, non-disabled hipster asses, just like his, just like mine. No one appeared to represent the disabled community. No one brought up the issue of racism. The room was filled with earnest young film students who wanted to discuss Godard. It was not exactly the hysterical mobs of Un Chien Andalou. Maybe it would be brave of Crispin Glover to take this movie on down to the Magic Johnson Theater on Martin Luther King and Crenshaw. Let that audience have a taste of Johnny Rebel and the minstrel and then we'd see just how edgy it is.

Crispin Glover does speak of the actors respectfully as individuals, which makes me feel slightly reassured that he was not using them in an exploitative manner. I had been concerned because other people have compared the movie to "Freaks". He explains that he sought out groups that use theater in a therapeutic manner for people with disabilities.

Some concern was raised regarding the actors being placed in inappropriate situations. His assertion that body doubles were used for graphic sex scenes closes that line of questioning right down. Well played. He definitely has an answer for everything. He sure is articulate. And that suit sure fits him well.

But what about the actors' ability to give informed consent to participate in questionable scenes? What about the scene in the graveyard that disturbed me so? Crispin Glover said that it was his favorite scene because it was so beautiful and genuine. He also mentions that several of the actors in that scene were not as high-functioning as some of the main characters. When the minstrel is being dragged along with a noose around his neck, the dismay evident on several actor's faces cannot be described as anything but alarming. Crispin Glover said he wanted to make a movie that makes you question whether or not it was wrong for him to make the movie, whether or not it was wrong for you to even be sitting there watching it. Here, in this moment, as the actors panicked in the cemetery, I believe he succeeded.

How therapeutic was it for those actors to be exposed to something so upsetting? There was no licensed therapist on the set to help them work through the feelings brought on by seeing what they believed was someone really being hurt. Who has the right or the responsibility to make the decision as to what they should and should not witness?

How beneficial was it for the actors to be exposed to an outdated symbol of hatred and humiliation that they could not fully fathom? They might have gone their entire lives never knowing that there was ever such a thing as blackface, never having an image in their heads of a "black" person with a noose around his neck.

What kind of words and imagery are those actors going to take back to their everyday lives when they are dropped back off at their group homes? How will they describe the experience of seeing a "black" man with a rope around his neck? Exploring taboos in cinema may be important and courageous in the privileged, protected world of overeducated white males. But on whose shoulders will responsibility fall when one of these actors gets their ass kicked for trying to describe this experience out in the real world?

Is it right for Crispin Glover to commit questionably moral acts in order to make the rest of us question what is and is not moral?