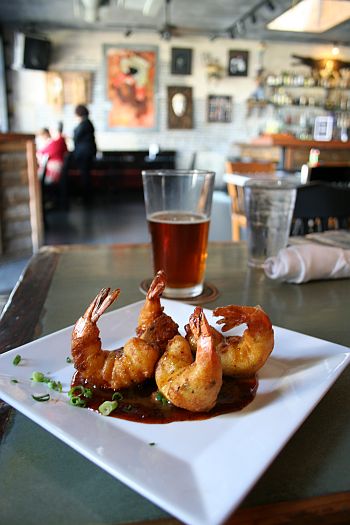 Cafe Boogaloo arrived on the scene in Hermosa Beach in 1995, around the same time I moved back to my hometown. It was the perfect place to meet up with old friends or to have a drink with first dates. The decor is upscale down-home and filled with one-of-a-kind folk art, somewhat similar to the House of Blues. Dim lighting, large westerly facing windows and lazily rotating ceiling fans keep the interior cool on warm days and crowded nights. The ambiant music is a good mix, with the likes of Muddy Waters and Professor Longhair. Cafe Boogaloo also has live music at night and a full bar.

Every time I went there in the mid-90s I always ordered the same thing - the very nouvelle Crawfish and Andouille Eggrolls. Fusion cuisine has brought forth some unholy Frankenstein creations, but every once in awhile one worked. I have always respected Cafe Boogaloo for making such a strange creation so cravable.

When I returned to my old haunt last weekend, I was saddened to discover that those egg rolls are no longer on the menu. But the experienced and affable server offered me the best alternative she could - a deep-fried shrimp appetizer which came with a similar dipping sauce. The dipping sauce was loosely based on a jezebel, made with chutney and quite a bit of cayenne. The tender shrimp were deep-fried in a hushpuppy batter that made them kind of like corndog-shrimp. It made me curious about trying them with a creole mustard-based sauce.

I wanted to compare similar menu items as much as possible in this series, so I made sure to order the Cafe's catfish appetizer. The cornmeal crust was tight and perfect, but unlike the fried shrimp, they were slightly greasy. The dipping sauce was a very good remoulade. 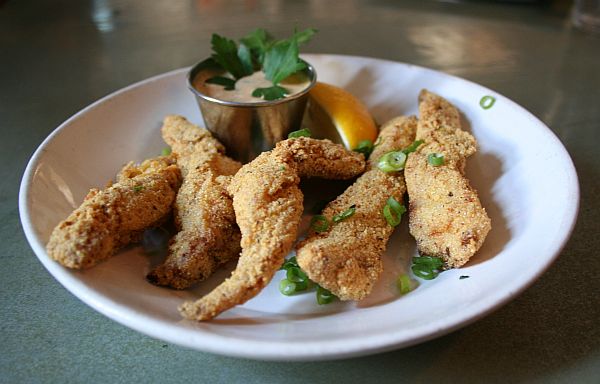 Really, it was impossible to make any real comparison to Mother's because it was a completely different sandwich. Comprised of the finest brisket, rather than the muck at the bottom of the pan, the sandwich rested on a dense, ciabatta-like bread, not french bread. Instead of lettuce, there was shredded cabbage. Instead of dill pickles there were bread-and-butter pickles. The pan drippings had soaked the bottom slice of bread, and some drippings were drizzled on the top. The drizzle on top confounded me, because my secret method for eating a debris sandwich is to turn it upside down so it won't disintigrate. With both slices of bread drizzled with pan juices, the sandwich broke in half down he middle. It was a damn fine sandwich that I would be pleased to be served anywhere, but it wasn't Mother's. The garlic french fries that accompanied the brazen sandwich were crispy and spectacular. 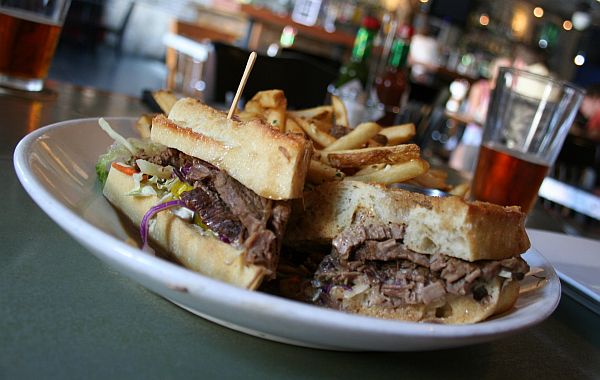 Finally, even though we were stuffed, we had to split a slice of key lime pie. I had never liked it before I tried Cafe Boogaloo's key lime pie eight years ago. It was so good that I asked for the recipe and I have been making that pie for New Year's Eve and other special occasions ever since. The pie was heavier than when I make it, and there were flecks of lime rind in the filling. I asked the server if the chef had changed. She told me that they had had a female chef who developed the menu and taught the three line cooks how to make everything. Then the chef moved on, but they still had the same three cooks. The owner oversees the menu himself now. She said he goes to the farmer's markets every week. He just loves food. She asked me if I was a chef and I told her no, I just love food too.

Later, as I was walking along the bar, I caught sight of some okra. I asked, "Is that pickled okra?" The bartender was quick to hand me a garnish pick with a trio of pickled vegetables and I went right for that okra. A guy who looked like a manlier version of Anderson Cooper commented, "You know where it's at." The pickled green bean I was eating was so hot, I choked and had a hard time responding. We started talking about how I pickle okra, and about favorite New Orleans restaurants and chefs. This was a man who loved food. But he seemed so young. I asked him if he was the owner, and sure enough he was. He introduced himself as Stephen. I chided him for taking the egg rolls off the menu and he said, "Funny you should mention that. I was wondering whether or not I should put them back on." I could have ordered a drink and sat there all night chewing the fat with him.

For me, a good menu is one that piques my interest. I can't wait to get back there and try Cafe Boogaloo's smoked duck and shiitake gumbo. Can they keep the shiitakes from getting chewy? Will they put the egg rolls back on the menu? Can their double-cut pork chop rival Emeril's? We will just have to stay tuned.

* When a roast cooks for a very long time, little bits of fat and meat remain in the bottom of the pan with the drippings. That is debris. Mother's in New Orleans is world-famous for their debris. Really, a sandwich that is just debris is pretty fatty and mushy. The thing to do at Mother's is to get a debris and roast beef sandwich, or better yet, a Ferdi, which is ham, roast beef and debris. I personally believe the Ferdi is in the top five of the pantheon of sandwiches.