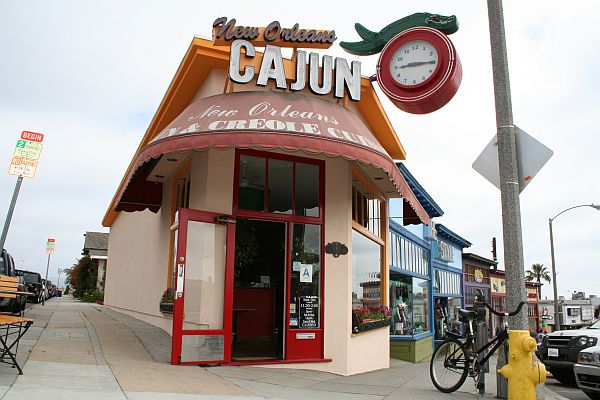 Just a block down from Ragin Cajun, New Orleans occupies a space that used to be a 50s cafe, and you can still see traces of that design. The interior is a long diner counter, with tables lining the wall. The restaurant is extremely dark inside, so it is a little unwelcoming at first. I have been there a few times, but never managed to actually sit down and eat before. My dining companions usually take one look at the menu, and they are out of there. It is sticker shock, pure and simple. A bowl of gumbo costs 25 dollars. As my nephew observed, "What kind of po' boy can afford to pay 17 dollars for a sandwich?" The last time I tried to eat there, I was dragged out so quickly that my mother left behind an ornament she had purchased at the local fair.

This time, my mom and I went back with a mission, ready to pay any price. In a fancy French restaurant, no one would even blink at 25 dollars for an entree. That's the going rate for cioppino, and it was a seafood gumbo after all. We sat by the front window, and a young man took our drink order. My mom asked about the abandoned ornament, and he rushed right back with it. They had kept it safe for her all that time. While we waited for our food, an older gentleman with a formal, vaguely British accent engaged us in conversation. He is from Jamaica, and he owns the restaurant with his wife, Casandra, who is a native New Orleanian. I told him, "I can't wait to try your gumbo. We've heard such great things about it." He looked me in the eye and said, "It is your opinion that matters to me." Swoon. 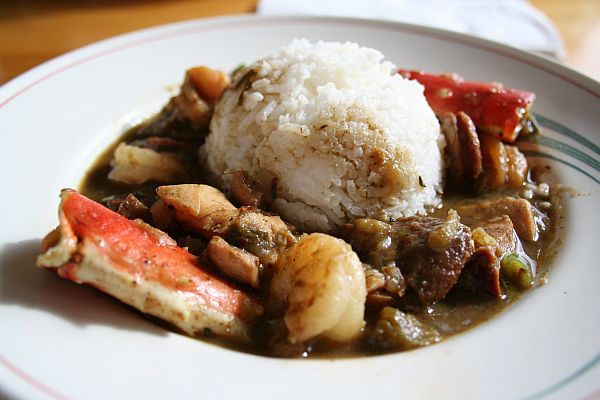 Besides the usual fare, their menu includes baby-back ribs, steaks and tri-tip. There are a variety of sausages, including the elusive boudin. They offer a low-calorie gumbo and a few vegetarian meals. They also serve fried turkey and display a characteristically New Orleanian tendency to stuff things with other things (e.g. chicken stuffed with crawfish). In addition to desserts, they also have Pralines (pronounced prah-leens, not prey-leens).

At 25 bucks, we decided to split the gumbo. It was the right decision, as the gumbo arrived in a bowl bigger than my head. Our individual serving bowls were also huge. There was enough for us both to have our fill and take home a third bowl for later. So really, a bowl of gumbo actually costs less than 10 dollars when split between three people. Like a fine chateaubriand, it is meant to be shared. The gumbo was generous with andouille, shrimp, crab, chicken and tasso (A Cajun smoked pork). The shrimp was gently cooked to perfection - none of the rubberiness you would expect from something that has been boiling in the pot all day. They keep it tender by waiting and adding the seafood to each order as it comes in. They used to use authentic blue crab, but noticed that the locals left it uneaten, so they replaced it with the more familiar king crab legs. The broth was dark, smoky, and multilayered, with different flavors developing as you savored each bite. One flavor was a slightly fishy element, but I appreciate that other people highly value that flavor. My husband describes it as "rich with the taste of the sea."

Some people at a nearby table were from New Orleans and wanted to speak to the chef, so Casandra came over to chat with them and they all exchanged hugs. I called her over and got my hug too. I was curious about the grilled alligator, because that is one tough hunk of meat. You usually have to deep-fry it or stew the hell out of it. She said she only serves the tail meat, which is more tender. She told me it arrives from Louisiana as a whole tail. I immediately started wondering what I could do to make her let me come and watch her butcher the next one. 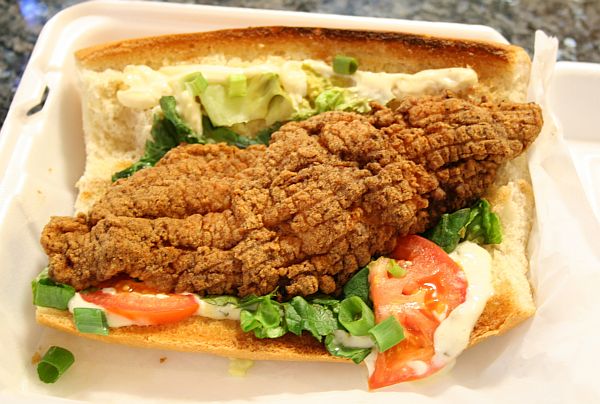 As long as we were there, I also ordered a fried catfish po'boy, alligator sausage po'boy (not made in-house, but also flown in), red beans, greens, and an order of peach cobbler to go. I ate the catfish po'boy cold later that night after staying out late. I noticed that even though they had sourdough bread on the table, they had used the traditional French bread for the sandwiches. The coating was thick, like fried chicken, and the fish was so meaty and lacking in any fishiness that I had to double-check to make sure it wasn't actually chicken. The alligator sausage seemed to have the crackle of a natural casing, and was interesting and spicy, but not really better than any other sausage. The red beans and rice tasted exactly like mine, so of course I loved them. I am especially finicky with greens. Just as I am overly-sensitive to fishiness, I am overly-sensitive to bitterness. These greens were a bit spicier than I am used to, but the balance of heat, tanginess and sweetness perfectly mellowed out the bitterness. I think they might possibly win the title of the best greens in Los Angeles. The cobbler was stuffed with caramelized apples and topped with a flaky lattice crust. It was a bit sweet, as soul food desserts tend to be. It was just right.

While we were waiting for the to-go order in the restaurant, I clumsily broke something. I felt like such an idiot. I wandered over to Casandra, put a hand on her shoulder and leaned in to whisper in her ear. Before I could start talking, she turned her head and kissed me on the forehead! She thought I was coming for some love and she was willing to oblige me with a motherly cuddle. I was touched beyond words. I whispered my transgression to her, and she told me not to worry about it. I felt so bad. As I was leaving, I made that helpless teeth-baring grimace that you make when you feel like a buffoon. She waved me away with a dishtowel and reassured me, "I got you." The subtle difference between "I got you" and "I got it" was not lost on me. And she does have me. For life. 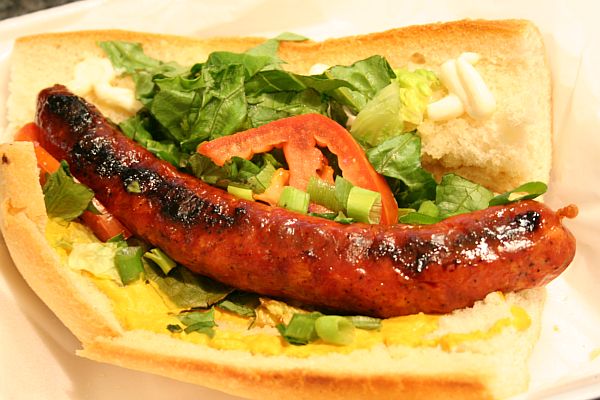