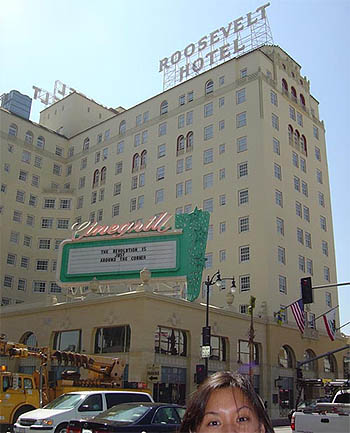 Just like we speculated almost a month ago, Prince's people today announced that the purple one will indeed perform for seven special nights at the Hotel Roosevelt in Hollywood for the low, low price of $3,121 for two tickets.

What do you get for your money, Los Angeles?

At 7:30pm you will be treated to a fancy VIP dinner at the Hollywood Roosevelt Hotel's Dakota Restaurant. At 9:30pm the tiny club at the Roosevelt begins to play music from a dj, at 11pm Prince begins to play in the Blossom Room. Then at 1am prepare to groove to an "after-hours free form jazz jam" led by Prince himself.

If you don't have three grand in your pocket, there are 70 "standing room only" tickets available which don't include dinner, but will only run you $312.10 each.

The fun starts this Saturday, June 23rd with other confirmed dates being June 24, June 28th, June 29th, and June 30th, with two more dates to be named later.

And if U need someone to take, LAist is right here 4 U, baby.

photo by Sandy Chiu during spring break '06, used with permission