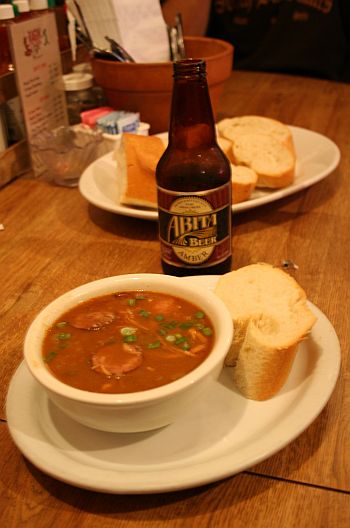 Hermosa Beach is one lucky town.

Not only do they have the beautiful beach and the ocean breezes, but they have lucked out in the restaurant department. They are home to not one, but three New Orleans-inspired eateries: Ragin Cajun, New Orleans, and Café Boogaloo are all within two blocks of each other. This week, to gear up for the big Bayou Festival in Long Beach, I am going to cover all three restaurants.

First, let’s start off with Ragin Cajun. It has long been one of our go-to lunch spots. If this place were in New Orleans, I would guess it would be located on Bourbon Street. The riotous décor makes it look like a Mardi Gras float threw up on the walls. But the wooden tables, Mason jar glasses and huge selection of hot sauce on every table make it comfy and homey in spite of the profusion of green, purple and gold everywhere. The cartoonish tourist trap environment actually makes this a perfect place to take kids, large groups and old people. It is a brightly-lit, happy kind of place.

Founder, owner, and chef, Stephen Domingue, is a true Cajun from Lafayette, right in the heart of Cajun country*. He has a number of fans in the on-line foodie forums, and Ragin Cajun is held in high regard. 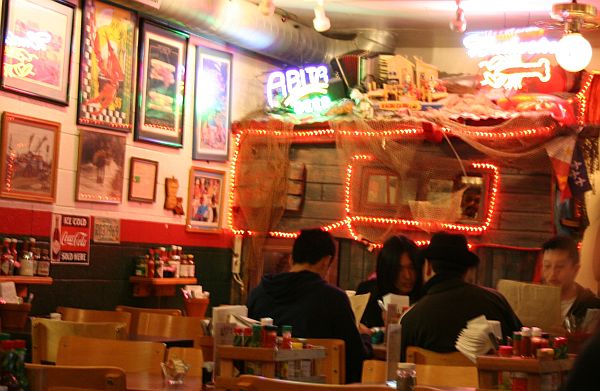 The menu, printed on the side of a brown paper grocery store bag, is pretty simple: fried seafood, red beans, jambalaya, gumbo, all the usual suspects. Their one twist is “Gumbolaya” which is basically gumbo served over jambalaya. The straightforward menu is another reason that kids and older people are always happy when I take them there. There are plenty of unchallenging options, like the ham po’boy, for the faint of heart. The main reason I return again and again to the Ragin Cajun is their deftness at real, southern deep-frying. The catfish "fingers" have a traditional cornmeal coating with a nice, tight seal, and not a hit of greasiness. They are the best catfish "fingers" I have had outside of New Orleans. The fried alligator is similar, but naturally tougher. I’ve noticed for some reason kids are afraid of the catfish – even my friend’s son who happily devours the alligator. But once they try it, they are converts. When I finally convinced my 80-year-old uncle who was visiting from Canada to try the strange and exotic catfish, he ended up eating most of my dinner. The remoulade dipping sauce is first-rate as well. Nothing else on the menu matters to me. Really, give me properly-fried catfish and an Abita Amber and I am good to go. 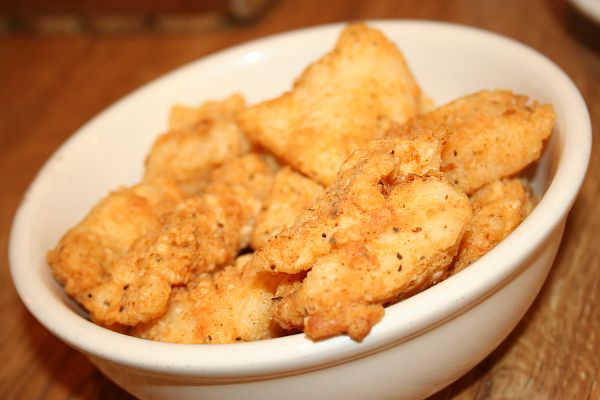 Other than the fried seafood, I don’t get very excited about their menu. I’ve never been a big fan of jambalaya or etouffee. I compare everything else on the menu to my own cooking, and the gumbo and red beans just don’t compare. My husband calls their gumbo “sausage soup”, and I find that other than a nice, complex roux, the dominant flavor is hot sauce. Or as Ralph on the Simpsons says, “It tastes like burning.” The red beans are creamy and rich enough, but I find them kind of bland. One of my friends swears by them though, so I guess it is a matter of taste.

The servers are mostly cute, perky college girls. They are very friendly and helpful. The owner, Stephen Domingue is a big, personable guy who can be kind of intense. Once he stopped by my table to coo over my niece, but when I tried talking to him he acted like I was bothering him. On another occasion, he hollered across the restaurant at a waitress, nagging her not to forget some chore. She was taking an order at the time, so she looked over and nodded. He hollered, “Did you HEAR me?” She replied, “Yes, the whole restaurant heard you.” Oh, so HE’S the ragin Cajun. 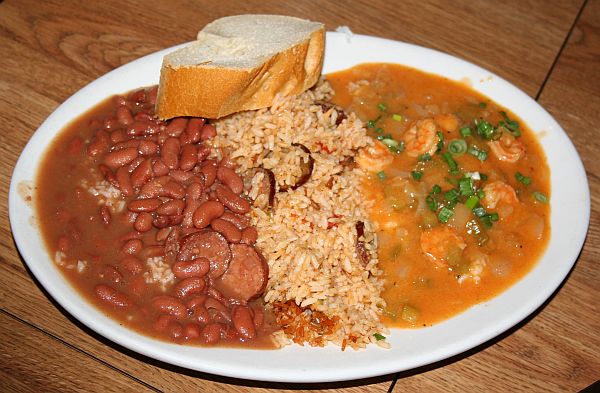 * New Orleans is not really considered part of Cajun country, and most of the citified food developed there is considered “creole”. But there has been much overlap between these two cuisines, especially since Paul Prudhomme and Emeril Lagassi started “haute-ifying” Cajun food. I understand Cajuns defending their culture and tradition, but any foodie who wants to get into Cajun vs. Creole with you on a particular dish is just spoiling for a fight. The other thing people like to fight over is “blackening”, which was basically invented by Paul Prudhomme. Many people insist it is not “real Cajun”. But most Cajun restaurants are happy to serve it. Food is like language, constantly changing and growing. (How big of a dork am I that I footnoted a blog?)