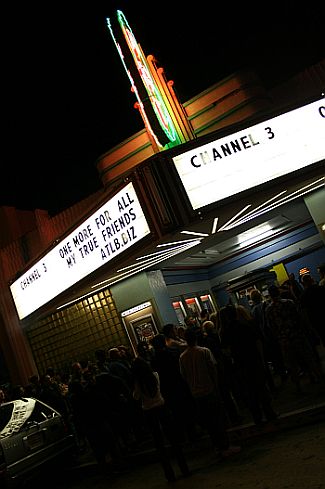 Saturday night the Long Beach Art Theater was host to the premiere of the documentary, "One More for All my True Friends", the story of Orange County punk band Channel 3. The film was produced by Erik Carreon of Homeschool Productions.

Channel 3 opened the bill at the very first gig I ever attended. Perennial openers, Channel 3's logo is prominent on many classic flyers. Other than that, there is not much that was really memorable about them. I should note here that the hardcore punk scene was heavily split across geographical lines. Whereas there weren’t formal “turf wars”, and there were few real gangs, everyone tended to keep to their locals. I was a “South Bay” punk. The bands I followed, and most my friends, came from Santa Monica to the North, down to Pedro, centering around SST records. Orange County and Oxnard were the most clannish of all of the groups, banding together around a weird kind of civic pride. So Channel 3 were not “my people”. I had seen them open a few shows, but I had never met them. When I asked friends about them after hearing about this movie, everyone had the same comment, “I don’t know about the music, but Kimm was always a really nice guy.” Not one person said anything positive about the band itself. So I went to the free screening/premier of “One More for all my True Friends” expecting to witness a train wreck. I brought along a fellow South Bay SST veteran to get a second opinion, and because she is especially fond of train wrecks.

To my surprise, there was a line around the block. The punk scene is alive and thriving in the OC. Channel 3 has a faithful following, and it was a little bit like attending someone else’s high school reunion. I had a nice chat with the filmmaker, Erik, over popcorn in the lobby. I asked him where he got the footage and he said, “Kimm is a real pack rat. He kept everything.” Now, I know Kimm could not have been filming while he was playing, so it did not bode well for classic live performances in the film. But Erik was cool, and the crowd was psyched in spite of having to wait in line outside for an hour past the movie’s scheduled start time. Maybe I was wrong about their second banana status. So I had high hopes going into the film.

The film-maker had stressed that this was more of a movie about youth and friendship, not a punk rock documentary, and it started out promisingly with some interesting historical background about the city of Cerritos. It talks about core bandmembers Mike Magrann and Kimm Gardener's high school years, and everyone laughs at the cheesy 70s fashions. It is pretty clear that these guys were not disaffected members of a fringe group like most punks I knew. They were the popular kids. They were college-bound. There isn't any apparent rejection of society, rebellion, or any recognizable political agenda. The impression given by the movie is that Channel 3's sole objective was getting signed to a big label. Most punk bands felt that signing with major labels was selling out. Channel 3 seemed like they could not sell out fast enough.

Maybe I am being a little hypocritical, since the Ginn family did bankroll SST's start-up, and Milo did go to college. But DCH (Descendents Central Headquarters) was a trashy office space in Lomita, and everyone slept on the floor of the same shitty room where they practiced. The people who worked at SST slept at SST. Black Flag was not living in the scummy basement of "The Church" to be cool. Almost everyone I knew who was middle-class had been kicked out by their parents or had run away from an untenable situation. And the Hollywood punks? Forget it. Squats, heroin and petty crime were typical. Channel 3 was practically living on another planet. Their lifestyle was comfortable, to say the least. When Kimm graduates high school, and his parents move away, leaving him on his own with a nice house and blank checkbook, it is just a bit much. It looks to me like a bunch of rich kids slumming.

I have been indoctrinated into San Pedro-ite Mike Watt's "econo" ethos. Consume little. Travel light. Get by on the minimum. When Channel 3 starts talking about touring, they were staying in hotel rooms. Hotel rooms? They weren't sleeping in a van? Finally they say, "We had to sneak out in the morning sometimes." and I thought, "Oh. They couldn't afford hotels. That makes more sense. They were skipping out on the bill". No, it wasn't about the money. They were sneaking out because they had set the mattress on fire and shit in a drawer. Mike Magrann says, "Things got hard on the road sometimes. Sometimes we had to suck it up and call back home and ask mom and dad to wire us another 75 bucks." and he says this like it is truly hitting bottom. Every time Mike said some kind of overprivileged crap like this, which was the polar opposite of the SST musical experience, my friend and I would poke each other in the leg. By the midpoint of the movie, my thigh was getting pretty bruised. I'm sorry, I don't know that I would not behave the exact same way if I were a rich kid musician, but it is kind of grating. It is like watching "My Super Sweet 16" doing a punk rock theme party.

Affluance aside, and my personal opinions about its affect on their punk rock cred aside, this movie starts out well. It is fun reminiscing about that era. And I was reminded that Channel 3 did the song, "Manzanar", which importantly educated an entire generation of local kids about Japanese internment camps. But after the first hour or so, this film becomes completely unbearable. The bulk of the movie is a talking head interview of Mike and Kimm, Mike and Kimm, Mike and Kimm, but mostly Mike. It's like being stuck on a bus next to him all the way to Bakersfield. Maybe that's why they go through rhythm sections faster than Chuck Berry. Almost all of the band footage is of a single show, videotaped just for this movie. Thank God for Target Video, or they wouldn't have any live footage at all from their glory days. And what they have from Target is scant and in lousy condition. At one point you can see the video tracking. Of course, Channel 3's music, other than occasionally making me want to slam dance, is not anything I am really missing more of. I don't really care to see any more live footage. Channel 3's songs drone on relentlessly in the background as Mike talks and talks and talks. It was making ME want to quit the band

Then the band hits the point in the story where they are "taking the band in a new direction" in the late 80s. This new direction involves turning into an overproduced, coke-sniffing, Bam Magazine-style Sunset strip hair band. We can't take it anymore. As Mike prattles on, trying to rationalize the hair band era as anything but a full-on sell-out, it was time for us to hit the road. As my friend put it, "Unless this somehow culminates in a fiery crash that kills them all, I really don't need to stay for the ending."