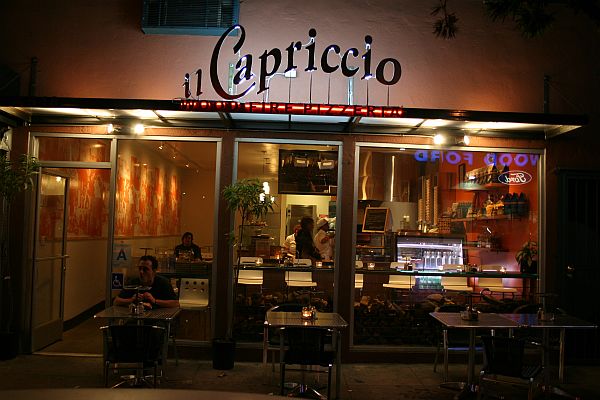 Last March, one of my favorite Los Feliz restaurants, il Capriccio, opened up a pizzeria. It’s located at the Sunset Junction, on Hollywood Boulevard next to the U-Haul, or a block up from the strip joint, depending on your frame of reference.

When people talk about California pizza, they usually mean gourmet toppings, a la Wolfgang Puck, with a sweet, bready crust like California Pizza Kitchen's. While I am a fan of adventurous toppings, I hate that sweet crust. So I was pleased to discover that il Capriccio pairs a more traditional Napoli-style crust, like Tony’s Bellavista and Fiorello’s with a dazzling array of exciting toppings. I think the crust is their strong point and the one thing that makes il Capriccio a real contender. They might even be a heavyweight contender once they refine things a little. 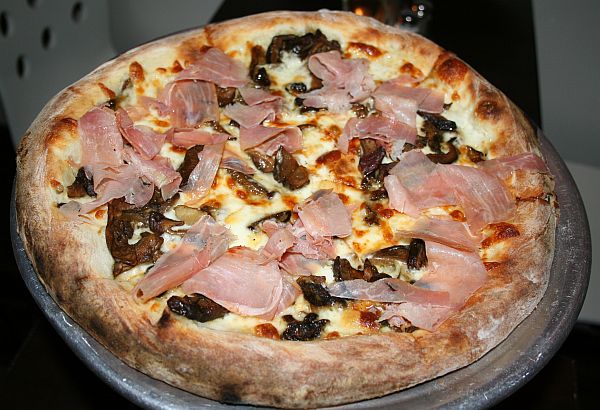 I arrived at the narrow, cafe-style pizzeria around 10:30pm on a Saturday night and noticed the hours posted on the door said they close at 11pm. The counterperson was very welcoming, so we decided to eat in in spite of the late hour. The entire time we were eating they were tearing the open kitchen apart, cleaning it like they were preparing for inspection by a drill sergeant. There was a definite bum’s rush vibe, but I was really impressed by how thorough they were being, and there was no smell of cleanser to ruin the meal. I was also enjoying eavesdropping on a nearby conversation, where some guy was passionately describing the food he had eaten at a recent restaurant event. He first captured my attention by throwing around the word, brus-Ke-tta, which was making me laugh because of our recent discussion of the topic here at Laist. It is always fun to listen to someone who really knows their food tearing it up, so it was almost like a floor show. Later he introduced himself to me as Ermanno, and unsurprisingly, he turned out to be the owner.

I ordered both the goat cheese pizza and the prosciutto and shiitake pizza. I was a little unsure about shiitakes as a topping because there is such a fine line between their perfect moment of doneness, and a second later when they are overcooked. But, I thought, it would be a good barometer. If you are brave enough to try to cook prosciutto and shiitake together in a wood-fired oven, let’s see what you’ve got. They were savvy enough to not put tomato sauce on that pizza, so maybe it could work. Unfortunately, my instincts were correct. The shiitakes were chewy and flavorless. But the crust was so fantastic I didn’t really care too much about the toppings. You know how sometimes you sit down in a new restaurant, and with your first bite of bread, you think, “Wow. This place is going to be good.” That is what I thought of when I bit into the crust at il Capriccio. Like perfectly risen french bread, the exterior is crusty while the interior is soft and yielding. The center of the tomato-sauced goat cheese was a little droopy, and one edge was slightly charred, but otherwise the crust might be the best I have ever had.

il Capriccio’s tomato sauce and cheese were perfectly balanced, if not particularly memorable. It is hard to remember anything compared to that amazing crust. The formula for greatness is there; I think the cooks just need to get used to the capriciousness of a wood oven.