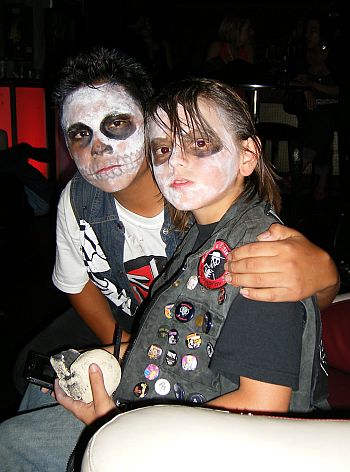 Last night we went to the Knitting Factory’s punk rock cover band night. Going to all-ages shows with little modern punks always trips me out. I don’t mean Green Day punks or whatever the hell they are calling punk this week. I mean kids who put on a costume of what we were wearing back in 1981. They mix it up with some new wave and metal crap that would have branded them a poseur way back when, but they are basically 1980s punk revivalists. They listen to the 70s and 80s punk bands and slam dance. It’s like having a bunch of little mini-me’s running around. There was a news report on punk rock back in 1983 that edited together slam dancing footage with Paul Lynde singing “Kids” from Bye Bye Birdie. It was genius editing. I kept hearing that song in my head all night.

We arrived in time to catch the end of the Clash City Rockers. The guitar and bass player were on target, but the drums were kind of weak and the singer just didn’t have the heart. I mean, if you aren’t living in London in the 70s when everyone was on the dole, how can you really sell it? The band played White Riot way too slow. It ruined the song. When the singer intoned, “…I want a riot…white riot…I want a riot of my own” I just did not believe that he really wanted a riot. He wanted a Mercedes. That I could believe. There just doesn't seem to be any point to having a cover band without any kind of a twist or a gimmick to make it fresh. 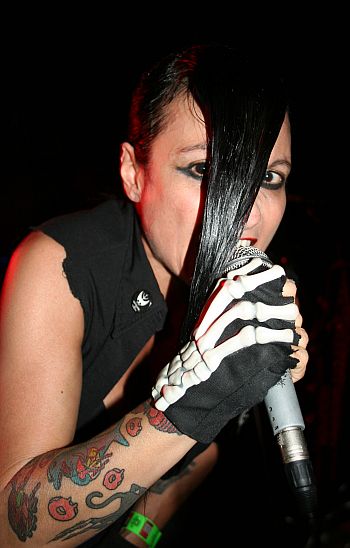 Now the Bitchfits for example, are primarily a girl band. That's their hook. When the Bitchfits went on, everybody paid attention. My husband and friend are both from Jersey and know the original Misfits, so they were especially curious. The lead singer kept berating the audience, “What am I, a fucking jukebox? You can’t push a button and make me play a song!” I asked my friend, “Did the Misfits used to talk to audiences like that?” She said, “I think she assumes everyone from Jersey talks like the Sopranos.” Or maybe that was the "bitch" part of the name. Musically, the band took a few songs to find their groove, but once they got into it, they were pretty good, and on the harder thrash songs they were rad. The singer, “Gwen Standzbig” would also do very well in a Runaways cover band.

I had come to see the next band, Black Fag. Even a few ex-members of Black Flag, think they’re hysterical. But I’m not a gay man, so I can’t really speak to what is and isn’t crossing the line of political correctness. I don’t believe in “outing” people, so I guess I also don’t believe in “in-ing” people. The band’s sexual identities are their own business. But I did have a long talk with lead singer, Liberace Morris, the founder, about the issues surrounding a band called Black Fag that plays on gay stereotypes. He said the point is to entertain, that it’s obviously a goof. And one thing punk rock does is bring up social issues. I told him, it also has a history of using irony and parody – FEAR did not really want to have a war. Anarchy Six did not actually want you to kill your mom.

Then Liberace said lots of really intelligent things about how maybe what they’re doing is right, and maybe it's wrong, but that they think it’s important to address the issue and start the discussion. Like, if you are uncomfortable, maybe you should explore why it makes you uncomfortable. This is almost word-for-word how Adam Parfrey and Crispin Glover defended their controversial - OK, let’s say it, totally offensive movie, “What is It?” to me. Word for word.

But I understood what he was saying, and felt like it was coming from a good place. He felt the dialogue was important because punk rock has a history of homophobia. I told him, actually, in the beginning, punk rock was mainly for disenfranchised artistic types and gay people. Problems only came later when disenfranchised working-class teens and suburban kids (who would probably do just fine on Prozac nowadays) got involved in order to let out their anger in a more physical way. So it was a much more interesting discussion than I usually get into at gigs.

Liberace traipsed off to get ready for his show, and I headed back towards the pit. There was a huge area for a slam pit in the center. But there were actually only 5 to 10 kids slamming at any one time. The thing is, some of them had personal vendettas. Certain guys were out to fuck each other up. And to fuck up any bystanders if they could get them. It used to be, if you were right next to the pit, you held your hands out and guided or pushed strays back into the pit. Sometimes the whole pit would move, pushing people up against the stage, but for the most part the craziness was kept within the pit. And little kids and girls were usually blocked and protected. Not with these guys. I was trying to block a 8-year old kid from the fracas, and I got PUNCHED. With a closed fist. TWICE.

These guys are literally punching eachother: 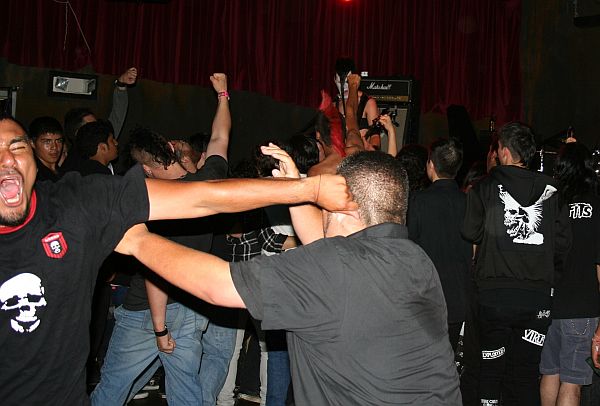 After awhile, one of them seems to be down for the count: 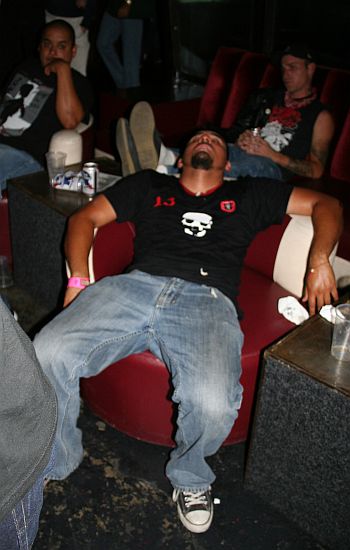 But it only takes one flash from my camera and he is up and ready to PARTAY! Ahhhh, youth. 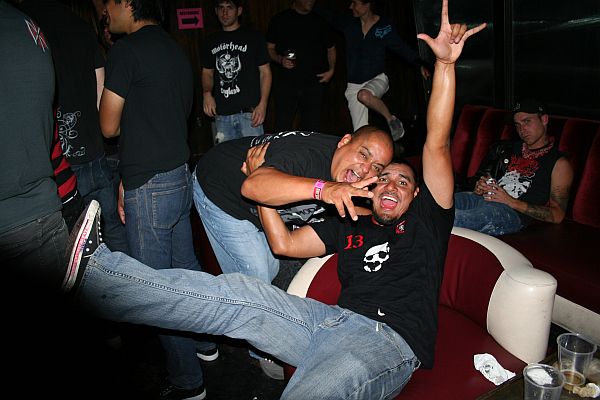 Black Fag was on, so finally I climbed up on the stage to get away from all the punching. There was still a lot of pushing and I had to keep one eye on the pit at all times. One year at Mardi Gras I discovered that if you are holding a camera up to your face, and you get knocked into, your camera will smash you in the face. It really, really hurts and breaks your lens. 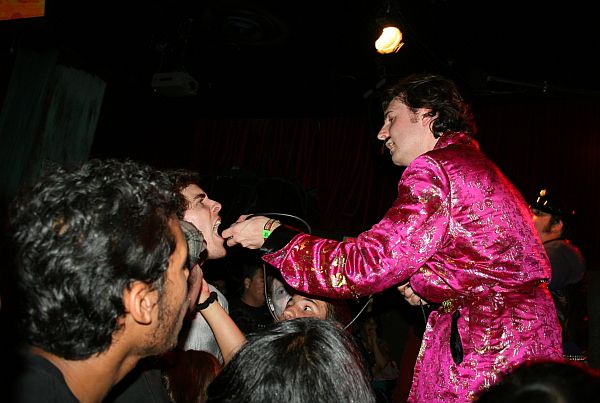 The first few songs of Black Fag made me a little uncomfortable. It was such a stereotype. But as the familiarity of the songs worked their magic on me, and the funny lyrics lightened the mood, Liberace also seemed to take the mincing down a notch. They are a good-time fun band. Cher Dykeowski is really cute and the singer from the Bitchfits couldn’t resist running up onstage to simulate sex acts with her. The two back-up singers, sidemen, flag team, what-have-you were adorable bears. I have to say, the musicianship is first-rate and Liberace can work a crowd like nobody’s business. They are hilarious. 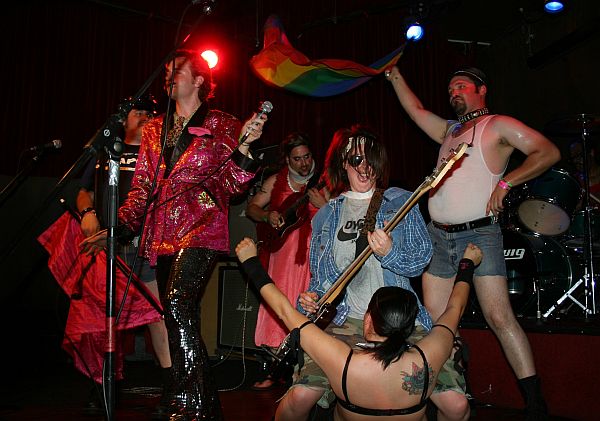 Well, I feel like an old-timer now, so it is time for me to pass on my knowledge to the next generation, so here is a little tutorial on slam-dancing:

And for the girl I met in the bathroom, I hope you read this. You don’t have to put up with that kind of shit. Call LACAAW (Peace Over Violence) right now.