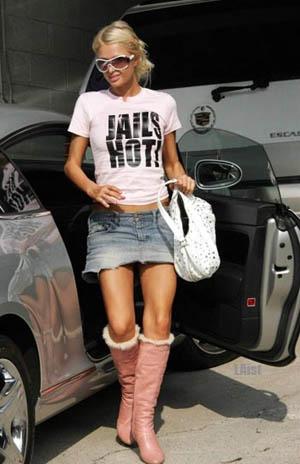 Sheriff Lee Baca promised that professional party girl Paris Hilton would be treated just like any one else, but lo and behold, just days after she walked into the big hose, she slinked out in the middle of the night after complaining.

The Associated Press is saying that she was released for an "unspecified medical problem" but TMZ is reporting that she was let free because jail wasn't agreeing with her nerves.

Law enforcement sources tell TMZ Paris Hilton's medical condition was purely psychological and that she was in peril of having a nervous breakdown, and that's why she was released early this morning.

Psychiatrist Charles Sophy visited Hilton in jail yesterday and the day before. We're told after Sophy's visit yesterday, word was passed to the Sheriff that Hilton's mental state was fragile and she was at risk.

The reason for releasing her had nothing to do with a rash or other physical issues. It was purely in her head.

Last month, on the eve of a trial in which Hilton was accused of slandering socialite Zeta Graph, Dr. Sophy told the judge that Hilton was "emotionally distraught and traumatized" over her jail sentence, which prevented her from participating in a meaningful defense. That trial was put on hold until August. - TMZ

So once again Paris has taught us a lesson: if you endanger the lives of Los Angelenos by driving drunk and then driving repeatedly with a suspended license, the way to avoid a long short sentence, just start freaking out and crying and act like you're having a nervous breakdown AND THE SHERIFF OF LA WILL LET YOU GO HOME TO EAT CUPCAKES.

And then you will get to go back to your plush crib and chill with your ankle bracelet, which will be adorned with diamonds, no doubt.

Pissed? Join the club. The president of the Association of Los Angeles Deputy Sheriffs is calling bullshit and saying that the jail Hilton was at has a huge medical facility to handle issues like whatever Paris has, and that the order to release her probably came from Sheriff Baca himself. "There appears to have been preferential treatment," ALADS president Steve Remige told TMZ.