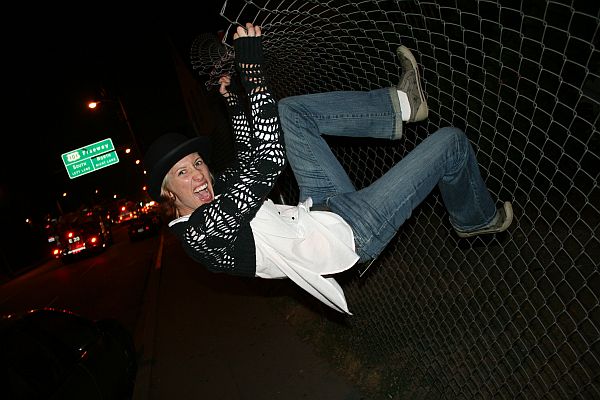 Put on your comfortable shoes, girls, because there will be not one, but TWO Dyke Marches this weekend. Friday night Christopher Street West's LA Pride will be sponsoring the "traditional" WeHo Dyke March, which has been an annual event since around 1994.

However, original founders of the WeHo Dyke March, former members of Act Up! including Cindy Crogan and Judy Sisneros, splintered off in 2003 to form Dyke March Los Angeles. They felt the march was getting lost amongst all of the other activities of LA Pride in "Boy's Town", and wanted to promote lesbian visibility. Dyke March Los Angeles will be happening in Silverlake (aka Girlztown) on Saturday night.

(Event info after the jump) 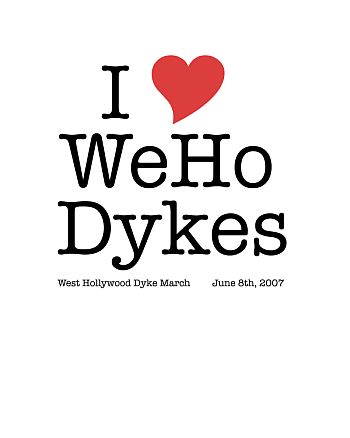 "The Dyke March Rally will commence at 7:30PM on San Vicente Blvd. just south of Santa Monica Blvd., featuring honorary speakers that represent the West Hollywood community. Following the rally, the March will proceed east down Santa Monica Blvd., led by the traditional women and motorcycles. The route will return to the Christopher Street West PRIDE festival grounds and jumpstart the After Party, located at the main stage in the baseball diamond in West Hollywood Park. The After Party will include special guest performances and emcees that are not to be missed!

The Lesbian Visibility Committee is a sub-committee of the Lesbian and Gay Advisory Board.

For More Information please call the City Of West Hollywood at (323) 848-6510 or TTY for the hearing impaired (323) 858-6496. Or visit our website at lapride.org, www.weholvc.com and www.myspace.com/wehodykemarch."
-from the Los Angeles Pride website 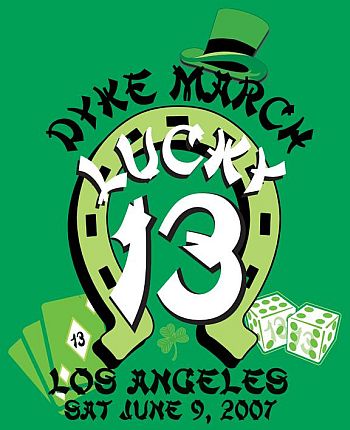 "Your official DYKE March-Los Angeles, since 1994 Sat. June 9th, 2007 To commemorate the 13th Annual March for "Lesbian Visibility" Dyke March-Los Angeles. This year’s theme is Lucky 13! So join us as we take the streets of Silver Lake/Girlztown 7:00pm: We gather at The Vista Theater (4473 Sunset, Dr., Los Angeles 90027) Calling ALL to join: DYKES on Bikes, DYKES on Bicycles, marchers bring your megaphones, horns, drums (or pots & pans) whistles, any and ALL noise maker you can find. The DYKE March-Los Angeles begins at 7:30pm: We will take the streets of Silver Lake Marching eastbound on Sunset, southbound on Santa Monica Blvd., 8:00pm: Our Post-Party Celebrations begins The L.A. Eagle (4219 Santa Monica Blvd., LA 90029 at Hoover) Mistress of Ceremonies to groove you through the night 'Xochitl Brown'.”
- From the Dyke March LA Myspace page
(Entertainment to include Dire Straights-Drag Kings, Miracle Whips-Burlesque, OFF RAMP-Burlesque, and We Float-Band Spinning DJ DyNoMite LoLa, DJ Hedo, and more...)
www.dykemarchla.com
http://www.myspace.com/dykemarchla