Does This Logo Look Like Lisa Simpson on her Knees? 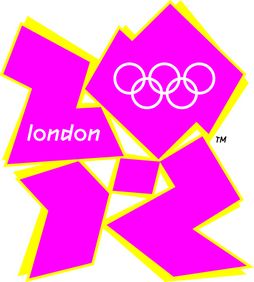 Why hast thou forsaken us?

We realize that you hate us for our freedoms and for our superior dental hygiene.

But why would you take the innocence and intellect of Lisa Simpson and do that for her just so that you could sell a few more million 2012 Olympic t-shirts?

We could have sworn that they have The Simpsons across the pond, was there nobody in the room who snickered when this new logo was revealed today?

Is there no one on that island with their head in the gutter?

We're told that you spent over $750k and a year to develop this logo and just now you're saying D'oh?

Hell, the very first comment on Londonist acknowledged that yep that's Lil Lisa doing something that doesn't seem like something a vegetarian would do unless she's planning on spitting it out.

Is this just some brilliant underground viral marketing for the upcoming Simpson's movie?

Was this all a genius way to get the BBC to put a goatse version of the logo on their air?

Or did you do this so we in LA would feel ok about losing the Olympic bid to Chicago where they will have the opportunity, perhaps, to get embarrassed like you are experiencing today.

Or do you plan on keeping a stiff upper lip and playing on with this logo? Something that's pink, and foul, and to be seen by kids around the world. Something, that if you keep, will end up being the most popular logo ever.