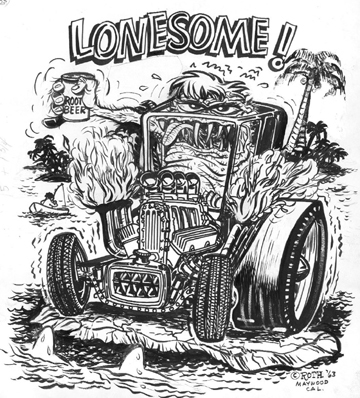 Are you old enough to be nostalgic for "Car Toons" comics? Or young enough to wonder what the deal is with Rat Fink? Tonight's art opening for original Big Daddy Roth artwork at La Luz De Jesus is a can't miss event for children of all ages. Big Daddy Roth's characters fathered a movement Howie Pyro refers to as lowbrow/pop surrealism. Roth mentored and inspired artists such as Robert Williams and Ed Newton, not to mention an entire generation of unnamed PeeChee folder doodlers.

"Ed “Big Daddy” Roth did what he did best. He followed his heart & became a pied piper to loads of weird kids in the 60's that turned into weird adults in the 80's & 90's. Roth created "weirdo" characters for fun. People loved these drawings so Roth painted 'em on t-shirts. He became a grease-monkey Andy Warhol, employing incredible artists like Ed Newton & Robert Williams to do his art for him, which he signed and mass produced. Like Warhol, he fathered an art movement; lowbrow/pop-surrealism, quite similar in many ways to the pop-art movement. In recent years Roth has become the Warhol of a new generation, tuned in by his star pupil, Robert Williams. Roth, no longer in the underground, (though he is sadly located there now) is a rock star in his own right. See these unbelievably rare lowbrow pop art hieroglyphics in person, as you will probably never see the original artwork for these disposable masterpieces ever again.”

- Howie Pyro, from the website of La Luz De Jesus