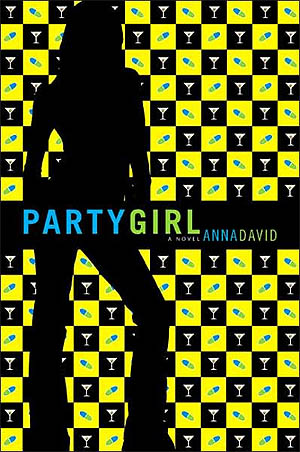 Ever since I went on vacation in March and found myself flying through four books in four days, I've realized how much I miss actually sitting down and reading real books. Not magazines, not updates on my RSS feed, but a real book. In that regard, I've been fairly indiscriminating in making every effort to cross the gamut from classic to bestseller to inspirational. But even better, I've found the first great beach read of the summer. Being released today, Party Girl by Anna David is the perfect hooked-for-three-days and pass it on kind of book. In fact, I've had a hard time getting it back to even write a review. Both my roommates read it and it is now on my second girlfriend(please subtract 5 from book sales). What can I say, I like to share the love.

Party Girl is Sex and The City meets Starting Over. Based on Anna's own experiences as an up and coming writer in the LA entertainment scene, Anna has taken her experiences and managed to channel them into a funny, witty and introspective book. Her heroine is "Amelia Stone," a self-destructive staff member for a celebrity weekly magainze called Absolutely Fabulous. Amelia is into the Hollywood sex, drugs and rock 'n roll scene and her best relationship is with "Alex," her code word for coke. Her trials and tribulations get her fired and into rehad where she discovers more about herself then she ever knew. Once out of rehab will she make it clean and sober? The twist of fate is she is approached to write a column for a magazine called "Party Girl" all about these sordid tales right when she gets out and typical LA, most people thought she was on vacation and no one really knows she was actually in rehab. How she balances her new lifestyle with the best paying gig she's ever had is how the rest of the story unfolds.

Certainly laden with celebrity references and famous landmarks this books reminds me of the shoes that say Kitson on them. Here in LA, no one would wear them, but the rest of the country is so fascinated by our fancy, sunny lifestyle that they sell like hotcakes. Party Girl is like that. You'll know her references, though with subtle names changes, and *gasp* is she secretly talking about Matt Dillon? But everywhere else, they won't know what she means. We get to be in on David's little secrets and it feels dirty but pretty damn cool.

Anna David is everywhere these days. She had a story published in my favorite column in the Sunday New York Times, Modern Love and also hosts a weekly chat on G4's Attack of the Show. She also has a blog and a grog. Yup, she's a writer!

Want to meet Anna yourself? She has a book signing coming up at Book Soup on June 8th at 7pm.