Alcove - On the Rebound

While I was deciding whether or not to break things off with Aroma, I thought I might go check out their sister restaurant, Alcove. It was only in Los Feliz. I mean, it was right there on the way to Wacko. It would almost be rude not to stop. I had my nephew along for the ride too, so it wasn't like a date or anything. I mean, I'm still getting over Aroma. No need to rush into anything.

Such a beautiful patio! Such a garden! If only my vines would climb like that, if only my trees gnarled with such character. This is the house my grandmother would have lived in. Not my real grandmother, who had a lovely little duplex in Penticton BC, but my imaginary grandmother – the one who didn’t make blueberry muffins by mixing tap water into some blue-specked powder from a cardboard box. Although I have to admit, my grandmother did dye her hair an insanely bright orange right into her 80s, so I wasn’t exactly gypped in the grandmother department. In fact, her David Lynchian looks and matching orange lipstick might have fit in quite nicely with this neighborhood. But I digress.

The thing about these restaurants is that they are just so beautiful. They make you want to cozy into an old wooden chair under a leafy bough, or sink into a deep velvet end chair inside and start writing that great American novel. It even seems plausible, as long as the steaming cups of tea and little plates of cakes keep coming. I wonder if I could hire them to just come re-do my house and garden for me.

I mean, really, look at this flower arrangement. One of their employees actually thought to arrange lisianthus in old jars with antique oil funnels. And it works. It should be in Martha Stewart, for God’s sake. 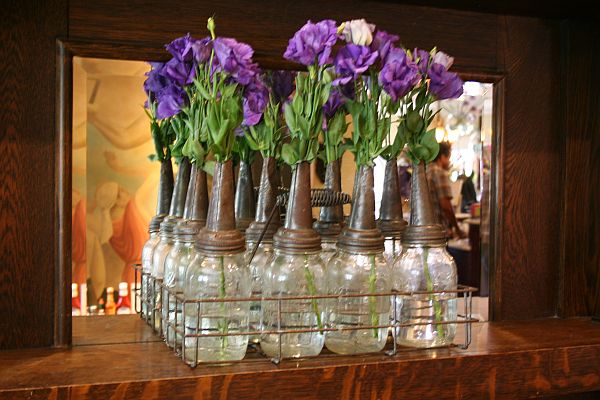 And then, there’s this:

A good hostess should pay attention to detail. A good hostess should never let anything, even putting lemon wedges in your tea, become a dull experience. I often see things like this in 1960s guides to entertaining. Housewives were often on valium in the 60s. All this magnificence and we haven’t even set foot in the cheese shop yet. I know, that’s all Los Feliz needs is another cheese shop. I will save my rant on unfair distribution of camembert for another day. It’s time to place our order and get on with the food, already.

The menu is almost identical to the menu at Aroma. With one glaring exception – no lobster club. You could have lobster added to a salad, but sadly, unless you wanted to get all “Five Easy Pieces” on them, finagling a lobster club sandwich is probably not doable. But I do like all of the options offered with the salads. The Asian Grilled Scallop Salad beckons, with its enoki mushrooms, fresh herbs, miso dressing and crispy shredded potatoes.

But since I started writing this up as a comparison piece on sandwiches, I thought I should try to stick with the format. It would have to be sandwiches. I had heard people swoon over the egg salad, so I thought I would give it a try, and substituted onion rings for fries. My nephew went for a fried chicken wrap and French fries. We also ordered a giant slice of a white chocolate/chocolate cake. Service was friendly in spite of being busy. We dutifully collected our silverware, assigned number, drinks and cake, and thus overloaded, carefully maneuvered our way back to our table between rickety, crowded chairs, “Excuse me, pardon me. Excuse me, pardon me.” We arrived safely with only some minor liberties haven been taken by a very friendly dog.

The massive onion rings were sweet, like big onion donuts. My nephew, an experienced New England fry cook, identified it as pancake batter. They were too intense to eat, but they just called out to be played with.

They didn’t have any white or egg bread, so I was stuck with sourdough for the egg salad sandwich. Egg salad is so bland, it really needs a bland bread. The primary flavor was not onion as I had hoped, but mustard seed and lots of it. It’s a pretty good sandwich overall, fresh and all that, so if you like mustard seed this one’s for you. 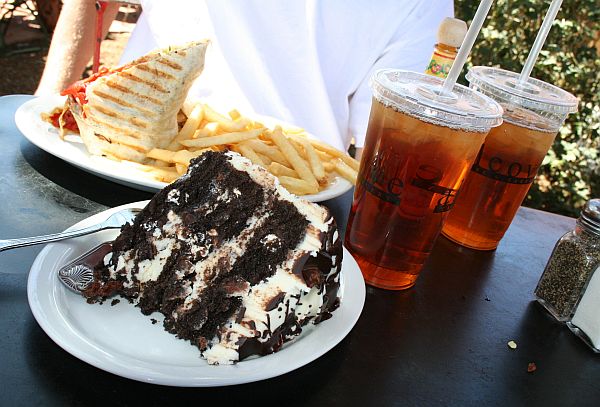 The wrap was excellent, with perfectly fried chicken. There was an overabundance of roasted red pepper, but they are easy enough to pick out. My nephew freaked me out by putting Tabasco on his fries, and then eating them mixed up with with the chocolate cake. I think that semester in Quebec gave him funny ideas about what actually goes with fries. Chocolate poutaine? I tried a bite, and it wasn’t bad, but I can’t believe someone without PMS would ever eat that. 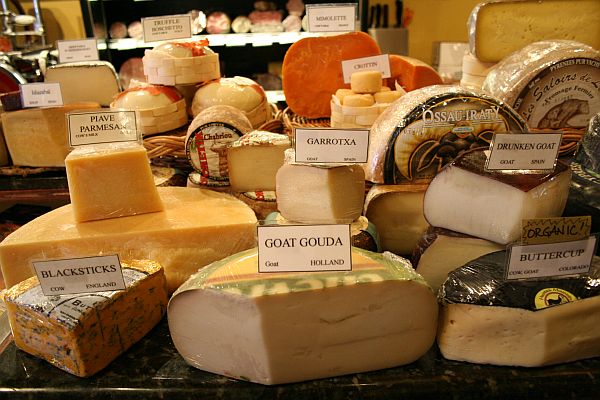 I stopped in their cheese shop to pick up a picnic dinner. This is where I would spend most evenings if I still lived around the corner. The staff was extremely patient, because selecting cheese can be an arduous process. They also have a section of little pre-packaged snacks and lunches. A half-hour and a hundred dollars later I had two bags overstuffed with cheese, charcuterie, and all kinds of little pickles and peppers. The round red peppers stuffed with goat cheese are highly addictive. This is definitely the place to hit before the Hollywood Bowl. 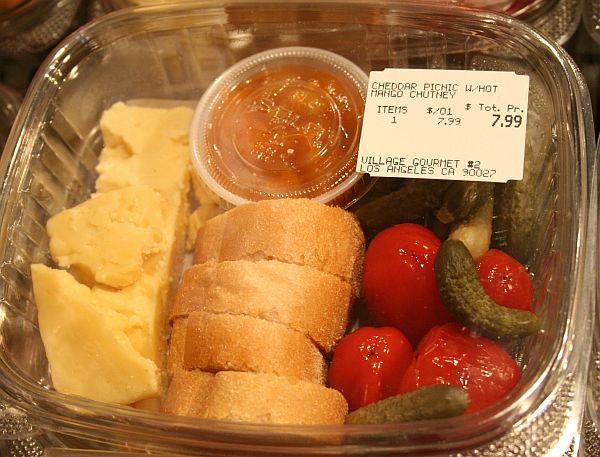 As I left my new, wonderful, even-better-than-Aroma rebound restaurant, I was charmed by a huge flower arrangement that looked like something out of Dr Seuss. Wow, they were good. The gentleman had given me permission to photograph the other flower arrangement. The ladies in the cheese shop had given me permission to photograph the cheese. I was so pleased with my armloads of bags bursting with gourmet delights, I momentarily forgot myself in the happy afterglow and I snapped a picture of the flowers. The guy behind the counter shouted, “Miss, Miss!” I pretended not to hear him as I gathered my purchases. He shouted again, “Miss! Miss! There is no photography inside.” I blurted out from post-traumatic-stress-disorder, “I wasn’t photographing the cakes! I swear! It wasn’t the cake!” He said, “There is no photography allowed anywhere inside. Anywhere outside is fine.” I could not get outside fast enough. So it’s a family thing. This intense paranoia is in their genes. Or maybe I am like the last guy on the J-Date blog. Everything was going great until I just suddenly stuck my tongue down their throat without warning. 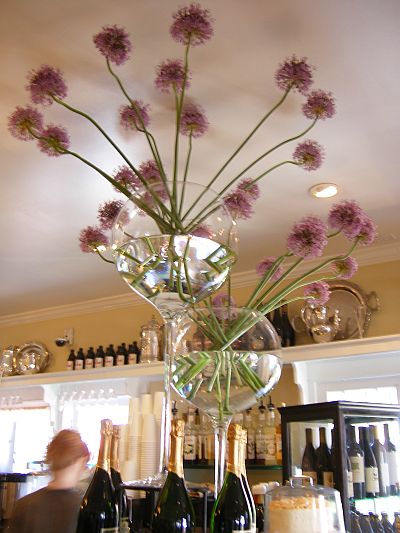