Rachael Ray Got Me Laid: A Guide to Pasta Puttanesca 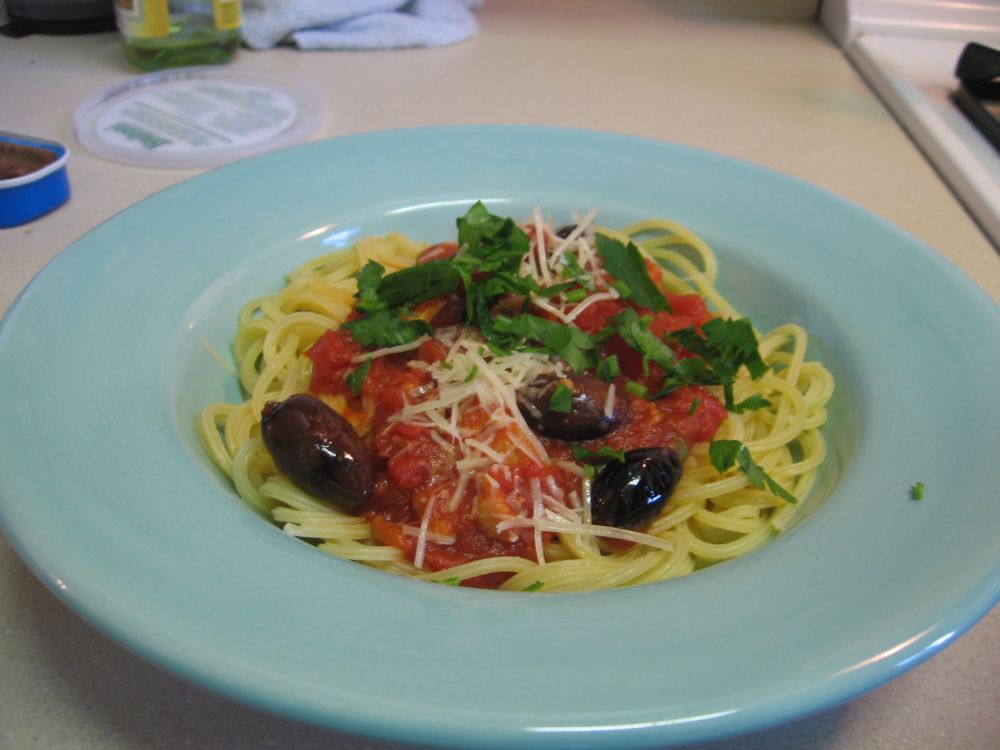 Can I make a confession? I've kinda got a soft spot for Rachael Ray's recipes. Not the woman herself - while I don't detest her enough to join a hate club or anything, I don't find her particularly witty or interesting or original. Now, Tony Bourdain - THAT'S my idea of a chef-slash-television-personality! And the fact that he'd probably cut me for calling him a television personality makes me love him even more.

When I first started cooking for myself, however, Rachael's 30-Minute Meals book was actually a great resource - the recipes were fairly simple, tasted good, and although they never lived up to their 30-minutes-or-less promise, they definitely were, dare I say, Yum-O. I also liked that she was fairly lax about measurements - a pinch of salt here, a dash of red pepper there, a handful of basil and a splash of olive oil - hey, it's cool! It'll all come out tasting good in the end!

The confessions aren't over yet. One of the reasons I started cooking seriously at home was - shameful, I know - to impress boys. Cooking dinner for a new guy become my second-date standby - and it seemed to work. He'd come over with a bottle of wine, we'd talk and relax while I chopped and sauteed and tossed pots about; I'd get to show off my skills as a cook, and hopefully he would begin to attach all sorts of sentimental notions of housekeeping, motherhood, and domesticity to my otherwise unsentimental, independent self. Plus, it was my way of showing that he didn't need to take me out to dinner or spend lots of money to impress me - all he had to do was sit down and enjoy the fruits (or meats) of my labor, and I'd know we could definitely keep hanging out.

Rachael Ray's recipe for Pasta Puttanesca became my recipe for love. It was fast, cheap, and easy, living up to its name quite nicely, and it was also pasta sauce that didn't come from a jar - impressive! Delicious! I started cooking it for every guy I thought might have boyfriend potential - and I don't know if it was the pasta or just my irresistable self, but let's just say that if dating were baseball, I'd be putting Derek Jeter to SHAME. (Well, okay, truth: I cooked this for every suitor except for my current Very Special Guy - the first meal I ever made him was a bloody-rare New York strip steak, mashed potatoes with homemade gravy, and bacon-smothered green beans. What can I say? He's really hot.)

So if you're a spicy lady or lad and you've got a hot prospect that you'd like to impress, give this recipe a shot - I mean, I know Rachael Ray is pretty much the antithesis of sexy (unless you like those goofy talk-show host types, pervert!), but this easy pasta might just get you an easy lay. 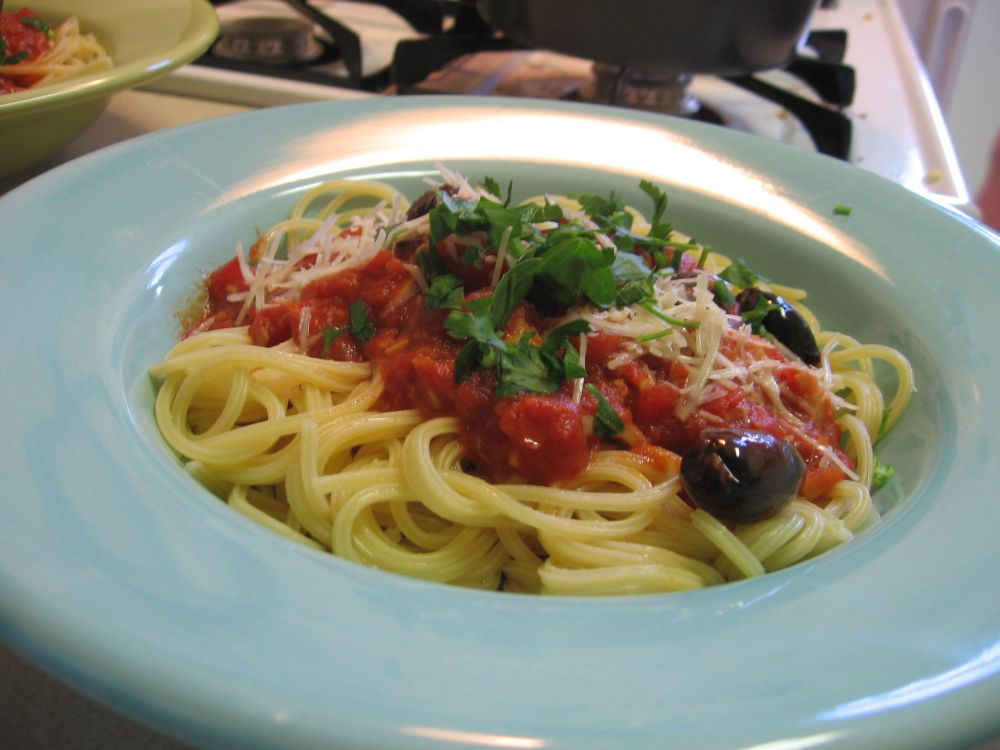 Get yourself together:
Olive oil
A tin of anchovies
4-5 garlic cloves, minced
Crushed red pepper
One large can of crushed tomatoes (the 32 oz size)
One regular can of diced tomatoes (the 14 oz size)
A handful or two of kalamata or black olives - whole or chopped, depending on whether or not your date wants to pick them out and let you eat them.
Three tablespoons of capers
A handful of chopped parsley

Here's all you do: Put the pasta water on to boil so you can prepare the spaghetti while the sauce simmers. Heat two tablespoons of olive oil over medium heat. Add garlic, 4-5 anchovies, and as much crushed red pepper as you can stand. Let the anchovies dissolve. Add tomatoes; stir and let simmer for about 10 minutes or so. Add olives and capers. Let simmer more. This sauce can basically sit on the stove over low heat for as long as you'd like - in fact, the more it simmers, the better the flavors can meld.

After the pasta's cooked, top it with sauce, cheese, and a sprinkling of parsley. Serve with bread and wine. Get lucky.