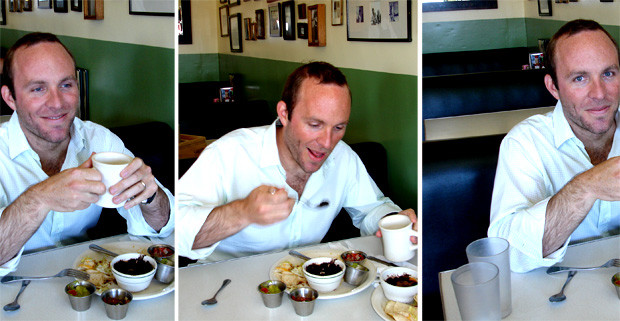 Over fish tacos at Snug Harbor in Santa Monica, we spoke with LA author Antoine Wilson about his darkly comic debut novel, The Interloper, and waxed poetic on writing and living in Los Angeles. Wilson will be reading tonight @ Dutton's, 7pm.

Your novel opens with the main character, Owen, making a somewhat unusual declaration, can you talk about that? In an earlier draft, Owen said “I hate books that start off with a bang.” Which is a bang – it didn’t fit because it’s him talking about writing books which is what I do, not what he does. It was a rant about first person narrators that run out and shake your hand at the beginning of a book – it’s never been my sort of thing. If you want to sell a book don’t begin it with “Hi, my name is...” So I did and I thought that was really funny. I like that he gave himself an 80% on the civilized person scale. Who would give themselves an 80%? I love that.

Without giving too much away, your book is constructed in a way that keeps readers guessing as to what is real, not real, who can be believed, not believed. Was this your intention from the outset or did this framework emerge over several drafts? Nabokov said the real drama occurs between the reader and the writer – or something like that. Or the reader and the text. He wasn’t as interested in the drama occurring in the work. I think I was playing with that idea and was very aware of it in the construction of the book – I wanted to play with readers’ expectations. I also wanted to pursue crime & punishment. The concepts, not the novel.

Your book explores different ways that families deal – or don't deal – with loss. You mentioned at the LA Times Festival of Books that this was in part based on your personal experience. How so? I wanted to explore grief – the kind of grief where you talk about it all the time and can’t move beyond it and the kind of grief where you never talk about it and that’s another way to do it. My older half-brother was murdered when I was seven years old. He wasn't someone I saw every day, so I didn't feel that loss acutely. But the people I was living with became different. So it was removed — me experiencing them experiencing the loss. He was missing for a period of months. They caught the guy, but he was eventually paroled. Through that experience, I saw that our justice system basically blows.

I don’t want to overstate the importance of this stuff in the book. It was just one of the sparks that got things moving.

You’ve done something that is rarely done well – but when it is, is our favorite kind of fiction – where the funny and the horrible meet. Neither feels forced, both amplify the human element of what is happening. How did this dark humor come about? After the book made its way into the world, it occurred to me that someone who never had a murder in their family might never write this kind of book. It’s dark, but the darkness that unfolds was something I had to live with and cope with using the full spectrum of emotions. I didn’t feel there was a clash with the funny stuff – I just kept thinking it was darkly comic. But if someone set out to write this book - decided to make it funny on purpose - the schism might be a little more obvious and it might not work. I meant it to be a funny book. It’s a train wreck. I think a train wreck should be funny to a certain extent. But a real train wreck isn’t funny…

No, it isn't. But what is funny is when Owen - in an attempt to understand the female psyche - tries on a lavender thong. There's chafing. What kind of research was done for that bit? A thong was involved, but it wasn't lavender. It was a green thong in real life.

Your book is set in LA, yet it's a somewhat generic LA in which the furniture store is called "Furniture Store", the bathroom store is called "Bathroom Store" and Owen calls their home "Our Hamlet by the Sea." What was your intention with these non-specific names? To make it seem like these events could happen anywhere? To make L.A. accessible? I knew I wanted to write a novel set in LA. I knew I wanted to capture my life in LA, going to the carwash in LA, going to classes on campus. I did so much writing about these things that over time, I managed to sneak my way into Owen's character and life by writing about my life in LA.

As for the generic names, it was totally a choice and was a Nabokovian affectation. I liked the way it sounded. There's a thing I tell my students and again it's a quote I can't remember. It has to do with the specific and the general. In fiction writing, the more specific detail you provide, paradoxically, the more universal it becomes. I should have listened to that rule and given things proper names.

Owen's increasing madness is a classic case of the best intentions gone terribly awry. His intentions are pure, he means well, but he makes a series of bad decisions. Is this brand of crazy particular to Owen or is it a larger comment on how we are all are just a few steps away from getting off track? A worldview you have of how close we all are to going nuts and wearing women's panties? It's definitely just Owen. Most people have a pretty well-defined sense of what's crazy and not. Yet on a smaller, daily scale, where the consequences aren't so large, we're doing it all the time. We come up with an idea of how to best handle a scheduling conflict and we say "I'm sorry I broke my leg this weekend", not expecting to see that person later at Starbuck's without your broken leg.

Favorite bookstore in LA? Dutton's...they're right down the street.

Favorite surf spot? I always say between the 310 and 805 area codes...essentially all along the coast.

Writers that you have been, are currently, or will forever be, into?
Nabokov - Pale Fire in particular. Thomas Bernhard. Voltaire - Candide. Murakami. Nicholson Baker. So many others...

A recently read book that you loved or secretly wished you had written? The Fermata by Nicholson Baker

How has living in LA shaped you, if at all, as a writer? When I moved back here, I had a huge silver Lincoln towncar. I called it the Silver Bullet. But it didn't fit in with Santa Monica. So I got this license plate that said: L84YOGA. [Wilson provides further illumination about said license plate on his WOT-WHAT blog.] No one who does yoga would have this license plate. But everybody here does yoga. So it was perfect for this town.

This city has a certain artistic freedom - there isn't any single or central commanding artistic voice so you're free to create. I love that about LA.

Once I was driving by Olympic and San Vicente. It was a cool evening, but it wasn't cold. I saw a homeless man pushing a shopping cart down the street, with the most amazing fire in it. This huge fire, just pushing his cart along. I thought: there it is. That's it. That is LA. That is one big piece of the pie chart.

At the LA Times Festival of Books panel, you mentioned that you initially thought you were too good for writing classes, then you took a few, and now you teach them at UCLA. Can you talk about that shift and why you see the value in them now? I originally thought: I'm going to mainline some Thomas Pynchon and write something brilliant without any sense of structure and also I'll write it while I'm traveling through Europe. Cause that's the way to do it, right? (Huge ironic grin.) No. I had to write for awhile to realize I had no clue. It was a totally immature point of view. There are so many beginner mistakes that can be cleared up through instruction.

So, can writing be taught? Reading as a writer can be taught. In the workshop model you learn more from your critiques of other people's stories than you will learn from feedback on your work. You get to see work in process, you read work that's not fully formed and can view it critically which helps you see how tricks are deployed. The danger is that the newly developed editorial ability interferes with your original voice and you get stuck because you're thinking about the product and you can't get back to your original process. It's been an interesting trip.

You are a contributing editor to the literary journal A Public Space. The first three issues have been packed with excellent writers. What role does this play in your daily life? An antidote to writing fiction? A juggling act? I met Brigid [Hughes] when I had a story in The Paris Review. I developed a friendship with her and when she told me she was leaving The Paris Review to start a new magazine, I asked how I could be involved.

A short story writer I know kept working on a story. It was really good but he kept re-writing it. I finally managed to get it away from him and his agent and I think it will be published in an upcoming issue. That's very rewarding...to find something that is great that might not necessarily find a place somewhere else - at least in the glossies - that's cool. It's cool to be part of something like that.

I'm so not involved in the daily workings of the magazine. It's great when a new issue comes out because there's all this work in there that I didn't even know about. So I get to be an editor and a fan. Brigid's now given me some insane assignment for a cool project a year from now. So we'll see how that goes...I'll let you know.

How are you different now that you've written a first novel? Now that it's out there in the world? When I go out at night now, I wear a laurel wreath. (Sheepish grin.) No, seriously, the greatest danger about being a novelist in this town is that you will buy into the sunshine that people blow up your ass. People have respect for fiction writers here that for some reason they don't have for screenwriters. People say to the novelist at a dinner party "Oh, you're a real writer." That's bullshit, screenwriting is real writing.

You always have to come back to the stuff that made you write in the first place. Whether you imagine a reader or not. Back before I knew anything about anything I was writing with the big voice, I was writing to literature with a capital "L." I'm trying to make my way back to that now. I'm not trying to get rich, famous, whatever. I just want to write. Having a book come out makes that complicated. You have to find your way back to that reason you started writing in the first place.