Flying with the Conchords 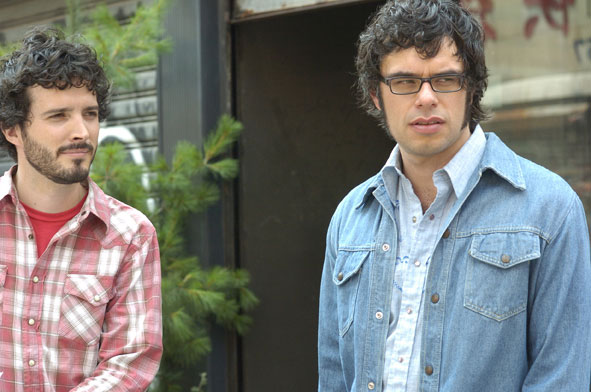 I first encountered Flight of the Conchords when they opened for Jon Brion at Largo in March 2006. The group, which is comprised of Jemaine Clement (perhaps best known in the U.S. for his Outback Steakhouse commercials) and Bret McKenzie, introduced themselves as “New Zealand’s fourth most popular folk parody duo.”

Their folk-comedy ditties/rap battles endeared them to the audience—and even made a fan out of Brion who stated at the beginning of his set that it was going to be near-impossible to follow lyrics like "…you are the most beautiful girl in the room. And when you’re on the street, depending on the street, I bet you are definitely in the top three.”

It’s now been a little over a year, and after gaining a steady following from their live appearances and “One Night Stand” HBO special, the Conchords were given the green light for their own series on HBO. The new eponymous show combines bits from their live act with new material, and the network is using a rather unique tactic to get the word out about the program. In the weeks prior to its official June 17 debut, the first episode will be available for viewing on myspace, YouTube, iTunes and more. The guys will also be embarking on a mini-tour during which they'll stop by the El Rey on July 11.

After seeing commercials for the new series during shows like “The Office,” I couldn’t help but feel a bit disappointed to have lost the ability to share the “undiscovered” Conchords with my friends and then bask in the coolness of my find. But I’ll get over it.