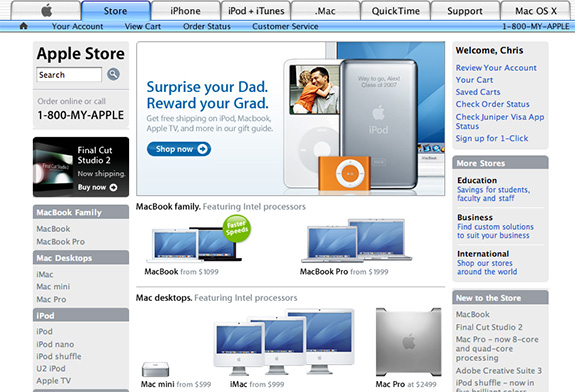 Welcome to the latest edition of 'Ask the MACist', the column where I answer your Macintosh and other technology questions. Our question this week comes from Ryan in Silverlake. He asks: I'm seriously considering a new Mac but I always hear rumors about newer ones coming out so I always end up waiting. Should I just bite the bullet and do it or should I wait?

When to upgrade or get a new piece of technology is a question that plagues even me, your humble Macist. The very nature of technology these days almost inevitably means that whatever piece of tech you buy today will be better and cheaper about ten minutes after you buy it. Devices like cell phones, mp3 players and computers get faster, better and cheaper on almost a daily basis. The tech industry is one of those rather unique businesses where this kind of thing is not only encouraged, but is also necessary for its very survival. But is newer necessarily better? And, when is a good time to buy a new piece of tech if you know something better will definitely be coming along any day now?

The answer to this question is really pretty simple: if you're concerned too much about what the "next big thing" might be, then it will probably never be the "right" time for you to upgrade or buy a new piece of technology. In the end, it depends on what you want to do with the thing you're going to buy, how much you can afford to spend on it and, most importantly, if it will be able to serve your needs now and for the next few years. My usual guideline when people ask me this question is to have them consider what they do with their current Mac and how much longer they think their current Mac can continue to adequately meet their needs. For the most part, I use my computers for things like writing this column, working with photos, using the web and sending email -- nothing too taxing for my Intel-based MacBook Pro.

So, those are my needs at the moment and looking ahead it seems like those will make up the majority of be my needs for the next few years at least. Therefore, following that logic, it wouldn't make sense for me to consider a new Mac at this time. However, if my Mac was a little older, powered by something other than an Intel processor or could not handle enough RAM resulting in sluggish performance or had too small a hard drive, I would definitely consider an upgrade. At the moment, a G4 powered Mac should still be just fine for most normal users who want to write email, surf the web or do most basic things with their Mac. However, once the newer version of OSX is released, code named Leopard, having a G4 (or older) processor will definitely put you and your Mac at a disadvantage.

Many of the features in Leopard will be best utilized by those of you using Macs with Intel processors. Some features, in fact, won't even work on a non-Intel powered Mac. Intel is the future for Apple and they really aren't looking to support Power PC users much longer. I can't blame them, really, as developing software for two different platforms has to be a strain on their development dollars. As a business, it makes much more sense for Apple to concentrate on one kind of software to run on one kind of processor -- and that's exactly what they are doing.

In the end I go back to what I said at the beginning of this column and sum-up my Mac (or other tech) upgrade philosophy as follows: When upgrading, get the best Mac you can afford at the time and use it for as long as it serves your needs. When it starts to be unable to take care of business, its time to consider an upgrade. Try not to be bothered about your piece of tech losing value the moment you buy it. Even though it will be worth less and less and you will eventually need to replace it with something newer, faster and cooler, you will still be able to enjoy your new Mac during that time. And after all, enjoying and using your Mac is the point, isn't it?

If you try to chase the latest and greatest all the time, you'll end up like me and be forced to upgrade you computer, cell phones and other tools several times a year. An expensive, and for most of you, unnecessary, proposition. But for me, its all about business and being informed about the next thing -- but that's not for everyone. For the normal, less obsessive user of technology -- like most of you reading this column -- follow the above upgrade guidelines and you should find your needs being met very well now and for several years to come.

Ok, that's it for this week's 'Ask the MACist.' But remember, if you have a question about anything Mac, Mac-related, or even something about other tech like TiVo, Blackberry or even Windows, send it to me, The MACist, at: themacist at gmail dot com.