Aroma Hasn't Called Back Yet? 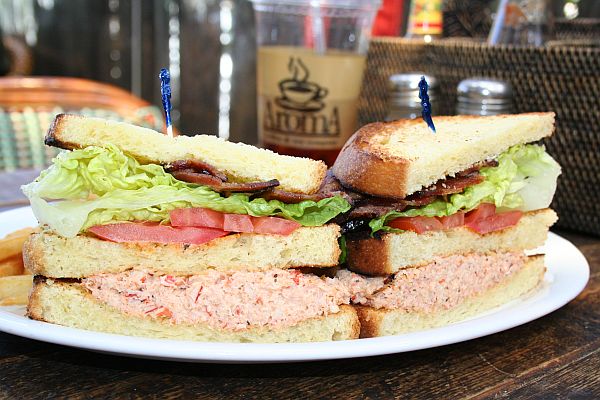 Have you ever gone out with someone who was so attractive that you were never really sure if you were good enough for them? And sometimes they treated you like shit because they knew they could get away with it? But you kept going back, no matter what, because they were really, really good in bed? I think that is what is happening between me and Aroma Coffee and Tea. Aroma is my bad boyfriend.

The service at this precious little restaurant on Tujunga has always been perfunctory, but I didn’t mind being ignored as long as my basic needs were being met (sounding dysfunctional yet?). I secretly enjoyed the feeling that I could probably commit a crime, right there, and they would just continue ignoring me. I mean, after all, they cater to celebrities, and there is a yoga studio next door. If I were a famous starlet coming in all trashed on oxycontin, or showing up all sweaty after Bikram yoga, I would definitely want to be treated as if I were invisible.

The first time I sat in the shaded, leafy patio, I felt so at home. The other customers were friendly and chatty, but not in an invasive way. Although the patio is absolute perfection, that is not the reason to swoon over Aroma. That is not the hook. The hook that keeps me coming back is their seafood sandwiches. The lobster club is actually a traditional club, with apple-smoked bacon stacked above the lobster salad, perhaps the most trafe sandwich ever invented. It is made with real Maine lobster. The kind of lobster East coast transplants jones for. I have seen this sandwich put Bostonians into fits of ecstasy.

The crab cake sandwich definitely contains real Dungeness crab, and lots of it. The outer coating is crispy and browned, while the interior stays moist and meaty. The ancho aioli is just similar enough to remoulade to keep me happy. Crab paired with a sweet and smoky red pepper mayonnaise is a match made in heaven. The breads are fresh and freaking fantastic. The lobster club arrives on a lightly toasted egg bread, while the crab cake rests upon a slightly chewy ciabatta. It’s really not fair to the other sandwiches. 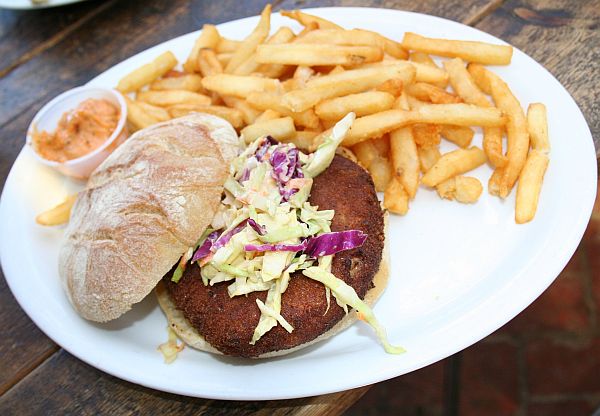 Aroma’s other offerings are nothing to sniff at, but they are not worth crying over all night like the seafood sandwiches are. The brie and apple panini with caramelized onions is nice, but it is inexplicably served on rosemary bread. The flavors of brie and apple are too subtle and sweet to stand up to something as overpowering as rosemary. The overstuffed roast beef panini is strong with horseradish, but the bread is already getting soggy by the time it hits the table. Oh, by the way, their french fries kick ass too. Of course.

Aroma will even make me breakfast in the morning. The morning menu is also extremely satisfying, especially the popular huevos rancheros. There is not enough sauce to soften the deep-fried tortillas, so the effect is somewhat similar to chilaquiles. Very good chilaquiles, with properly cooked eggs, black beans, and ripened-to-just-that-magic-moment avocado. 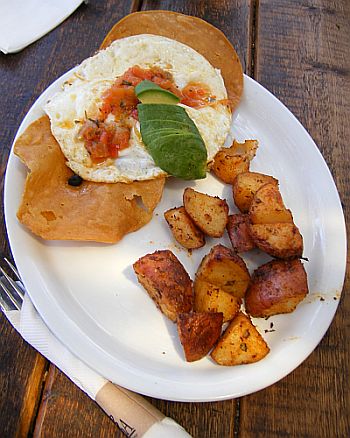 Between the sandwiches and the romantic patio, I had fantasies of long afternoons spent with my new amour, lounging in my best hat over iced tea in the shaded arbor. But the more I started talking to my friends about my new infatuation, the more “issues” they brought up with Aroma. The prices are inflated. You always have to wait. Bourgeouise valet parking. The service is downright unhelpful. One friend pointed out that they do not label their cakes, but whenever you ask them to list the flavors, they get all huffy.

So I decided to put our relationship to the test. I arrived early in the morning and ordered breakfast. Since the place was empty, I started quizzing the server on the cakes. There was no one waiting behind me, so I wanted see how far their patience would last. I wanted to prove my friend wrong. She just didn't understand Aroma the way I did. There were probably 12 different kinds of cakes in the case. How many flavors would they name before they got angry? About three cakes in, we were doing very well, so I asked for a slice of one (Triple berry – yum). I figured if I ordered a slice or two between queries, I could get her through the entire bakery case.

As long as I was actually finding out all of the flavors, I thought, why not take pictures of the the cakes? Normally I would ask permission before taking a picture inside of a restaurant. But both of the workers were otherwise occupied, and as I said, I was used to them pretty much ignoring me. Plus, there were no other customers around for me to make uncomfortable. So, while my server was busy slicing up a chocolate crunch something-or-other, I leaned down and started taking pictures of the display case.

Suddenly, I magically became visible to the other server. She asked, “May I HELP you?” in the tone that does not mean, “May I be of some assistance?” but the tone that means, “What the fuck do you think you’re doing?” I said casually and I hoped charmingly, “Oh, my friend always has to ask for all of the cake varieties, so I thought it would be cute if I took pictures for her.”

She did not find me charming. She did not think it was cute. She did not act casual in any way. She told me in no uncertain terms that photographing the bakery case was not allowed. Her manner was so intense and uncomfortable, it made me uncomfortable.

I had broken the rules.

I was gauche and uncool.

I should never have tested our relationship. The tension in the room was palpable. I’m sorry, I know that last sentence is so cliché, but it was exactly that. Palpable. I changed my breakfast to a to-go order. I was presented with the manager’s business card, “I just spoke to her, and she’ll be happy to talk to you about all of the cakes.” I accepted the card, and thus dealt with, I was dismissed. If we were romantically involved, this was the point in the date where someone says, “I think it’s best if you just leave right now.”

I skulked into their little book store, feeling very small. But also very confused at the seriousness of my faux-pas. Photographing the bakery case was cause for an immediate, urgent call to the manager? I paced and browsed the books lining the wall while I waited for my to-go order. They were all religious and self-help books, a kind of shallow pretense of depth. I should have known. I’m sorry, Aroma. I mean, I still like you. I just don’t like ME when I’m WITH you. 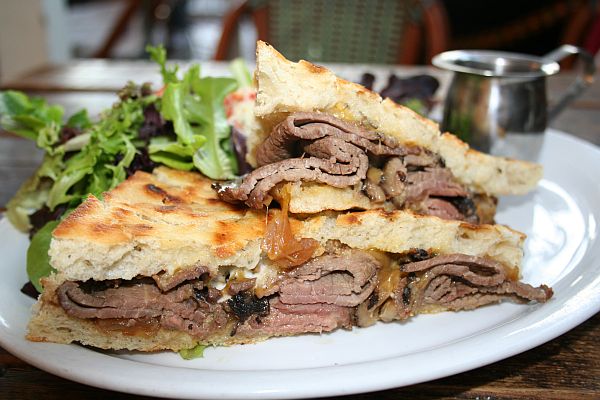 But like any bad-boy boyfriend, I had to give it one more chance. I put on my lowest-cut top, my “skinny pants” and brought along my attractive and charming nephew. Sure enough, Aroma took me back. Even though it was busy, the handsome guy behind the counter was witty and helpful. See, I knew it was just a misunderstanding. Aroma didn’t MEAN to make me feel bad. But I had to be sure. There was a huge blueberry pie in the bakery case. I mean, this pie was massive. If I were a pie, I would be this pie’s bitch. So I asked my new friend, the handsome counter guy, if I could take a picture of the pie. He said, “Sure. As long as you’re not doing it to try to steal the recipe.”

His reply made many thoughts swirl around in my head all at once. But I have numbered them for your convenience.

1. He was so quick with his answer, it was clear they have some kind of baggage. That would explain why they are so camera-shy. Maybe they have been hurt in the past. The only thing more attractive than a bad-boy is a bad-boy who is secretly hurting inside.

2. Really. I could just buy a whole cake and make a splosh video with it if I wanted. There was no way of stopping me. And to be honest, that big, juicy pie made the idea kind of tempting.

3. I’m pretty good at breaking recipes. But I have yet to look at a photograph of a blueberry pie and think to myself, “Yup. Definitely cornstarch. And just a touch of lemon juice.”

4. They don’t even make their own baked goods. The cupcakes come from Auntie Em’s, and the cakes come from various other suppliers. How can you be so proprietary of something that isn’t even your own creation?

But even as I pondered the photography ban, my order arrived and my lust for their sandwiches was re-ignited. Later, as we swooned over the perfection of the blueberry pie, my nephew stammered, “This pie…Oh my God…like...if I were in prison…” I finished his thought, “If you were in prison, that pie would sell you for a pack of cigarettes”. 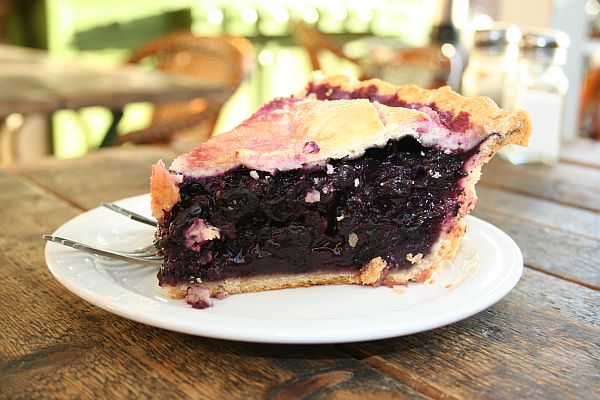 Before I finished writing this post, I thought it would only be fair to call the number on that card. I mean, they told me to call the number, right? And I wanted to see what had made them so protective of their cakes. I was easily able to reach the manager on the first try, and we proceeded to have the most awkward phone conversation ever.

She explained to me the myriad reasons for banning photography - paparazzi, location scouts, and corporate espionage. She divulged, perhaps accidentally, “…and then that other place in Encino went and called themselves Aroma.”

I followed up, “So, you've been burned?”

She said, “I don’t know what you MEAN by burned.”

“Well, I thought maybe the policy was instituted because you had had a bad experience.”

She asked me what my name was again and it took every ounce of self-control in my body not to say, “Mr. Slugworth.” She then proceeded to lecture me on common courtesy until I felt like a completely thoughtless asshole. She asked me if I still wanted to take pictures, because she could arrange it if I was still interested. I decided to make an appointment for couples counseling instead.

Last week I was driving through Los Feliz while talking to a friend on the cell phone. She asked me where I was.

"It's the sister restaurant of Aroma."

"Oh my God. I think it's time for an intervention." 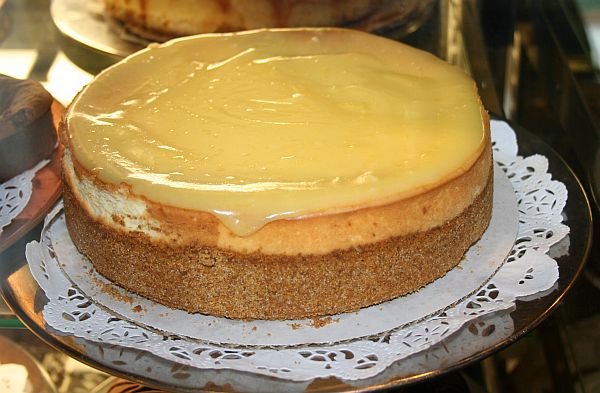