Thanks in part to her Husband, Hillary Clinton is Assured Much Coveted Reverse-Cowgirl Vote 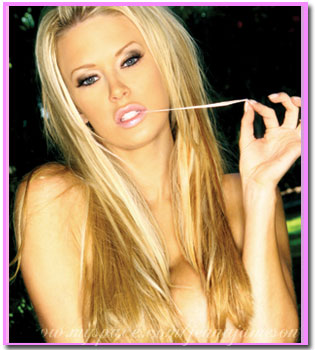 At the end of a long interview conducted by a press release website and posted today, Jameson is not asked about her struggle with cancer that lead to a miscarriage, instead she is asked about politics:

PR.com: Is it safe to assume that you're a liberal and a democrat?

Jenna Jameson: Yes. I don't like to label myself as a democrat, but I'm certainly extremely liberal.

PR.com: Do you find that the climate of the adult industry changes when there is a Republican administration versus Democratic?

Jenna Jameson: Absolutely. The Clinton administration was the best years for the adult industry and I wish that Clinton would run again. I would love to have him back in office. I would love to have Al Gore in office. When Republicans are in office, the problem is, a lot of times they try to put their crosshairs on the adult industry, to make a point. It's sad, when there are so many different things that are going on in the world: war, and people are dying of genocide. It's sad that they feel that they have to target the sex industry, and not target the problems with insurance and the homeless and the AIDS epidemic. There are so many things that need to be cleared up before fucking pornography. I look forward to another democrat being in office. It just makes the climate so much better for us, and I know that once all our troops come home, things are going to be better and I think that getting Bush out of office is the most important thing right now.

Jenna Jameson: I love Hillary. I think that in some ways she's pretty conservative for a democrat, but I would love to have a woman in office. I think that it would be a step in the right direction for our country, and there would be less focus on war and more focus on bettering society.

We'd love to make a crack about the fact that Hillary voted for this war, but Jenna is married to one of the scariest mixed-martial artists ever, so, uh, we will keep our cracks to ourselves. So to speak. Jenna's wikipedia page is tremendous, by the way.