Meat Puppets at the Troubadour 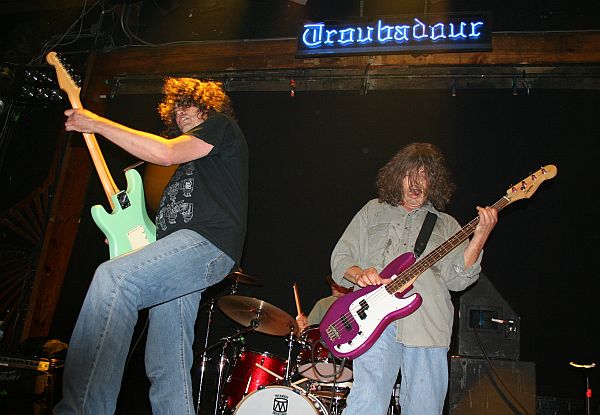 The Meat Puppets are back with a vengeance! Last night the Troubadour hosted the Los Angeles performance of the Meat Puppets’ reunion mini-tour. Brothers Curt and Cris Kirkwood have not shared a stage since the debacle that was supposed to be their tour opening for REM back in 1996. Since then, Cris’ personal struggles have been no secret to anyone, reaching their crescendo when he was shot by a post office security guard in 2003. The reunited brothers are about to release their first CD together since 1995’s No Joke. The new CD, Rise to Your Knees, was recorded with drummer Ted Marcus. This time, drummer Derrick Bostrom is not on on board. He is rumored to have quit music entirely.

We arrived at the Troubadour late and missed Elmo Kirkwood’s band, and only caught the last two songs of opening band Trainwreck Riders. One of the songs made me want to do the pony. The second song I heard was one of those fast, cymbal-riding country-punk songs. It was as if the Meat Puppets had invented a new genre of music, and this band was playing that genre. Of course, who knows what’s happening in Phoenix? Maybe there is a whole generation of Meat Puppet-inspired bands. 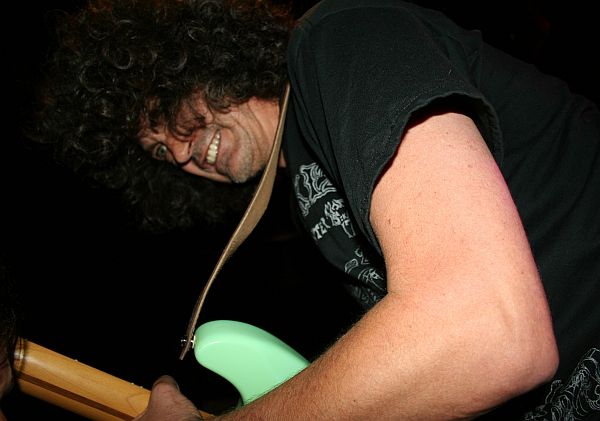 We saw Dave and Laura from Third Grade Teacher there. I commented on the high testosterone-to-estrogen ratio in the room. Laura said she likes it when there are a lot of guys at the Troubadour, because she always scores the coveted VIP Loft pass. She showed me a little gray sticker that gets you into the side loft. I went back and asked the doorman if I was supposed to get one, and he asked me coldly if I was on the list. Denied! Later, when I was cleaning out my purse I found the tiny gray sticker he must have handed me when I first arrived. So apparently asking for one is the only way to make sure you don’t get one. Who knows how many of those things I must have just thrown away over the years, thinking it was some kind of advertisement. No big deal, because I always like to be front-and-center at a show. I’m not going to sit daintily in the ladies section anyways.

We didn’t have to wait long before the Meat Puppets hit the stage and started rocking. Their new drummer. Ted, bears an uncanny resemblance to Derrick Bostrom. In fact, he even plays like him, steady, but a little stiff. The only noticeable difference is that Derrick used to play the high-hat left-handed, instead of crossing over with his right hand as most drummers do. Ted plays the high-hat with the traditional crossover. He also looks a little bit like Teller, from the comedy/magic duo Penn and Teller. Derrick always reminded me a little more of “James at Sixteen”. 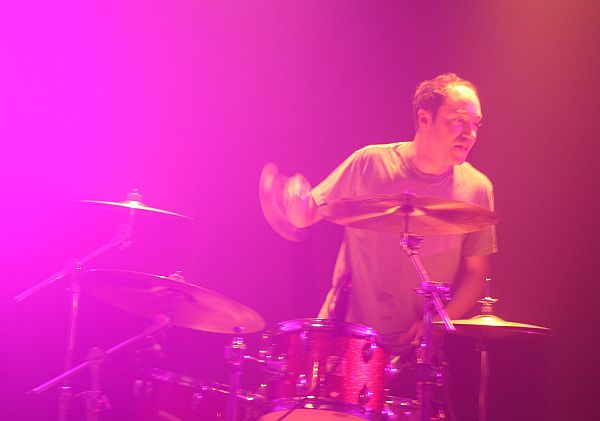 The sound in the Troubadour was good, depending on where you were standing. Curt asked them to turn down the guitar, which invoked loud cries of disapproval from the audience. Some people complained that they couldn’t hear the drums at all. I was getting mostly monitor near the front, so some of the songs were kind of fuzzy and seemed to just blend together. But compared to all of the times I have seen the Meat Puppets since 1985, up to and including Curt’s recent “sole survivor” tour around 1999, this is the tightest and most energetic that I have ever seen them. The Kirkwood brothers were totally in synch, exchanging nonverbal cues and jamming off of each other. But whereas Curt is always playing to the audience, even glancing at me to cue me of upcoming photo ops, Cris often seemed lost in the music. It was almost trance-like. But when he did meet your eye, it was clear he was fully present and having a really good time. Sometimes he even tends to get kind of goofy and reminds me of Angus Young. 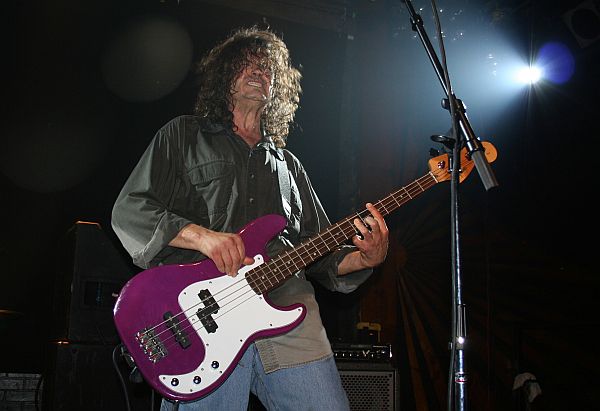 I can’t remember the set list in order. It seems like the majority of the songs were from Meat Puppets II, including Climbing, Plateau, and Oh Me. They also played Sam and This Day, from Forbidden Places. They played their big hit, Up on the Sun, fairly early in the set, so they got that out of the way. They did not play The Whistling Song, which Chris whistles. But they played a different song where Curt whistled a lot. They ended the set with Backwater. I was sad that they didn’t do my favorite song, Bucket Head.

All during the show, some drunk, blonde girl kept grabbing my shoulders, poking me in the back, trying to push in front of me, and screaming things like, “Share the love!” in my ear. I seriously thought I might end up having to fight her or something. It was kind of weird, right on the heels of all the hubbub at Patti Smith. Maybe drunk girls are in season right now. Near the end of the show, she was joined by a fellow squealing girl. They started a long, screeching conversation, which was pissing off the videographer, because they were right by his mike. Suddenly, the blonde girl’s friend screeched my name and grabbed me, and started jumping up and down. I was then obliged to jump up and down with her. It turned out to be a friend of mine’s girlfriend. Let’s just call her “Mary”. So, great, the crazy, drunk girls were with me. During the lull between the set and the encore, Mary suddenly ran up on stage and was immediately grabbed and hauled away. 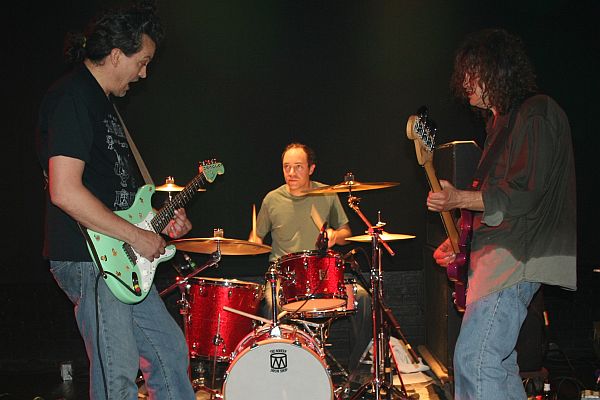 The Meat Puppets returned for the encore, starting out with Pee Pee the Sailor, a goofy great. I think this is when they might have played Monsters. Curt wanted to stop after two songs, but Cris talked him into playing a third. From the amount of debate over song selection, I think they had already gone way beyond the set they had planned. I considered moving over a little to try to get better shots of the drummer, but I noticed that the blonde drunk girl had gone down. On the ground. She was squatting down on the floor next to me, and there was no getting around her. I didn’t know if she was puking, rolling a joint, searching for a contact lens, or dead. I considered checking on her, but it is kind of like a “let sleeping dogs lie” situation. Maybe if I had a stick to poke her with, I would have tried that.

My husband, Bob, had to get up for work in the morning, so we bailed right after the show. He asked me, “Did you see Mary? I saw her outside when I was smoking. She said, ‘Isn’t this great? I just got kicked out. I ran up onstage to try and get the set list.’ Then she turned around, and ran right back inside past all of the security guards and straight onto the stage again. I think she did end up getting the set list after all.” 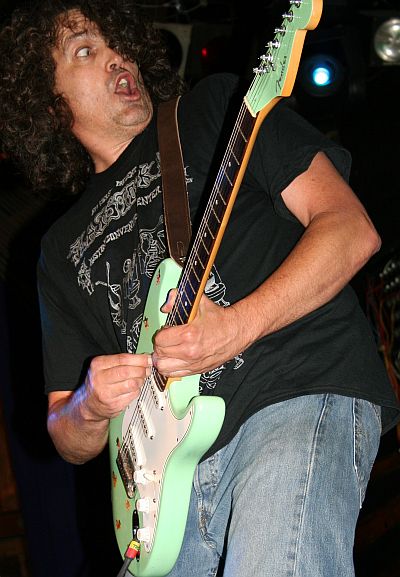 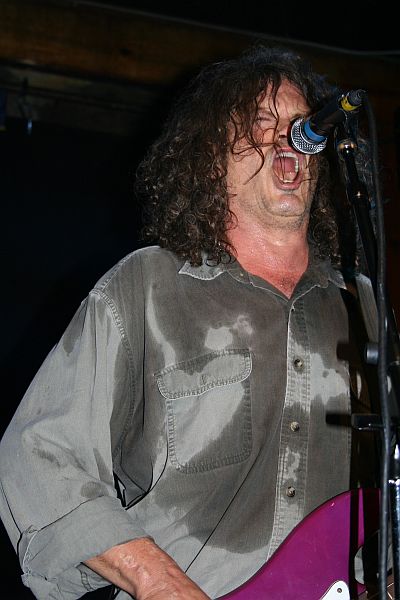 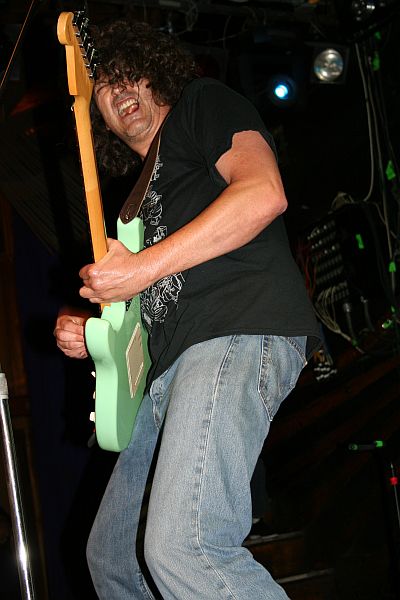 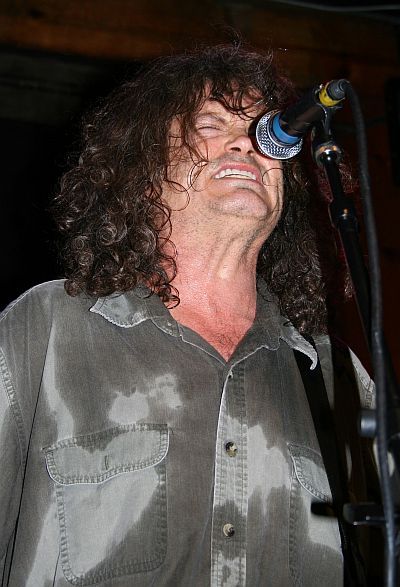 (All photos by Elise Thompson)

UPDATE: Here is an excerpt from my husband, Bob, showing me up by writing a much better review for his discussion boards...

...And so off they went, taking a couple songs to really find their groove. Sounding good, if a bit tentative. But as they reached the end of "Up On The Sun", the whole mood shifted. Curt's eyes rolled back in his head as he leaned back & launched into one of the farthest-out psychedelic excursions I've ever heard. After that, it was all about the extended endings: Cris hidden behind a mass of hair, lost in the moment, Curt pushing, pushing, to seek, to find and not to yield. These are the moments where the Meat Puppets become so much more than the sum of their setlist, the most "live" of live bands, wandering out into the space where anything might happen. And they did it a lot last night, and it was thrilling. I can only imagine what they'll be like with a few weeks of touring under their belt.