We Lost To That?! 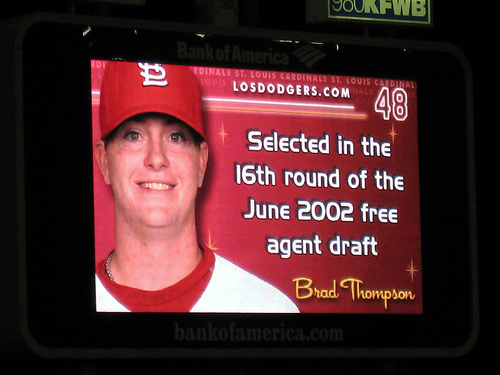 The Dodgers lost to that pitcher. Let me just say that he is one ugly man. That’s all. You can come up with your own insults. Trust me, my friends and I made up plenty ourselves.

Back to the game. There is only one word to describe the pitching performance of Brett Tomko: PATHETIC.

Before I could settle in and focus on the game, Tomko gave up six runs in the first two innings and was finally pulled in the third after giving up two more runs. For those of you deficient on your math skills, that’s a total of eight runs in 2 1/3 innings. He gave up eight runs to a team with the lowest batting average in the majors (.234) and every other offensive statistic imaginable in baseball.

Strike one for Grady: In the middle of the second inning I was calling for Tomko to be pulled, but I saw no one warming up in the bullpen. Why was no one warming up? It was more than obvious that Tomko’s pitching was more like Bush’s Iraq war plan. Also given how well the bullpen has been pitching, why not get someone in there right away? When Grady finally got Rudy Seanez in there, it was too late. I have to give the bullpen credit because they gave up zero runs in 6 2/3 innings. NONE.

Strike two for Grady: Bottom of the ninth with the bases loaded and two outs, Olmedo Saenz, the #3 hitter, is walked making the score 8-4. Time for the #4 hitter Jeff Kent, right? Oh no, Grady substituted Ramon Martinez for Kent in the seventh inning. This is the same Jeff Kent who hit a solo homer in the fourth inning. Martinez, by the way, is hitting .170. So you can guess what happens.

I don’t have anything more to say about this game, so thankfully Grady Little doesn’t get struck out (unlike the Dodgers when the bases are loaded). I just want to thank the people who gave me free tickets to the infield loge section for tonight’s game. I’ll be there tomorrow night in my regular top deck section.

Now here’s a question that has dogged me for a while. What in the world has happened to ass? 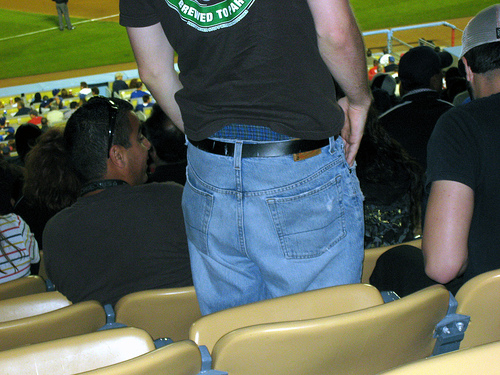 This is not just a problem confined to Dodger Stadium. I see these pancake asses more and more on the street. This is an affliction that needs to be stopped now. It is a problem that is becoming just as serious as the Iraq conflict and methamphetamine abuse. When Pancake Ass Boy is putting his stuff in a Lady Pocket, what can she hold on to? If she puts her hands near the pancake ass, it will suck her in like a black hole.

So mens please. Make sure you have an ass. If not, hide that shit up because none of us want to be sucked in that vortex. Merci beaucoup.