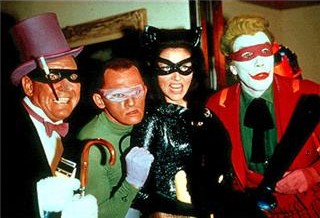 If you missed your soaps this week, and if your ex is actually complying with that restraining order, you may be missing out on your daily dose of drama. Well, if the three-dimensional world has been too uneventful of late, I can assure you the fur has been flying in cyberspace. And if I may be so bold to ask, please grant me one giant, all-encompassing (sic) for this post.

This week, Martini Republic, one of the more incendiary LA blogs, went ka-blooey all over the place. In our exclusive interview last week, we brought you the very composed and dignified resignation of Joseph Mailander as editor of Martini Republic.

Soon afterwards, a post appeared on Martini Republic clarifying that Mailander was no longer responsible for the content of the site. It is what one might call a back-handed clarification:

Please note that our former editor is no longer responsible for the now-deplorable content at Martini Republic.

Our retired editor (and current web-stalker) should not, repeat not, be held accountable for “the kind of gratuitous, childish vulgarity that [he] opposed at the site and left the site because of…”

So things were perhaps not as dignified and amicable as they might seem. That post was soon followed by an open letter to Martini Republic’s readers in which it is insinuated that Mailander has been interfering with content. In response to this interference, one group appears to be jumping ship:

…It turns out he (Mailander) hasn’t really departed at all, and doesn’t actually intend to allow the site to continue without substantial impediments …and has begun placing virtual IEDs among the bar stools here at Martini Republic. …Hopefully, some semblance of sanity will return to our friend and former colleague, or former friend and colleague, but unfortunately we’re not terribly sanguine at this point, and we may have to see you all in a different watering hole in the future.
We’ll keep you apprised.

Over at Mailander's new blog, Mainbrace, he attempted to side-step the fray:

I've said all I'm going to say publically on the matter (and nobody should forget that I still own a healthy segment of that nice property, so I'm not rooting for its demise in any way), but if you have any need for followup questions or inquiries about what's next, please don't hesitate to email me at joseph.mailander-at-gmail.com. On May 4, however, perhaps after some non-public triggering event, he pulled a 180 and publicly "outed" a previously anonymous blogger, posting his full name, photograph, and hints about a somewhat checkered past.

Then in his next post, Mailander appeared exasperated by the drama. By the end of the post, he has clearly decided to just shut the whole thing down:

All this is ridiculous. It's just a blog. It's nothing to have a heart attack over. Maybe five people care, and barely. The recriminations, they're just silly.

What I'd like to do next with that blog, which I can almost barely stand to mention at this point, is shut it down. I don't like the content there, I don't like the mockery and recriminations there, and that puts me in an unsual spot: technically, I'm publishing something I can't stand. I think it's crazy that a guy would go to the mat over his right to be vulgar at a blog, and I think it's equally crazy that anyone at all would support him if the blog's publisher didn't want it that way. But that's me, my circle, and my perspective. I'm sure plenty of people think vulgarity is a worthwhile enough cause to fight for.

The world won't miss that blog. Hell, if DailyKos disappeared, people would stop thinking about it in about two days. (What's the appeal of reading things you agree with, over and over, and being used as an online direct-mail recipient anyway? I have never understood that.)

I hope there's some peace to be had for all in getting rid of MR, and that people are able to go their separate ways without too much more bitterness and recrimination and mockery. I know I've thrown out my share; but it's exhausting, to keep up with it all, to have it all echoing. This does appear to be Mailander's final statement on the matter. LAist received the following statement from those bloggers who used to be part of the Martini Republic:

After co-founder Joe Mailander noisily quit MR, then returned to the blog just long enough to Molotov cocktail the blogroll and post vitriolic attacks against his former co-bloggers, Martini Republic was shut down. We, the site's remaining members - Alex, Donna, Lance and TS - now blog at Martini Revolution: http://www.martinirevolution.com/ . Obsessions include politics, life, music, sports, style, humor, and basically whatever the hell else we feel like writing about. But we draw the line at divulging private information about other bloggers. A girl's gotta have standards, after all.

In completing this post, I was sure to ask both teams a series of hard-hitting follow-up questions. After much wrangling, it was revealed that Team Martini Revolution's favorite lunchspot on the Westside is Hal's Bar and Grill.

Mailander has since removed his post "outing" the mystery blogger. His favorite lunchspot on the Westside is currently the Fairmont Miramar.