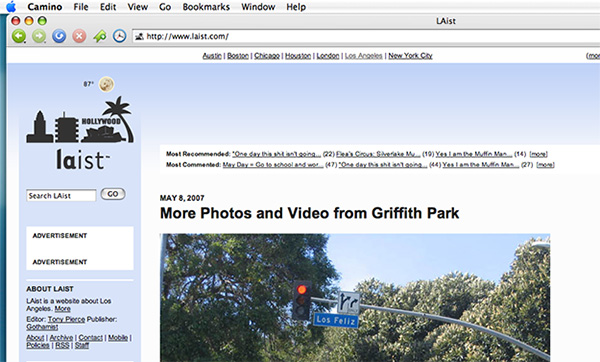 Welcome to the latest edition of 'Ask the MACist', the column where I answer your Macintosh and other technology questions. Our question this week comes from Mark in Santa Monica. He asks: I'm new to the Mac and was wondering which web browser I should use. Safari, Firefox or something else?

Which web browser to use can sometimes be a hard question to answer. The three major ones for the Mac that I use most often - Apple's Safari, Firefox and Camino — all have their advantages and disadvantages. In the old days, Apple used to bundle Microsoft Internet Explorer with every Mac sold. Later, Apple dropped IE in favor of it own Safari web browser.

Then, as it often does in the world of technology, other browsers for the Mac started to pop up and try for their share of the Mac browser market. Recent statistics put Firefox ahead of Safari for Mac users and just behind IE 6 for Windows users with Camino not even showing up on the charts at all. So, for the Mac, it would seem Firefox would be the popular choice and the one you should go with. However, it might not be the right choice.

Firefox on the Mac has steadily improved during its various revisions and updates and many bugs and refinements have been squashed or implemented. However, one or two things about the browser still need to be worked out and often contribute greatly to its problems. First, its a resource hog -- often claiming 25 to 30 percent of the CPU power on a Mac -- not what you want your browser to do, especially when its just sitting there idle.

Second, for whatever reason, it has a tendency to crash sometimes when confronted with complex pages or when I have more than a couple tabs open at the same time. Firefox is, however, pretty speedy, allows for a great deal of customization via skins and extensions and is compatible wiht almost any website I've ever visited. So, it does have good points too.

That last bit about web page compatibility can't be said as much Camino -- although it is my current favorite browser. Camino has many of the same characteristics as Safari and cousin Firefox and its latest version is plenty fast at rendering pages. My biggest complaint with Camino is that it has trouble accessing pages that Firefox can go to. For example, I always get a warning from my bank when going online to check my accounts.

The warning tells me my browser isn't compatible with their website but I then hit 'ok' and can continue on with no problems. I have a similar experience at the T-Mobile website. Trying to log in and access my account information results in an endless loop back to the sign-in page. Odd, really, considering I have no trouble accessing a T-Mobile web page when I sign in at my nearest Starbucks using my Hotspot account.

Safari is also sometime plagued with the same incompatibilities as Camino when visiting certain web pages. Although, those have been improved considerable lately with the recent updates to the browser. My chief complaint about Safari at this point, other than what I previously mentioned, is its speed rendering pages.

Keep in mind that sped is relative and YMMV but in my experience, Safari is the slowest web browser for the Mac when compared to Firefox and Camino. So, if page rendering speed (aka the time it takes a page to "load") is important to you, you might want to look elsewhere that Safari.

In the end, the best tactic to take is most-likely what I, and many other Mac users, do -- have more than one web browser. I keep both Firefox and Camino in my dock at all times and use one or the other as the need arises. Lately, I've been sticking more with Camino than with Firefox, mainly due to Firefox's taking up so much CPU power. However, there are some sites I simply can't visit without Firefox. So, there it sits in my dock, ready to bounce into action at the click of a mouse.

So, at the moment, the answer is to use both Firefox and Camino or Firefox and Safari -- in either case keeping Firefox as your secondary go-to browser in the event Camino or Safari needs some help. This combo will provide the best web browsing experience for users as well as have the least amount of impact on your Mac's resources.

That is, until Mac OSX 10.5 (aka Leopard) is released. I feel confidant that Apple is working on ways to vastly improve Safari even as you read this. So, in a few months time we may find that Safari really comes into its own and takes its place at the top of your web browser list.

Ok, that's it for this week's 'Ask the MACist.' But remember, if you have a question about anything Mac, Mac-related, or even something about other tech like TiVo, Blackberry or even Windows, send it to me, The MACist, at: themacist at gmail dot com.