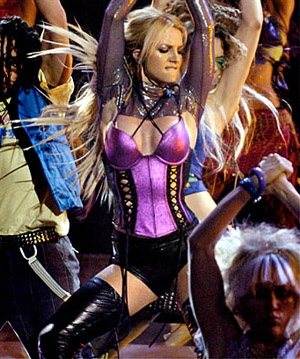 Something miraculous happened last night at the House of Blues last night when Britney Spears made her return to an LA stage.

Actually several miraculous things happened last night on the Sunset Strip that I cannot remember happening in my long history of seeing live music in LA.

The first thing was, people paid hard-earned money for tickets (about $100 face value for a pair after all was said and done - more if you got them off eBay or a scalper) for a performance that would only last 15-18 minutes from a performer who chews gum as she lipsyncs.

And they ate it up.

LA is notorious for having dead audience who sit back and clap politely but never really get into it. Seriously, when was the last time you heard of an altercation at an LA concert? They're rare birds.

We've seen it all, and if we haven't we'll see it soon.

But tell me the last time you were in a building in LA where nobody had a cell phone.

Because Britney still has a few pounds of momma weight on her, and because these three Southern California House of Blues gigs really were post-maternity, post-rehab, post-K-Fed warm-ups, the artist terms were no cameras and no cell phones and of course she got her way.

And it was amazing. People actually talked to each other, and danced, and drank, and smiled, and were able to focus up.

Here in LA we all see people texting and using their cell phones constantly - while they drive, while they skateboard, while they please their lovers - we are attached to our phones. And for the two hours from the time the doors opened to the time we were reunited with our technology several hundred Los Angelenos were free to enjoy the here and now and it was as liberating as donning a wig and dancing around to songs MTV has played for us time and time again.

There was an energy in that place like we've not experienced in a very long time. It was the beginning of a new beginning. A celebration that our little knucklehead had made it through a troubling time in her life. And a reminder that Britney Spears isn't a full-time gossip magazine cover girl, shes an entertainer. Sorta.

Whatever she is, she belongs on stage and it was very nice to have her back there. Because when you think about all that she'd been through, she's lucky to be a) alive b) not in jail c) not in rehab d) not making more babies with Kevin.

Excellent reasons to wave your hands like you just don't care.

AP file photo of Britney when she had hair