Patti Smith at the Roxy: Pushin Too Hard 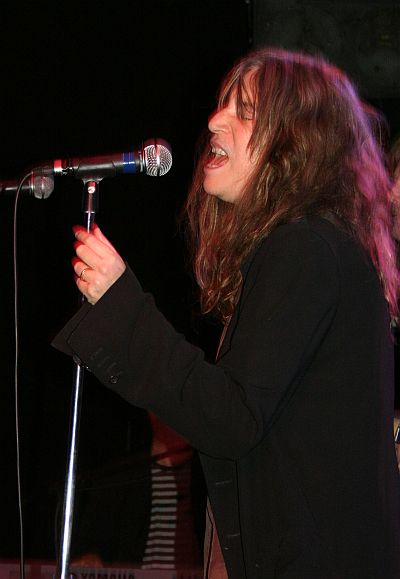 Last night Patti Smith put the rock in the Roxy. Then she tore it back out, spit on it, stomped on it a bunch of times, punched it in the face and put it back.

Patti was in her element last night, backed up by a band comprised of family and long-time friends. Supported by one of her earliest collaborators, guitarist and legendary rock journalist Lenny Kaye, Patti Smith had heart and soul to spare. Jay Lee Daugherty is the original Patti Smith Group's drummer, and the bass player, Tony Shanahan, has been with her since her 1995 comeback tour, "Gone Back".

It's the first time I have seen her perform with a keyboard player since the death of her close friend and collaborator Richard Sohl. Andy Paley, who substituted for Sohl on tour once during the 70s, is touring again with the band playing keyboards. Except for when Tony Shanahan played keyboards. When Shanahan was on keyboards, Patti's own son, Jackson Smith, took over bass playing duties. Oh, and sometimes Jay Dee Daugherty comes out from behind the drums to play acoustic guitar. But only because he didn't have his accordian. Are you still with me? I should have bought the Cliff's Notes.

Tickets were in short supply, with scalpers asking 300 dollars a pair out front. As soon as the doors opened, the crowd rushed in to claim their spots and did not move ever again. Not once. Maybe they were all wearing astronaut stalker diapers. I managed to slip in on the side, one person back from the stage. There are very elaborate territorial rituals involved in standing near the front of the stage. Little societies form to circle the wagons and help keep interlopers at bay. A sociologist could have a field day here. One thing that has always impressed me about the Roxy is that their cocktail waitresses will serve you right in the middle of the pit. One day I am going to sneak in a serving tray so I can disguise myself as a server and push my way into the center of the stage. 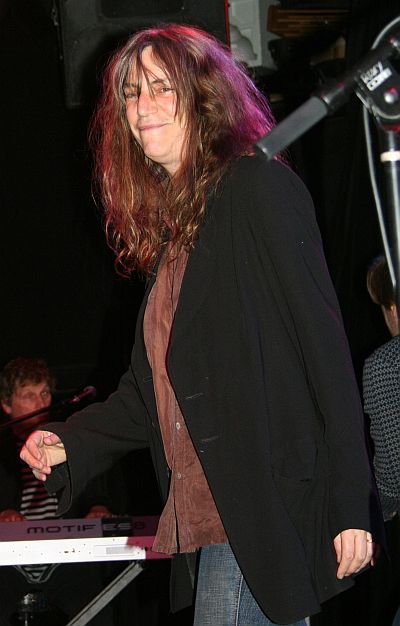 I've noticed the intensity of the territorialism has nothing to do with the style of music or age of the audience. It has to do with the level of fanatic obsession. Very few performers inspire this kind of cultish worship like Patti Smith. The crowd at the Roxy was pretty fanatical. My husband, Bob, had enough after one loud shouting match with Crazy, Pushing Girl #1. He decided to go stand in the back where the sound was mixed better anyways. 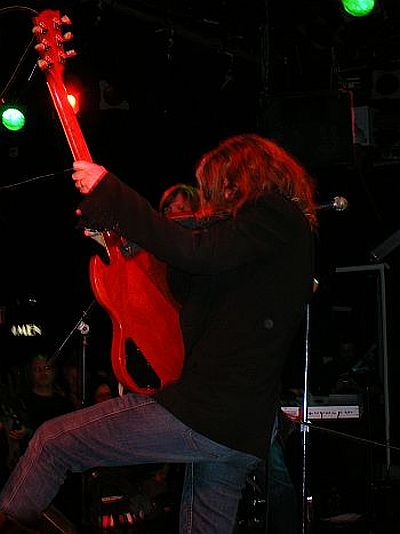 Finally, the curtain went up, and there was Patti Smith in all her majestic glory. And there was Lenny Kaye with his perfectly coiffed hair. She started off with "Everybody Wants to Rule the World." Considering this audience was ready to cut and bleed for Patti Smith, it was clear that none of them had bothered to buy her new album, "Twelve". Each new cover song was greeted with surprise and confusion. No one around me had even known she just put out a cover album, a la "Pinups". Patti went straight into the crowd favorite, "Redondo Beach", and then went back and forth between covers and originals for the rest of the night. 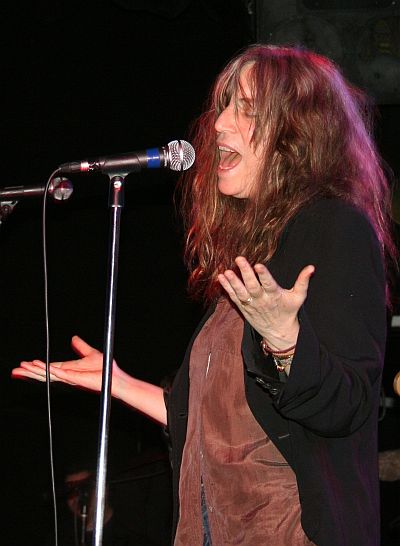 "Free Money" and "Within You Without You" were some of the best performances of the first set. Her interpretations of all of the songs are genuine and beautiful. Then she rocked the living hell out of "Are You Experienced?" dancing, running in circles, and flapping her arms like she was doing the Humpty Hump.

Her voice sounded better than it ever has. But the band didn't quite have it together yet, and Patti constantly apologized for forcing us to watch their "rehearsal". I felt like it was an honor to watch the interplay between the band members as they figured things out. They were also having to use rented equipment since their own instruments were already en route to Europe. Unfortunately it meant that Daugherty didn't have an accordian to play for "Helpless", but it was painfully adorable to watch Patti Smith gently stroking and comforting her rented guitar, promising it that she wouldn't hurt it. Considering how intense and punk rock she can be, she has a charming sweetness about her. This side of her was particularly evident when she was drawn irresistably to a young child in the audience and went over to check on his welfare and to autograph a poster for him. 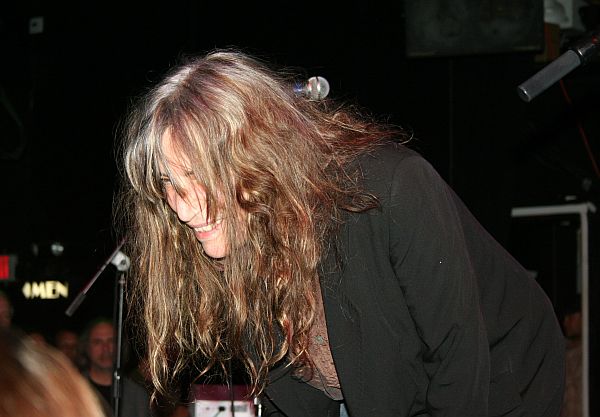 She chatted a lot between sets, pushing "Aqua Teen Hunger Force" and taking her shoes off to show us her new "Meatwad" socks. She also commented on the Harvard Crimson, which had called her "stupid" and referred to her album as "karaoke." She told stories about getting in trouble for staying up late the first time they showed a Beatles movie on TV. She talked about wanting to go to record signings as a kid, and how she doesn't mind doing them now because she remembers that feeling. She plugged the Amoeba Records signing, joking, "So get those "Horses" albums out from under your beds!" 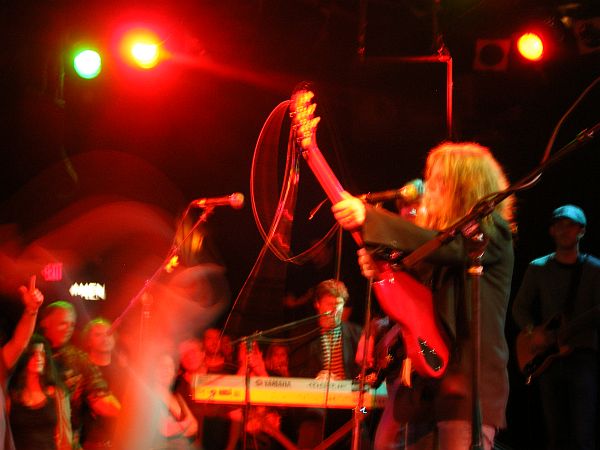 She had some difficulty remembering the intro to Lou Reed's "Perfect Day", but it was one of the most touching performances of the night. It made me a little teary-eyed. She forgot the words to the notorious anti-suicide song "Everybody Hurts" and giving up, hilariously sang," and if you can't remember the words, fuck it, go hang yourself". Smells Like Teen Spirit" lost her with its tongue-twisting chorus, and the audience desperately tried to cue her. Finally, she said, "Fine. What is it?" And walked over to the crowd with the mike to get the next lyric.

At one point my purse strap broke, and I bent down to pick it up. Suddenly, crazy girl #1 was back, right on top of me, stomping all over me, "I yelled. "What the fuck! I'm on the floor! Fuck off!" She had that crazed, out-of-control look that small puppies get when they think they are going for a walk. If this was the Who in Cincinnati, this is the chick who would have trampled me to death. 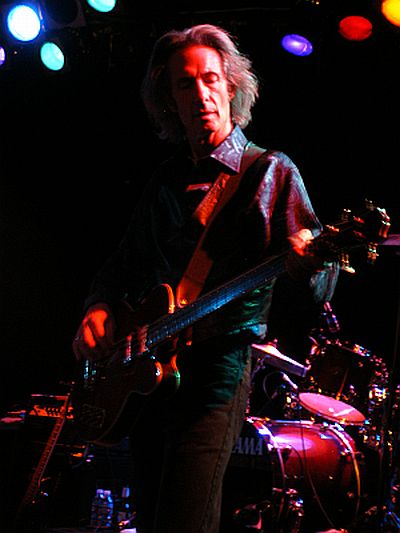 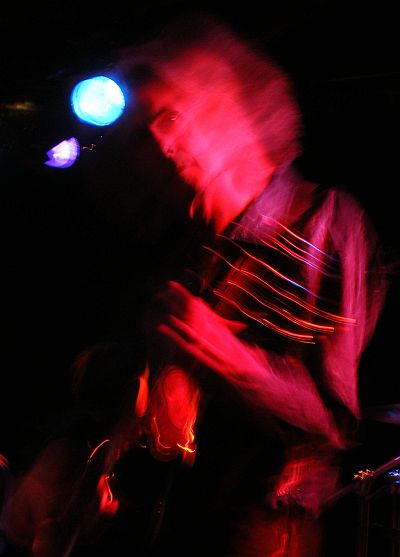 All Photos by Elise Thompson