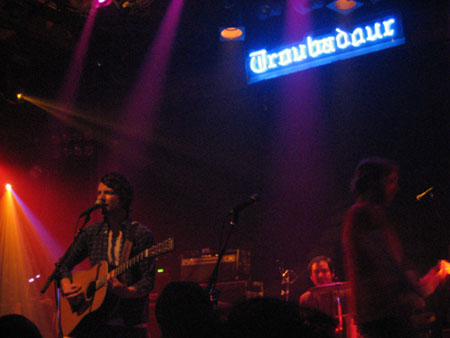 Sea Wolf opened for Sloan last night at the Troubadour. The band featured music soon-to-be released EP, Get To The River Before It Runs Too Low.

Lead singer Alex Brown Church, the bands only invariable member and also current member of the band Irving, felt like a young Jeff Tweedy. The kind of guy who can’t help but seem genuine in everything he does. Melodically lilting and filled with hopefully melancholy, the songs fit the venue nicely. The Troubadour’s wooden walls playing perfect compliment to Church’s loping, folkish sensibilities.

Personally, I don’t think the band has found enough ways to differentiate itself from others, like maybe Matt Pond PA or even Bright Eyes. You can almost feel the weight of their untapped potential on their shoulders. But it’s that potential, coupled with Church’s innate ability to weave a tune you’ll be humming the morning after the show, that will make me stick around to see what they do next.

Get To The River Before It Runs Too Low will be out May 8 on Dangerbird Records. They will also play the ExPlex this Friday, May 4 with The Little Ones, The Bird and the Bee, and Dengue Fever as part of the Silver Lake Film Festival’s Music Fest.