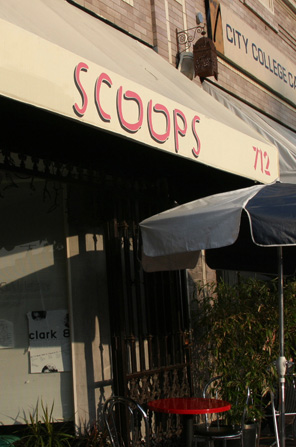 Scoops, a colorful little ice cream shop and gelateria next to LACC on Heliotrope, is the creation of a man named Tai, who went to CalTech and clearly loves his customers. He lets them try each and every flavor as many times as they see fit until they've picked the right one, (although at a dollar a scoop, why not pick two, right?) and relishes watching them grow giddy as they hop from one to the next, slowly building momentum as they make sense of the exotic flavors — Blackberry Mint, Pea & Tahini, Green Tea & Figs...

Each flavor is made by Tai daily, and no day's menu is exactly the same. So, be careful what you fall in love with, it might not be there on your next visit.

Except for Brown Bread. It'll be there. It has been since the beginning.

Whether or not Scoops has the most dazzling array of flavors ever concocted is open for discussion, but I know of nowhere else where Grape Nuts are thrown into the mix. Brown Bread does just that, complimenting the cereal with a slightly bitter caramel ice cream. It was the first flavor to sell out the last time I was there. I guess there is a lot to be said for tradition.

I thought Lemon & Basil sounded promising but it never got on its feet. The fruit’s tartness shot out of the gate but was quickly floored by too much basil. A hint of salt didn’t do much to help things.

The best flavor I tried, cashew & cardamom, seemed simple at first. But, when the peppery spice began materializing from beneath the rich, nutty base, I started to think that each subsequent bite was going to reveal more of some profound, life-altering truth. 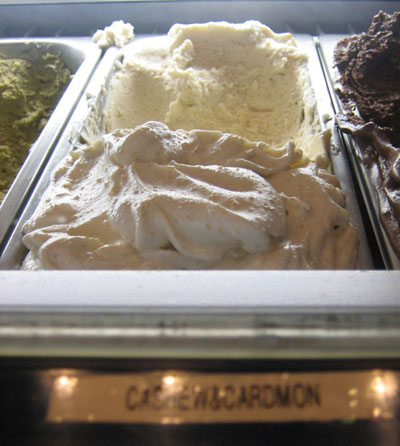 Tai usually features a few vegan options too, if you swing that way.

And then, there’s Bacon & Maple, possibly the most original and easily the most disturbing ice cream flavor, ever.

I have yet to be there when the ice cream has, but having sampled many of Tai's wares, I can actually imagine him pulling it off. Something about the interplay of salt and sweet, maybe even a little smoke.

Like any great craftsman, Tai pushes the boundaries of his medium, trying to do things no one thinks possible, and isn't afraid to fail. It’s just that in his case, success is attained by distilling a wholly complex and unique flavor into scoop form.

And personally, I hope he keeps striving for that success for a very long time.