Tech News Roundup - Apple and Microsoft In the Money, Blizzard Kicks It Up a Notch and AOL's 'homage' to Yahoo 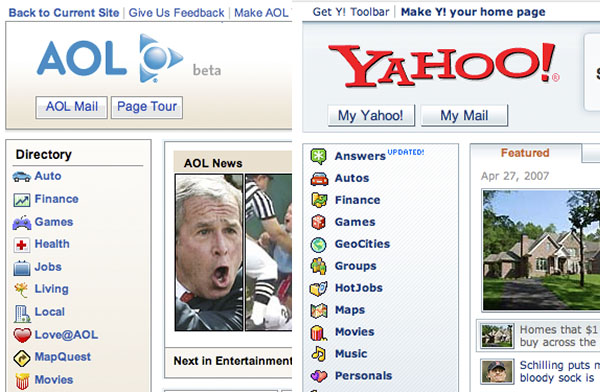 Some interesting tech-related news from around the web this week.

• Imitation may be a form of flattery (the sincerest kind, so they say) but AOL, I think you might have taken it a bit too far.

• AT&T Chief Edward "Moneybags" Whitacre is retiring. His going away present? $158.5 Million. Not a bad present. I bet he won't try to return it.

• Apple issues a fix for the battery issues that plague some of its portable Macs. According to Apple if this doesn't do the trick, call them and have your battery replaced.

• In other Apple news, the company recently released its latest financial report for Q2 2007. Long story short the company made a crap-load of money. For more detail, take a look at this from Google Finance.

• Not to be outdone, Microsoft also posted its earnings this week too. Like Apple they also made a crap-load of money again this time. I guess the Redmond giant isn't going anywhere soon. That's ok, I do like Microsoft Office for the Mac so keep making that please.

• Blizzard, the folks behind the very addictive MMO 'World of Warcraft' are working on an even better way to suck your time away online. As if you needed more ways to do that?

• According to Steve Jobs, people want to own their music and not just rent it. So, don't look for a subscription-based model bing put to use at iTunes very soon (and probably never). He's right because you should never argue with iSteve.

• Looking for an online backup solution for your computer? Use a Mac? If so, you might want to Mozy over here. They also have a Windows version too (of course).

• Lastly, if you've ever wondered how to get a link to your site from one of the most influential, successful, intelligent (and non-fat) web entrepreneurs of the last several years Jason Calacanis, then check out his link-bait rules to make sure you're doing all you can. Man that guy is smart. And did I mention he's in no way fat. Let's just make sure that's clear.