A Sandwich You Can't Refuse: The Godmother at Bay Cities Italian Deli 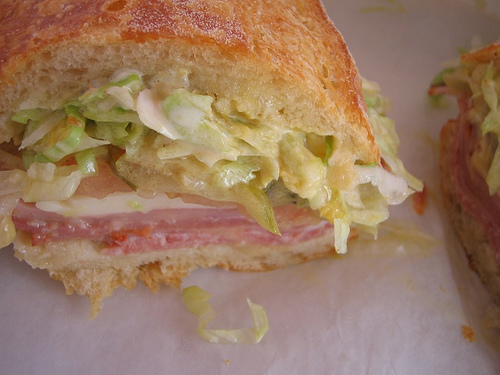 I believe in America. I also believe in America's Italian delis, more specifically one found in the unlikeliest of places: Santa Monica. This being America, however, you do have to work hard and maybe even call in some favors for your lunch. The struggle to get your hands on one of Bay Cities Italian Deli’s enormous, delicious sandwiches begins in the parking lot: it’s that classic Los Angeles scenario, too many shiny expensive SUVs and too few compact parking spots. The traffic spills out onto Lincoln Boulevard, much to the dismay of beach-bound passersby. Instead of trying to organize the madness, the security guard on patrol talks on his cell phone and watches the gridlock with bemusement. Once you’re in the place, you’ve gotta elbow your way through hordes of oversize-purse-wielding sorority girls and their sweatsuited male cohort to snag a ticket for the deli counter. Oh, and good luck not getting distracted by the aisles and aisles of Italian, Spanish, Lebanese, Greek and other imported delicacies – is that Nutella I see? Oooh, oooh! San Marzano canned tomatoes! Is that – could it be – fennel pollen? Didn’t Mario Batali do something cool with that? Oh no, did they just call my number? Stay focused and jump to attention or else the guys behind the counter might pass you by: they’re too busy putting together generous sandwiches packed with Italian cold cuts, provolone, spicy pepper salad, and zesty dressing.

The most famous of these meaty wonders is The Godmother, a greasy marvel, with Genoa salami, mortadella, ham, prosciutto, and provolone encased in freshly baked, crusty Italian bread. The sausage sandwich is also pretty stellar: covered in tomato sauce and grated cheese, a grown man can take down the large size in one sitting, but he won’t be standing back up anytime soon. We're also partial to the prosciutto sandwich; you can choose from three different varieties of the thinly sliced cured ham: American, Italian, or super duper special expensive Italian. The deli counter also offers a wide selection of sides, salads, and other entrees like eggplant parmegiana and lasagna. We haven’t tried the cannolis yet, but we’re optimistic. Very optimistic.

Once you've got sandwich and fizzy French lemonade in hand, you can either park it outside at one of the cement tables and watch the absurd comedy taking place in the parking lot, or you can wander the aisles and marvel at the eighteen different kinds of anchovies, fifty different balsamics, a wide selection of good canned tomatoes, hundred-dollar truffle infusions and oils, cheeses galore, freshly made tapenades, all shapes and sizes of pasta, and a great wine selection in the back. They've got ladyfingers and amaretti and biscotti and lots of other cookie-like things whose names don't really translate into English but probably mean "nun's nipples" and "baby tongues" and other fun stuff like that.

They take online and fax orders, which might be convenient if you're stopping in for lunch during the week and don't want to spend your lunch hour waiting with the hordes. They also open at 9am Tuesday through Sunday (closed on Mondays, though - blast!), so go early on the weekend and pick up enough sandwich supplies for the week. We'll be there tomorrow morning, clutching our ticket and mumbling something about America, justice, and the honor of eating really good prosciutto.