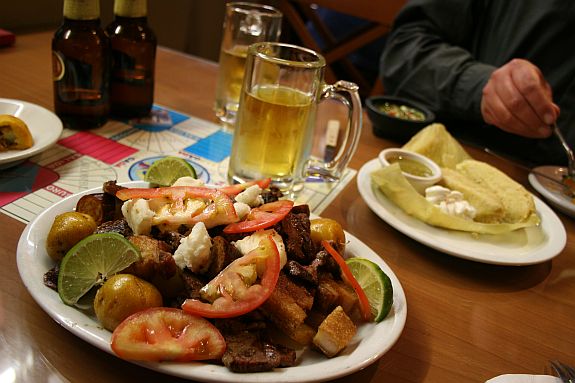 Sick of sushi? Tired of Thai? Want to impress your friends by turning them on to an exciting new cuisine? Try a little Colombian! La Maria Restaurant on Victory Boulevard in North Hollywood is one of those little holes-in-the-wall that foodies dream about - undiscovered and unspoiled, with reasonable prices and an experienced chef. Chef Antonio Prado worked in such Los Angeles favorites as Hugo’s and Joan’s on Third before opening La Maria. The food is just familiar enough to be comforting, but just unusual enough to keep things exciting. The menu is half Caribbean-influenced Colombian and half “Cuisine of the Americas”, which are Mexican-inspired dishes. The room is small and cozy, with a large mural on one wall. It is designed to make you feel as if you are in a little town square.

The empanadas are puffy without being greasy, and the heavily spiced shredded beef is a nice change from the usual ground beef filling. Sometimes corn tamales can be too sweet, but La Maria’s tamale de elote is savory, with little threads of saffron running through the masa.

For main dishes, try the picada or sobrebarriga. The picada is definitely a trip. It is a good thing to order if you are a curious diner, and want to try a little bit of everything. Even the “mini” size is more than enough for one person. Bits of steak, chorizo, blood sausage, new potatoes, deep-fried yucca, fried plaintain chips, chicharrones and arepa are all just tossed together on the plate without any sauce or rice to bind them. The blood sausage is gamey, and crumbly with bits of rice, somewhat reminiscent of haggis. The chicharrones are thick squares of fried pork skin, mixing fatty, meaty, crispy, and chewy all in one bite. Torn bits of arepa, which is similar to a thick corn tortilla, are strewn around the dish. If you are looking for something more familiar, the sobrebarriga is like a Colombian pot roast in a mild sauce, almost like something your mother would make.

Some of La Maria's desserts are a walk on the wild side. Natilla con Arequipe (translated as “Milk Skin with Colombian Sweet”), is a thick pudding studded with coconut. It tastes like evaporated milk and is similar to East Indian sweets. The “Colombian sweet” is simply dulce de leche. It is definitely interesting, but I would probably go with the safer flan or rice pudding next time. Because there will definitely be a next time.