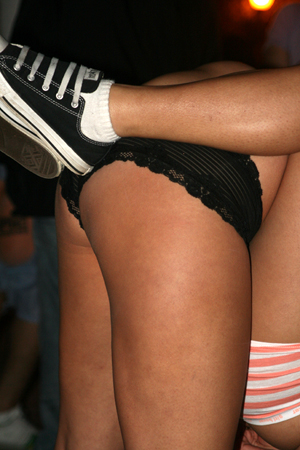 Let me start by saying that I feel downright filthy in Westwood. Having spent 7 years obtaining 2 degrees from the University of Southern California and its law school, my discomfort is hopefully understandable. When I got my first LAist assignment, to cover the UCLA Undie Run, I was entertained and yet conflicted to say the least. I went and checked some of the photos from the previous year's event, which apparently is a tradition where students run across campus in their underwear at the culmination of finals week. Roughly 5,000 students.

In college, and with enough alcohol in one's system, it is certainly understandable that people are going to want to run around naked. When I was a senior at USC, I made the mistake of getting skunked at foosball, a pastime at which I was never proficient, 10-0. The standard humiliation for such a failure was, and hopefully still is, a naked run down the length of 28th Street between Figueroa and Hoover. Wearing nothing but a killer pair of New Balances, I sprinted in front of the rows of sorority and fraternity houses that line 28th Street at around midnight on a Saturday. When I crossed University Ave. though, dead center of The Row, I caught the toe of my right shoe and ate shit spectacularly into the asphalt. It must have been quite a site, a virtual train-wreck of skin, pavement, and blood. I picked my big ass up, finished the run, and didn't get arrested. So the night was a success, not counting of course the subsequent hangover and full battery of mystery abrasions, lacerations, and contusions I discovered the next morning. I am hoping that tonight's participants, or shall we call them victims, fair better than I did. Accomplishing such a result, fortunately, will require a level of competence only slightly higher than tying one's shoes, so I am not expecting to see any senseless bloodshed.

So here I am in this unholy place, and I am here to photograph college co-eds jogging in their underwear. It's somewhere on the spectrum of the surreal between a dream that verges on nightmarish and eating 10 hits of acid and heading to Disneyland. It should be fun, but it could get a little weird. Hopefully the ubiquity of digital cameras in our society will trump the fact that, some 10 years older than my subjects and fully clothed, I might as well be a dirty old man in a raincoat taking spank photos.

So with several hours to kill before checking out the festivities, I decided to check out one of the fine local watering holes in Westwood, O'Hara's. Formerly Maloney's, a mainstay of the Bruin student body during my day as an undergraduate, this basic sports bar about a block from campus serves up predictable pub fare. The wings are decent and the beer is cold, so I am happy. I do find it odd that a place like this, so close to campus, is dead at 10:00. I am starting to think that finals aren't over yet. Either that or the Bruins are a bunch of pussies who haven't discovered beer yet. I have been in this very location several times and have seen collegiate shenanigans at their finest, so I am going to go with the former. I am thinking that the real hardcore heads are getting in their unmentionables, chugging Jaegermeister, and running through sheets of plate glass right now. Those kids get a pass in my book.

I just found out that the starting point of the 2007 Undie Run was changed at the last minute due to concerns about potential "noise and property damage". Now I am officially excited. Instead of well-wishers handing out bottles of water and Gatorade, I am sort of expecting other drunks without the guts to actually nude up to be handing out bong hits and Solo cups full of Bud Lite.

I hear a crowd in the distance, as in a really large crowd a couple of blocks away. Ambulance crews have stationed themselves in the corners of Bruin plaza. There are a few people milling around, but no real signs of a full-fledged ruckus as of yet. Well except maybe the paramedics, but that's pretty standard I would imagine.