Ask the MACist — Connect Your Mac to Your XBox360 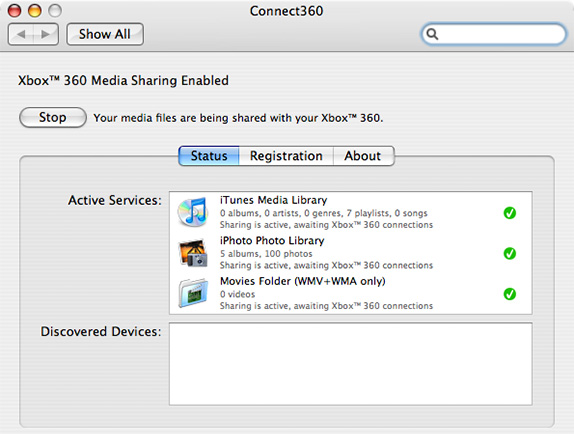 Welcome to the latest edition of "Ask the MACist" the column where I answer your Macintosh and technology questions. Our question this week comes from Larry in Culver City. He asks: "I've got a Mac and I've got an XBox 360. Is there any way to get them to talk to each other?"

Like Larry, I to am an avid XBox 360 user as well as a Macintosh lover so I have also been searching for a way to get those two great technologies to work together. Fortunately for Larry and myself (and the rest of you out there with a similar problem) there's a great solution that can satisfy our needs.

What is this solution? Well, its called Connect 360 and its from the folks at Null River software. Really, the XBox 360 is fully capable of playing your music, video and photos on your television. All that's needed is a way to make it happen. Connect 360 serves that purpose.

Some of Connect 360's features include many of the things a good Mac to XBox connector should do. For example, Connect360 automatically indexes your iTunes and iPhoto libraries and shares them to your Xbox 360. You can then use the Xbox 360 dashboard to browse and play your media, organized in the exact same way that it is on your Mac. Plus, the software also supports streaming of live Internet radio broadcasts to your Xbox360 from your Mac. Simply add any station to a playlist on the Mac and then listen to it via your console.

In addition, you can also view your iPhoto library using the software the same way you can with your iTunes library. Your photos are indexed and show up on your 360's dashboard for viewing on your TV. And, much like Apple TV, the software allows for WMV and WMA video sharing, which enables you to stream HD quality video from your Mac to your living room. Although, it doesn't support Quicktime or any protected content aquired from the iTunes store -- which I'm sure AppleTV will.

Connect360 works with both the Xbox 360 built in network port (wired) and the Xbox 360 WiFi adapter. Connect360 will automatically detect your Xbox 360 and your Xbox 360 will automatically detect your Mac running Connect360. At the moment, the software supports these types of formats for audio: MP3, AAC, WAV, AIFF and Apple Lossless. For pictures: JPEG, RAW, GIF, PNG, BMP and TIFF. For video streaming, currently only WMV and WMA files are supported but according to Null River, they are working to enhance that.

So, if your looking for a way to get your content off your Mac and out to a TV then Connect360 software might just be the ticket for you. It works great for me, within its limits. At the moment, over at Null River they offer a feature-reduced demo for you to check out the product which limits you to 100 pictures and 100 songs. If you decide to go for the full product, it will cost you only $20.00 -- not bad, expecially if you already sprung for a High-Def TV and an XBox360.

Although, I did just get the shipping notice for my AppleTV today so once that arrives, I may be rethinking my audio/video sharing setup. And, I'll also be reporting back on how well (or how poorly) the AppleTV works for me. Until then, this software does the job nicely.

Ok, that's it for this week's 'Ask the MACist.' But remember, if you have a question about anything Mac, Mac-related, or even something about other tech like TiVo, cell phones, Blackberry (or even Windows), send it to me, The MACist, at: themacist at gmail dot com.