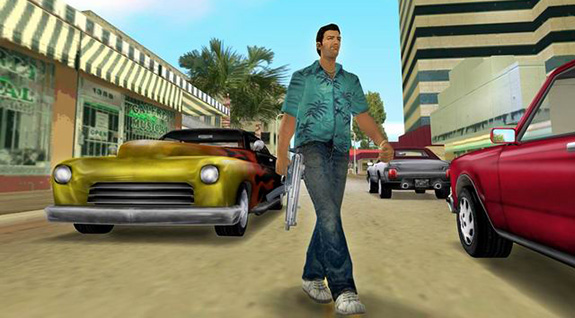 • Is Viacom engaging in a bit of hypocrisy when it comes to enforcing copyright on its programming? Maybe so. Take a look.

• Did Viacom overstep its bounds a little when issuing those takedown notices for videos over at YouTube? Some people think so and are suing.

• In other more pleasant Google news, one of its European execs let slip that the company is indeed working on its own mobile phone — just like Apple. Perhaps it will be called the GPhone? That would be kinda cool.

• In other Apple news, some are predicting the release of Apple's much-anticipated update to Mac OSX -- known as Leopard -- to come out as early as May.

• That other online search giant Yahoo is in some hot water for turning over evidence to China that helped convict a pro-democratic writer.

• Take Two, publishers of the upcoming Grand Theft Auto 4 and Manhunt 2, turned the tables on video game hater (and jackass) Jack Thompson by preemptively suing him instead of waiting for him to sue them in an attempt to block the release oft heir new games.

• Speaking of video games, IGN confirms that the much-anticipated Halo 3 will be released this September. No, you can't pre-order it yet, sorry.

• Your ISP may be selling you out by selling info about your web clicks. Why is this bad? Check it out.

• Former gaming giant Nintendo seems on the rise again thanks to sales of its Wii console. In fact, it was number one in sales for February.

• New Web 2.0 darling Twitter seems poised to either be the "next big thing" in social websites or die a quick death. Don't know what Twitter is and want to find out what all the fuss is about? Go here, here and here.

• My favorite photo sharing site Flickr is going after the Hong Kong market in a big way. Good for them. All those people with all those cameras need a place to show their photos. Why not on Flickr? Although, I would love the site a little more if it wasn't owned by Yahoo. Oh well.

• Microsoft tells its MVPs at a recent event that the company is "in it to win." Unfortunately, some people with a large readership are not convinced.

• And in somewhat tech-related news, 2007 is the world's warmest winter ever -- according to the an agency that tracks that kind of thing. The aptly acronymed NOAH. No kidding, we could have told you that. Just look outside.