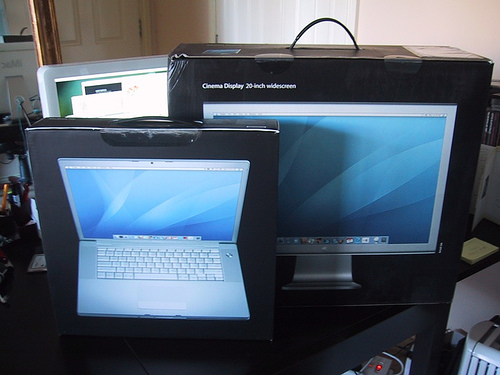 Welcome to the LAist weekly tech news roundup. Each week I'll be bringing you the latest, and hopefully most interesting, technology news from around the city, the state, the country and maybe even the world. Also, if you have any news, tips or things of interest you want to point out, feel free to drop me a line at: themacist [at] gmail dot com. Now, let's get to the news:

A woman with a bionic arm has regained her sense of touch. No word yet on if she's also better, stronger or faster. No matter what this is amazing news and I, for one, welcome our new bionic overlords.

Apple releases iPod Shuffle in Colors! Woo hoo more stuff I don't need. Come on Apple, how about spending some time working on that new 12" MacBook Pro that I, and many others, want? You can make that in colors if you wish — just as long as Black or Silver are two of them.

The latest version of Microsoft Windows, called Vista, came out this week. Windows fanboys and girls rejoyce because its new and improved and now only three years behind Mac OSX. Plus, Bill Gates tells us why Apple is a bunch of big fat liars.

Bill Gates says Windows Vista is so secure it could run life support systems. Even though he seems sincere and to really believe what he's saying remind me to try not go go to a hospital where all the life support systems run Windows. That's a little scary to me.

Speaking of Vista, apparently there's already a security flaw -- in the speech recognition software. This supposedly allow a PC to tell itself to delete files. Well, that does sound secure, doesn't it?

Oh, and apparently Vista's DRM implementation has been hacked already. Come one, its already been out a week. What took so long?

Apple is now offering a fix for iTunes for free to all Windows Vista users. It seems iTunes is also broken when people upgrade to Vista and they are not able to play their purchased music anymore.

Viacom has its panties in a wad and is demanding that YouTube take down about 100,000 video clips from Viacom-owned properties including MTV Networks and BET. Viacom said its pirated programs on YouTube generate about 1.2 billion video streams, based on a study from an outside consultant. Well, there's the problem -- you can't trust consultants.

Verizon will be getting a crack at the Palm Treo 700wx and will get a slightly better version of the smart phone than rival Sprint. Good for them as some part of me still believes in Palm and its Treo -- even if these do run Windows Mobile and not Palm's OS. Actually, I'm using a Treo 680 at the moment and so far, so good. However, it all might change come June when iPhone comes to town.

Fortune tells you how to buy an HD TV just in time for the Super Big Game this weekend. I agree with most of their points except for the Logitech Harmony Universal remote. Never had much luck with those. Maybe it was just the one that I had. I'm happy to try it again so if any Logitech reps are reading this feel free to send one over to me for "evaluation" purposes.

Oh my God! Beware the hazards of online dating! This article gives you the scoop -- warts and all.

The good folks at Adium have released version 1.0 of their multi-IM application for the Macintosh. It's a great little program that I use daily for all of my IM needs. Best part? It don't cost nothin'.

Flickr users (especially Thomas Hawk) are pretty upset over the announcement this week that they will be forced to merge their Flickr accounts with a Yahoo account if they want to continue to use Flickr after March 15th. I'll admit its sorta annoying but I'm not really that upset about it. I have accounts everywhere, including Yahoo, so is no big deal for me to merge it with my Flckr account.

The real bummer is that you are now limited to only 3000 contacts and 75 tags per photo. That's not a big deal to me as I don't have nearly 3000 contacts (or 300 for that matter) but for those who do, I can see how that could be bad -- especially as they have to drop anyone over 3000. I'm sure I'll get dropped from a few people's contact lists.

Maybe Courtney Love isn't as dumb as everyone thinks she is? Or, she's got a pretty smart ghost writer. Still, I hate math but this little peek into the record business is pretty interesting.

Lastly, I'll poke a little more fun at Microsoft and Windows Vista. Instead of words, however, I'll use the power of comics!