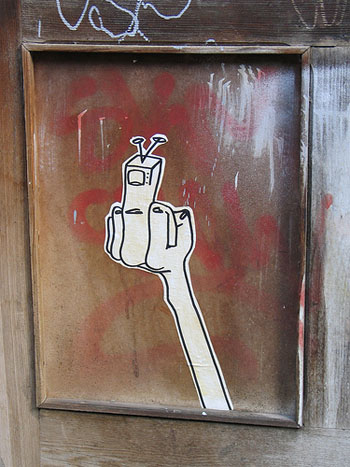 Dashing the plans of churches around the country, particularly in God-fearing law-abiding Midwestern towns in Indiana and Illinois whose teams are playing in the big game, the NFL yesterday reiterated that large groups watching the Super Bowl on a tv bigger than 55" is unlawful based on the Copyright Code.

But the main reason that the NFL is against big groups (like church congregations, social clubs, orphanages...) is because the antiquated Nielson ratings systems do not allow for Nielson families to record tv shows that they see outside of their own home.

"We have contracts with our [TV] networks to provide free over-the-air television for people at home," NFL spokesman Greg Aiello said. "The network economics are based on television ratings and at-home viewing. Out-of-home viewing is not measured by Nielsen."

Pastor John of the Fall Creek Baptist Church in Indy posted this message to announce that the church had to cancel its Super Bowl party because the tv that they were planning on watching the game with their congregation was too plentiful:

We regret to inform you that we have had to cancel our bash to view the Colts game this Sunday in a family friendly environment due to the fact that the NFL believes we would be in violation of the Copyright Act, because we had planned to show the game on a screen bigger than a 55 inch diagonal. We have appealed to their legal counsel and exhausted all options without success. We have been informed that the only exceptions to view the game are given to sports bars and restaurants. While we have argued that we only intend to provide a family oriented environment that will make no profit from the showing, the NFL claims that our event cannot proceed by law. Therefore, we have no choice but to challenge this in court or cancel the event. We choose to cancel the event. We deeply regret that we have been prohibited by the NFL from providing a family friendly environment for celebrating the Colts great season.

This sort of ultra-sensitivity (aka nonsense) from the NFL is nothing new, recently the Washington Post ran a piece about how businesses can't even say or write "Super Bowl" on their mailers or ads without paying the NFL millions.

So what can the churches do? Especially those who get together for big events and share them, as, you know, a congregation? LAist believes the Christians should hit up their boy President Bush.

W claims to be a Christian. Yesterday Bush attended the National Prayer Breakfast in Washington D.C. and said that the USA is "a nation of prayer" adding that God "pours His grace on those who seek Him in prayer."

But since the Constitution doesn't (yet) allow God to change restrictive, foolish laws or codes, perhaps the Commander-in-Chief could appeal to his Christian base and pressure lawmakers to exclude non-commercial large groups to huddle around the tvs on Super Bowl Sunday.

Sure it's now Super Bowl Friday and Congress is probably beating the weekend traffic, but BushCo seemed to have no problem flying from Texas to DC on Easter to pass legislation to put a feeding tube in a brain-dead woman's mouth.

One would think that with Bush's record-low approval rating, this might be the Hail Mary that the GOP could use to prove that the People are more important than the Nielson Rating (which will already be massive). Or the Right can continue their business-as-usual bending over to Big Business at every turn, and let the next administration (probably a Democratic one) be the Good Guys on this issue.