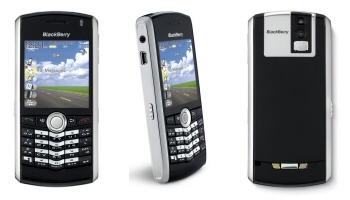 Welcome to the latest edition of Ask the MACist, the column where I answer your Mac and Mac-related questions with hopefully more clarity and insight than you could ever need. As always, I want to thank those of you who sent in questions this week. They are much appreciated. Keep it up!

And remember, if you have a question about anything Mac, Mac-related, or even something about another technology like TiVo, cell phones or whatever, send it to me, The MACist, at: themacist at gmail dot com. Ok, let's get to it.

Our question this week comes from Tom in Los Angeles. He asks: "I've been in the market for a good "smartphone" for a while. Basically I wanted something that could keep my calendar and contacts (synced with my mac). Of course, the answer was announced at Macworld, but I'm going to wait for the 2nd generation model...so they can work out the kinks. In the mean time, I just purchased a Blackberry Pearl but am having some syncing problems. Do have any advice on how to get my new baby to play nice with iCal and Address Book?"

I hear you about the iPhone Tom. It could very well be the Holy Grail of smartphones. Although, we won't really know much about how it works until we actually get our hands on one and can put it through its paces. In the meantime, in the world of smartphones you can actually buy today, the Blackberry Pearl is a fine choice that many people make — including Mac users.

Sadly, for a long time Mac users felt like they had taken a backseat to their Windows-using friends -- at least where compatibility to their Blackberry was concerned. Fortunately, there was a bunch of smart guys and gals at a company called Pocketmac who saw the problem and decided to do something about it. To help their fellow Mac users sync contact and calendar data between their Macs and their Blackberries, they invented a program called Pocketmac for Blackberry.

This program allows you to sync your iCal and Now Up To Date Calendars, Address Book, Entourage Contacts and Appointments, and even Sticky Notes between your Mac and your Blackberry. And yes, it even works with the Blackberry Pearl. In fact, the makers of the Blackberry liked the software so much they decided to license it from Pocketmac, and now provide it for free to all Mac-using Blackberry owners.

So, head on over to RIM's website (the makers of the Blackberry) and download Pocketmac for Blackberry, install it and sync away. The instructions are pretty straightforward when you install the software. After installing it but before running it, connect your Blackberry to your Mac with the USB sync cable. That way, Pocketmac will recognize your Blackberry when it opens.

Then, there are various tabs where you can select which programs you want to sync with your Blackberry. For me, it was Apple’s iCal and Address Book and nothing else. I don’t sync Stickies, Now Contact, Entourage or anything else. I also don’t have my email redirected out to my Blackberry. However, that is an option that some people choose to take advantage of. Basically what it does is give you almost true “push” email functionality even from your email accounts that are not “push” – such as most POP and IMAP accounts.

Your email comes into your Email client and then Pocketmac takes that mail and sends it directly out to your Blackberry using its unique PIN number. That way, email gets to you almost instantly instead of it taking minutes or in some cases hours to reach you. Its an interesting feature but in my testing I haven’t found it works as well as the Windows version that integrates with Microsoft Outlook and comes standard with the Blackberry. Plus, you need to have your computer on and checking email all the time for this feature to work.

Really, I’ve had the best luck simply configuring any other email accounts I want to have sent to my Blackberry directly from the provider of my Blackberry service – which in my case is T-Mobile. Email pretty much comes to my Blackberry just as fast as if I was using the redirector and I don’t have to worry about having my computer on all the time and having my email program open all the time.

So, for you Mac and Blackberry users out there, Pocketmac is the tool of choice allowing you to get the most out of your Blackberry. Although, who knows, maybe the iPhone will end up being the answer to everything? Or, it will have just as many issues as most other smartphones already have? Whatever the story end up being, we’ll find out in June.