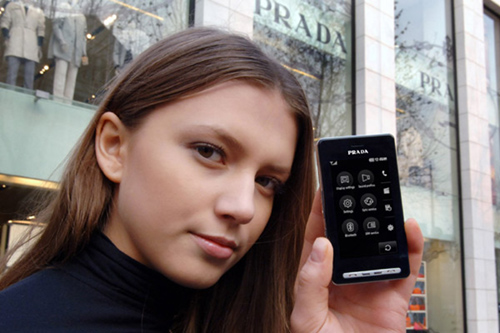 Welcome to the LAist weekly tech news roundup. Each week I'll be bringing you the latest, and hopefully most interesting, technology news from around the city, the state, the country and maybe even the world. Also, if you have any news, tips or things of interest you want to point out, feel free to drop me a line at: themacist [at] gmail dot com.

Now, let's get to the news:

The iPhone has got some competition already. Meet the Prada Phone from LG.

For you Blackberry and Palm users, you can get your iPhone fix by using a skin for your Blackberry or Palm to change the appearance of your device so it looks like the iPhone.

Apple will allow those of you with recent Core Duo 2 Macs to unlock your wireless N potential and use your Airport cards with the new speedier N standard. They say its free but it actually will cost you $2.00 in "taxes." Ah huh.

Thanks to some enterprising kids, you can now get GPS support on your Sony PSP. You do have a PSP, don't you?

Microsoft will offer several options for those of you who will be upgrading to Windows Vista including some first ever online options.

The TJX companies, owners of such retail outlets as Bob's Stores, HomeGoods, Marshalls, T.J. Maxx and A.J. Wright suffered a massive security breach this week on the portion of its network that handles credit cards, debit cards and other purchases. At the moment, they don't know how much data was compromised. Good thing I don't shop at those stores.

Not that you would want to do this but you can now run Windows on your PS3. That is, if you can find a PS3 somewhere.

The family of a California woman who died after participating in a radio station's water-drinking contest to win a Nintendo Wii will sue the station, their lawyer said on Thursday. Who knew you could die from drinking too much water?

Lastly, some tips on how to be a curious photographer. Good reading.