Do You Know the Tamale Man?

by Lindsay William-Ross in FoodMiscellaneousNews on January 15, 2007 12:00 AM
Tweet 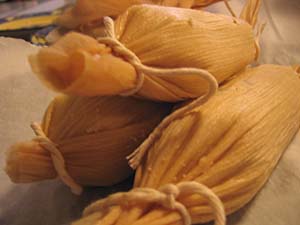 Every Sunday morning, somewhere in the environs of the unholy hour of 7:30 a man parks his truck on the street outside my apartment, unloads a cooler full of tamales, and proclaims his wares are for sale.

And it drives me nuts.

Firstly, I would have to say this disturbs me because frankly, I hate tamales. I know, I know, this makes me the scourge of the earth in some people's eyes, but I can knock 'em since I've tried 'em, and of the many times I've tried the many varieties, I still don't like them. And there aren't many foodstuffs I hate. Trust me. But I hate tamales. It's all in the texture, methinks. Once husked, they have this moisture-slick coating that clashes with my palate; couple that with the general mealiness of the steamed cornmeal coating, and you have a recipe for something I can't digest. The fillings, no matter how deliciously spiced—and you'll attest your mother or your aunt or your cousin is the best tamale maker around, so I'll surely be converted—I also don't enjoy. It's all just kind of blah to me. I don't see the lustre. I'm not a fan.

So, that said, if the man with the cooler who pulled up to my curb at the crack of dawn each Sunday were hawking, oh, perhaps, "Chicken Satay!" or "Lamb Korma!" or "Coleslaw!" or "Donuts!" I might be just the slightest bit more inclined to put myself on his customer list. Just the slightest bit, however, because, civic-minded as I am, I've got a bit of a "board of health" quandry. Does the man have a permit to sell these tamales? Is it within the law for him to do so? I actually posed that question to several people gathered together once for the purpose of discussion (okay, fine, I brought it up to my English 102 students last quarter) and their response was laughter. No, of course he doesn't have a permit, they told me. And you don't go calling the cops on him. Besides, they pointed out, his tamales are probably really good.

So it's back to that again. Which we know is moot for me. So why elese does the tamale man drive me nuts?

Well, for another thing, I'm admittedly over-sensitive to external noise. You know, like people cruising around with their car stereos' bass levels set to the max, kids working out their latest skateboarding moves (with little success) in the driveway, my neighbors having sex on the other side of my bedroom wall. So to hear "Tamales!" shouted into the otherwise lovely quiet is a bit jarring. It doesn't actually wake me up, mind you. I'm an early-riser most days, and so this scenario usually plays out while I'm luxuriating under the covers, mulling the idea of indulging in more sleep or reaching for the remote to dial up an episode of Law & Order: SVU on the Tivo. It woke one of my neighbors up one Sunday, that's for sure; in response to his hawking, the Tamale Man got a vociferous "Shut the fuck up!" from one of the many street-facing windows in my building. I laughed. I've never taken it that far, and not even a hard-won hangover would be likely to make me, either.

Now even though the Tamale Man drives me bonkers, after so many months of this routine, I'd be a little sad to see him go. He's become a sort of mythical figure in my household; one roomie hears him while she's awake but in bed, like me, and the other roomie is never home on Sunday morning, having developed a preference to awaken in her boyfriend's bed in another neighborhood, sans Tamale Man. To her, the Tamale Man is a sort of legendary figure, like the Tooth Fairy or the Easter Bunny, because he comes and works his magic and she never, ever, catches him. I suspect to many heavy sleepers in my 'hood the Tamale Man doesn't exist, either. Maybe they're missing out. Maybe, you'll suggest, I'm missing out, because I don't drag my ass out of bed to exchange my dollars for his product.

Maybe. The Tamale Man drives me nuts, but I'm okay with him coming around. It's kind of comforting, and a glimpse of perhaps another way of living that a life-long Canadian-American Urbanite such as myself might otherwise not get to have. So shout away, Senor Tamale, and I wish you brisk sales.

But I still hate tamales.